EPICURIOUS: Meet the Lil’wat chef who has been baking bannock for nearly 20 years

Maggie Wallace working towards Red Seal certification, with dreams of opening her own café
Apr 23, 2021 2:00 PM By: Brandon Barrett 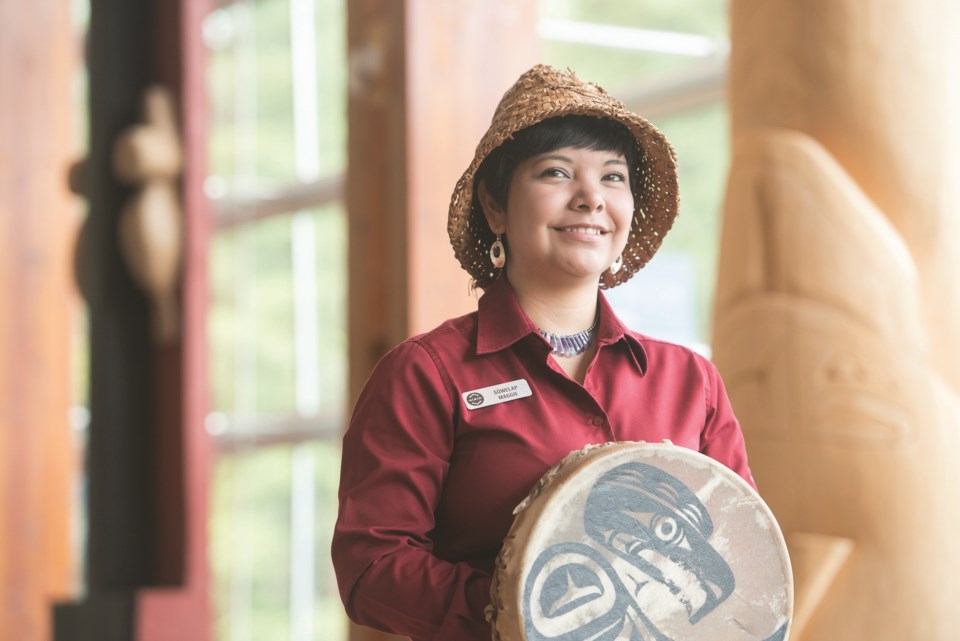 Lil’wat chef and Squamish Lil’wat Cultural Centre ambassador Maggie Wallace recently completed Level 2 of her Red Seal certification, and has visions of one day opening her own café alongside her older sister.Photo submitted

Maggie Wallace has baked a lot of bannock in her day.

The 28-year-old Lil’wat chef has been making her version of the Indigenous fry bread since she was a child, and now working in the Squamish Lil’wat Cultural Centre’s (SLCC) Thunderbird Café, she has had ample opportunity to perfect the recipe. (Wallace also works as an ambassador at the museum.)

“Bannock is something my mom would make for us growing up all the time. It was one of the first things that I did learn how to make. I’ve been making bannock probably since I was about 10 years old,” she said. “You make something for so long, you perfect it and it just becomes like breathing.”

For Wallace, bannock is an almost daily part of her life, but for scores of guests, it’s often their first introduction to First Nations cuisine. In fact, bannock is something of a Trojan horse for First Nations cooks, often combined with foods that are more familiar to non-Indigenous palates, like tacos and burgers.

“The element of bannock is what draws people in, but sometimes the cuisine can be a little bit out there for the common diner,” Wallace said.

It’s a story that has persisted for generations: marginalized communities having to cater to the tastes of the dominant monoculture to make ends meet. New Chinese immigrants to North America in the late 19th century, for instance, often included standard Western dishes on their menus, while chop suey, a dish you’d be hard-pressed to find in mainland China, has its roots in the Chinese-American diaspora, originally created to make use of whatever leftovers a cook had lying around.

Now Canada’s original inhabitants are fighting to reclaim the identity of a cuisine that was, like so many other elements of First Nations culture, systematically ripped from them. People like Squamish Nation’s Paul Natrall and his Mr. Bannock food truck and Inez Cook, owner of Vancouver’s Salmon n’ Bannock eatery, have been making headwind on that front, but Wallace is hopeful that diners will take the onus themselves to delve deeper into Indigenous cuisine.

“Just being more open-minded towards some of the … ways we would approach food,” said Wallace.

At the core of Lil’wat cuisine is an appreciation for the ingredient itself, Wallace said, showcasing a product’s inherent natural flavour.

“I feel like when it comes to First Nations cuisine, you’re more focusing on the raw item,” she added. “It’s not getting blended in with so many different herbs and spices. It’s not being covered up.”

When it comes down to it, most British Columbians should already be primed to appreciate Indigenous food culture, given the province’s penchant for ingredient-forward cuisine and abundance of quality game, produce and seafood that other parts of the world can only hope for (or import).

In fact, Ottawa has seemed to recognize the immense potential for Indigenous cuisine with the launch, in 2019, of the Indigenous Culinary of Association Nations, a joint effort between the federal government and the Indigenous Tourism Association of Canada that is focused on developing and marketing the country’s diverse Indigenous culinary experiences to the world.

Wallace also sees the potential for culinary tourism, but said that First Nations chefs like her need better access to education and training in order to expand the sector to its fullest potential.

“The challenge is finding a school or even making it to the school because there isn’t a local program that’s actually being run through a local school,” she said.

Just this week, Wallace passed Level 2 of the Red Seal chef certification program that is being offered through Camosun College on Vancouver Island. Thankfully, the program moved mostly online earlier in the pandemic, which meant Wallace didn’t have to make the long commute to the island for her Level 1 exam last year.

Once her Red Seal training is done, expected for next spring, Wallace has visions of opening up her own restaurant—with some help from her big sister.

“She’s gone to school for accounting so she would be able to help me balance the books. It’s been a dream of mine and my sister’s for a long time,” she said.

The Squamish Lil’wat Cultural Centre is set to reopen on April 28 after being closed for building upgrades. Visit slcc.ca for more.

Fork in the Road: Deli from hell—Featuring pre-cooked seafood, scorched greens and field-boiled jam
Jul 27, 2021 9:00 AM