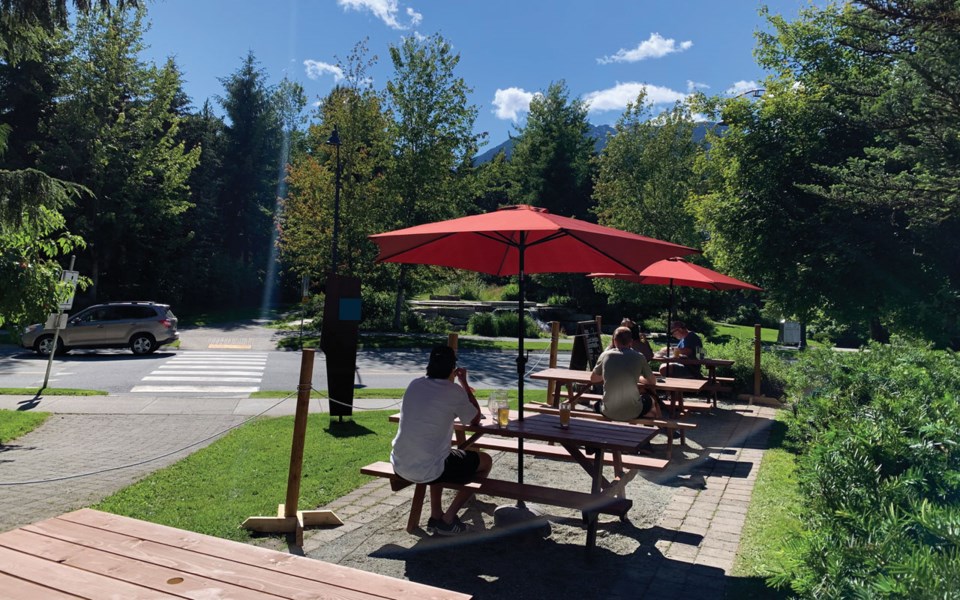 In a year where restauranteurs had to make great adaptations to get up and running again after the COVID-19 shutdown this spring, one of the most welcome was finding extra patio space.

After the Resort Municipality of Whistler (RMOW) council voted to allow extended patios in June, Pizzeria Antico manager Christine Grant was glad to convert a small bocce park into a temporary patio, allowing for 24 additional seats to bring the restaurant’s total outdoor capacity to 54.

“It’s been incredible. It’s been a lifesaver,” she said. “For us, particularly, it’s given us so much exposure based on where the patio extension was. It’s so visible to the streets. A lot of people didn’t even know we had a patio.”

Grant noted, however, that it was difficult to make the most of the entire space, given that the tables are set up as six-seaters.

Pizzeria Antico had long hoped to utilize the park, so it was an obvious choice when the allowance was made.

“When this opportunity arose to use it as a space, and put some tables out there to add some more outdoor seating, it just made so much sense and it worked out really well,” she said.

Just up Main Street at Crepe Montagne, manager Nicole Leddy appreciated the six additional seats she was allowed, though she had hoped for more. The eatery’s patio was initially licensed for 19 seats, but was only capable of seating 12 because of distancing. Ultimately, they ended up back near where they started.

“We are a small restaurant, so the program allowed us to have a couple additional seats,” she said. “We tried to get more, but after working with the muni, we had to lower our expectations.”

The demand, Leddy said, was present, so she was appreciative of the opportunity to serve those customers at a time when every order counts.

“Those seats were full all the time. Definitely, customers wanted to sit outside, so I consider that we’re lucky in that we have an existing patio and we were able to add on a couple tables,” she said.

“Businesses demonstrated that they could accommodate, on average, only 43 per cent of their licensed seating capacity as a result of public health officer orders for physical distancing,” he said, noting the added seats increased that capacity to 54 per cent.

Restaurant Association of Whistler president Eric Griffith said the feedback he received from members was that it was a simple process to apply, and while the early backlog was a couple weeks’ wait, he felt it wasn’t unreasonable considering the circumstances.

“It was successful for those that had the adjacent space that was easy to take up,” he said.

However, some eateries were unable to take advantage of the offer for reasons ranging from being located away from ground level to an inability to gain strata approval. For his part, Griffith, Alta Bistro’s owner and wine director, declined to pursue the option as it wasn’t the right fit for his establishment.

“I’d looked at the places I could use and it really just became part of the roadway,” he said. “I didn’t think that was the best guest experience for what we were offering.”

Though the program is set to end on Oct. 31, at its Sept. 15 meeting, Whistler council passed a resolution that council direct staff to bring a report with options to expedite the winterizing of food and beverage patios for the coming winter season.

Griffith said, heading into winter, the most beneficial change for eateries would be for provincial health orders to reduce the required space between tables and increase capacity again, with winter patios are a non-starter for many businesses as the costs could very well outweigh the benefits.

“How are we going to make people comfortable outside in Whistler with the temperatures we have?” he asked. “I’m not sure how the winter patios are really going to work unless you have a massive investment in infrastructure.”

Grant said Pizzeria Antico will not have the ability to run one.

“Unfortunately, it’s going to be a huge impact,” Grant said. “We don’t have any of this area covered and when that goes away along with the weather changing, it’s basically almost a 45-per-cent decrease for us in capacity.

“We’re hoping that we can still sustain ourselves.”

Similarly, Crepe Montagne will not run an outdoor patio. However, with barriers between tables, Leddy hopes to be able to run at regular capacity throughout the winter.

“The owners have done a good job of putting up the barriers within the restaurant to make sure that the guests are as safe as possible and protected while they’re inside,” she said.

When next summer comes around, restaurants are supportive of seeing the program return, with Grant describing Pizzeria Antico’a approach to the extension as a test that it can point to in support of its continuation.

Crompton, however, said there have been no discussions as to the program’s future at this point.

“Our focus right now is on ensuring that we are nimble in our response,” he said. “We haven’t put our mind to whether this program will carry on after the pandemic.”