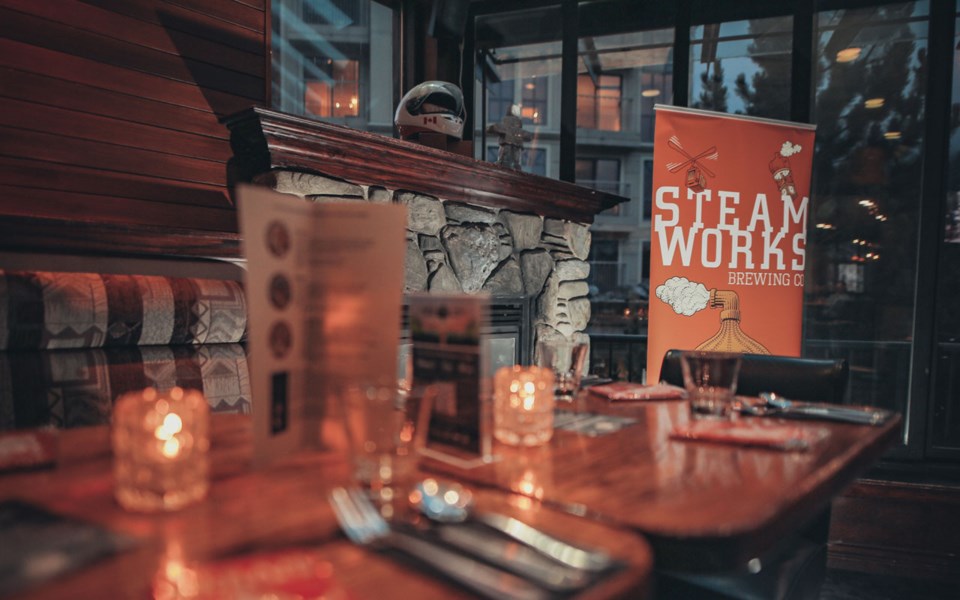 CRAFT CHEERS Black’s Brewmaster dinner in partnership with Steamworks was a popular event during Whistler Craft Beer Month, which runs through October. Photo by Rob Perry

When Gibbons Whistler had to pare back the popular Whistler Village Beer Festival in September—including cancelling its two-day main tasting event—there was still more craft beer to celebrate.

So, they thought, why not continue the festivities for an entire month?

“We can’t get 5,000 people together in a closed-in environment because you can’t do gatherings right now,” said Joey Gibbons, CEO with Gibbons Whistler. “But we’ve got all these relationships. The breweries all love to come to Whistler. We’ve always been super inclusive with other venues and hotels in town and worked closely with the Resort Municipality of Whistler. One thing Whistler does better than anyone else anywhere else I’ve done business is our ability to collaborate and work together on initiatives.”

To that end, the company decided to host the first-ever Whistler Village Craft Beer Month throughout October, in collaboration with Tourism Whistler and the Resort Municipality of Whistler (RMOW). The latter two organizations provided funding and led marketing, while Gibbons was hired to execute the initiative and leverage their industry expertise and partnerships, Gibbons said.

From Oct. 1 to 31, various venues around town have teamed up with a range of B.C. breweries to host different events.

“There are so many incredible craft breweries from around the province,” Gibbons said. “People are passionate about what they do and what they’re about. You get them up here to tell their story and it’s this wonderful thing.”

One example: the Steamworks Brewmaster Dinner that took place on Oct. 8 at Black’s Pub. It sold out (although, these days, that means 30 tickets rather than 200).

“I saw our own team get excited about it,” Gibbons said. “These are hard times. [We’re] trying to get people together in a safe way for celebration in a time of such uncertainty.”

Depending on your perspective, events are either half over or half left. For the coming weekend, they range from a beer-infused dinner with Howe Sound Brewing at Stonesedge Kitchen to Deep Cove Tap Takeover & Slider Pairings at The Longhorn Saloon and Brunch Brews with Coast Mountain at The Raven Room.

Gibbons said he doesn’t have one specific event he’s looking forward to, but rather, it’s “more about hearing from venues that are appreciative—almost other people’s places moreso than my own. I love seeing our team celebrating and going on their own to enjoy it, but I love seeing the collaborative work in the community and seeing people get on board.”

Yet another glaring omission on the year’s events calendars is Halloween. One event to help fill the gap is the Halloween Tinny Takeover with Backcountry Brewing at Garfinkel’s on Oct. 29 from 4 to 10 p.m.

Across the province, new rules have meant that nightclubs like Garf’s have had to adjust their hours—and keep music to a talking level—which has presented challenges.

“We went from being a place with a lineup and 330 people dancing to closing at 10 p.m. and no music above speaking levels,” Gibbons said. “When you’re in a business where you get happiness from serving others, it’s tough. It’s tough for our team. Being able to do something we enjoy is a win. We’re doing stuff and other places are getting on board and bringing energy.”

While adhering to public safety rules has been a challenge, it’s necessary, he added.

“Most everyone does it in a nice, safe way and follows rules out there,” he said. “Every day is tough and it’s hard on the managers, staff, authorities, mayors, CAOs—everyone. But we’ve got a tough team, a tough town, a resilient town. Local entrepreneurs are out there hustling and have been doing it for seven months straight, trying to stay alive, trying to keep banks happy, and pay the bills and understand what the rules are.”

So far, the craft brewery events have drawn visitors up to Whistler for the weekends.

“People are coming out from Alberta, even Montreal,” Gibbons said. “I think we’re going to see Whistler like it used to be a while ago where we saw a lot more Canadians and people from the North Shore.”

To see the full list of events running through to Oct. 31 and to get tickets visit gibbonswhistler.com/festivals-events/whistler-craft-beer-month/schedule.

Editor's note: this story has been updated to reflect the roles of Tourism Whistler and the RMOW in this event.

FORK IN THE ROAD: All they need is love, love
Sep 27, 2020 12:00 PM
Comments
We welcome your feedback and encourage you to share your thoughts. We ask that you be respectful of others and their points of view, refrain from personal attacks and stay on topic. To learn about our commenting policies and how we moderate, please read our Community Guidelines.