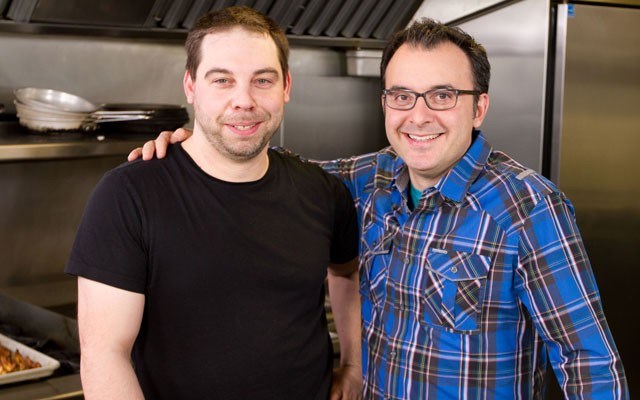 KITCHEN Chef Randy Jones, left, met the host of You Gotta Eat Here when John Catucci dropped in to check out the Mile One Eating House in Pemberton. Photo by Josh Henderson

Pemberton was buzzing last weekend with the arrival of John Catucci and his Food Network Canada production crew from the show You Gotta Eat Here.

Catucci popped into the Mile One Eating House for two days of filming with Randy Jones and his team at the restaurant.

It turns out Pique Newsmagazine played a key role in Mile One being chosen for the show. Rachel Horvath, the show's senior producer and vice president at Lone Eagle Entertainment, says her research team learned about Mile One due to the restaurant's success in the annual "Best of Pemberton" survey results published by Pique.

"I believe that your readers had voted it best restaurant, best value and best chef," says Horvath. "We did our own investigation and thought it would be great for our show."

Host John Catucci was in Pemberton to shoot show segments on March 7 and 8. The first day of shooting was spent in the kitchen with the chef and the second day focused on the dining room.

"It is a really great opportunity to hear from true fans of the restaurant and what their favourite dishes are and why they love it there," Horvath says of the second day of filming.

The real magic for any show lucky enough to land a spot on You Gotta Eat Here comes after the production team packs up and leaves. When the final product hits the air. Horvath says most places experience a spike in traffic.

"We have heard that the morning their episode premiered they've had lineups before they're even open for the day, and that they'll be slammed that whole weekend," Horvath says. "They can always tell when the show re-airs because, again, they'll get that real hit."

Some of the fans of the show are so keen that they reportedly plan vacations based on what they see on You Gotta Eat Here.

"It's definitely a boost economically for the restaurants," Horvath says.

Chef Randy Jones was pleased with how the TV shoot went. It was a busy couple of days but he says the extra work was worth it.

He's looking forward to learning when the show will air and then sharing that date with fans of the restaurant.

With the dust settled, and Catucci moving on to his next restaurant, Jones laughs and shares the story of a recent brush with national attention.

"We had a regular guest in a washroom in Ottawa talking to his buddy and somebody at the urinal overheard them talking about Mile One and looked over and said, 'Great restaurant – love those burgers.' We get good feedback on TripAdvisor and in different ways," says Jones.

There's no such thing as bad press, even if it originates from a urinal in a men's washroom halfway across the country.