Food and the perfect tool: Animal-powered 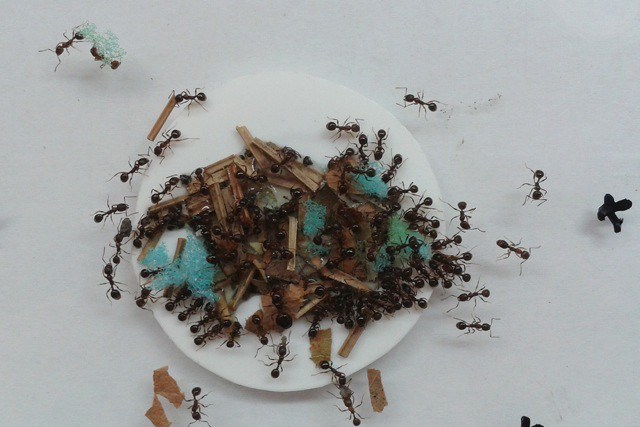 THE RIGHT TOOL FOR THE JOB Ants in an experiment at the University of Szeged in Hungary had definite preferences regarding which tool was best for a liquid lunch. Photo by Gábor Lőrinczi

Phineas Taylor Barnum will be rolling over in his grave about now. After 146 years, The Greatest Show on Earth — the Ringling Brothers and Barnum & Bailey Circus — will be folding up the big top one last time this spring.

Zoos are also going extinct — some for good reason, some not. And before all you animal activists take touch-screen in hand (notice I didn't say "pen"), let me just say that people with expertise far beyond mine can see, in addition to the shortcomings of zoos and circuses, the plus-side of how these venues connect people with animals, real animals, animals they might not otherwise experience, in real, analogue time.

Ideally, even as there are more and evermore of us humans, we'll still get to know and appreciate the amazing animals we share this planet with. So given the recent news of disappearing zoos and circuses, I was doubly excited to read about something delightful to do with ants. Sure, they don't have the gravitas of, say, elephants or lions, but E. O. Wilson would be the first to tell you that ants are pretty amazing.

A recent issue of New Scientist describes how a research team at Hungary's University of Szeged gave two kinds of ants, Aphaenogaster subterranea and A. senilis, access to a variety of tools — natural ones like soil grains and pine needles along with artificial ones — that they could use to transport two kinds of sustenance back to their nests: pure honey and diluted honey.

"The ants experimented with the tools and eventually showed preference for certain tools, even unfamiliar ones. The ants would drop the tool into the liquid and then carry it to the workers back in the nest to drink from," writes Kata Karáth.

The results were remarkable. The Subterranea ants preferred using the small bits of soil to transfer the diluted honey and sponge for pure honey, even tearing the sponge into smaller pieces, "presumably for better handling." After trying all the tools equally, the Senilis ants preferred using pieces of paper and sponge to carry the honey.

Of course, ants aren't the only creatures to use tools to better feed themselves.

In Up Close: Jane Goodall, author Sudipta Bardhan-Quallen describes how Goodall and her first husband, wildlife photographer Hugo van Lawick, observed older Egyptian vultures in Tanzania's Ngorongoro Crater picking up small stones with their beaks and throwing them against ostrich eggs to break them and eat the contents. Young birds simply pecked at the huge shells, which can be up to 3.5 millimetres thick and tough enough to withstand carving by humans.

Young vultures, they concluded, had to learn the technique from the more experienced birds. The observation made it into a 1968 issue of National Geographic. Eight years earlier, Goodall had watched chimps take small twigs, strip off the leaves and use them to swish termites out of their nests and into their mouths.

Sea otters, including those along B.C.'s coast, are known for using rocks to open shellfish. They swim on their backs while balancing fair-sized stones on their chests. The stones act as a mini-butcher's block as the otters take shellfish like clams and mussels in their paws, and skillfully pound them on the rock to get at the tasty bits inside. Otters can even look like a floating smorgasbord, with photographers and videographers capturing images of them floating around with sea urchins balanced on their chests while they lazily munch on another one.

The Internet is also loaded with impressive images of the famous woodpecker finches in the Galapagos Islands. Nicknamed carpenter finches, these amazing birds use tools — twigs or long, thin, needle-like spines from cactus — for about half of their foraging time to dig out grubs and insects. Sometimes the twigs are as long as the birds themselves. The tools are used over and over, with the finches sometimes shortening them to make them more useful in certain applications.

Most people in Sea to Sky country have witnessed crows dropping shellfish on hard surfaces like roads or walkways and driveways to open shellfish. In my books, that counts as taking advantage of a tool to get something good to eat. New Caledonian crows have taken that one step further, mimicking their finch relatives in Galapagos. Scientists have observed them poking twigs into tiny nooks and crannies to get at a grub. The grub gets agitated and bites the twig; the crow pops out the end of the twig, and it's down the hatch.

Science Magazine reports that in an experiment at the University of Oxford, a female New Caledonian crow bent a piece of wire into a hook and used it to lift a little bucket containing food from a vertical pipe. In fact, the female crow made hooks in nine out of 10 valid trials, sometimes changing the angle in the bend of the hook. The crow had seen wire hooks in the past, but had never seen the act of bending one.

And these are just a few examples of animal-powered ingenuity when it comes to food. So much for "Man the Tool Maker."

But tool makers we are and safe to say that all of us, when hungry enough for a good thing, will go to all ends to find the right tool to get what we want. Next week: people-powered innovation and some of the amazing tools we humans have created to enhance our eating experiences.

Glenda Bartosh is an award-winning journalist whose old dog would definitely choose the type of snack she preferred.