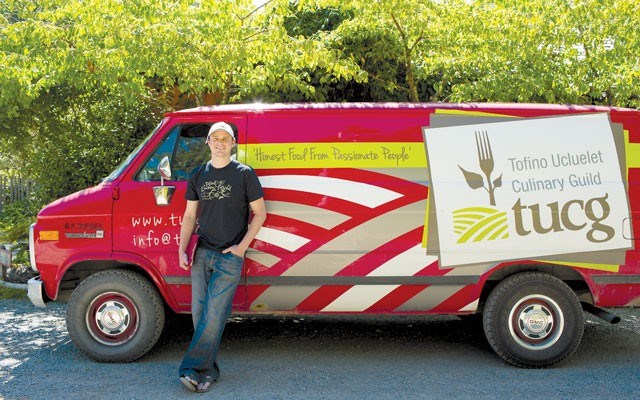 We all need it; we all eat it. Food, food, food — it's everywhere so what better place to start innovating in the name of better, brighter things for ourselves and our fellow lifeforms?

It's only the second year that the Centre for Sustainability has hosted the Social Venture Challenge to encourage innovators in the corridor who are interested in "doing good through business." (See more, page 14). But already food is big a part of it.

"Food seems to be a natural fit because everybody eats and drinks and there are lots of opportunities for innovation in our food system," says Cheeying Ho, executive director for the centre.

"It's a significant part of our ecological footprint, so buying and consuming all that food more sustainably can play a significant role in reducing our footprint."

Last year's inaugural challenge featured speakers from East Van Roasters, Gastown's popular social enterprise known for all the points that count in a good social enterprise. They hire marginalized woman living in the Downtown Eastside and sell products, in this case chocolate and coffee, that are ethically sourced and meet the highest taste tests.

Also, half of the challenge entrants last year were food-based businesses, including the winner, Freed Food Society, which "rescues" perfectly good food unsuitable for sale from the supply chain and transforms it into delicious jams and sauces. (See Freed Food, Aug. 6, 2015.)

Two of this year's venture challenge speakers — Bobby Lax from the Tofino Ucluelet Culinary Guild and Dion Whyte from Persephone Brewing — represent equally compelling innovators in the food 'n' drink sector. Here's a starter of what they're about.

By the way, the venture challenge winner gets a tasty $5,000 in seed money.

IF IT'S HARD TO GET TO THE FARM, BRING THE FARM TO YOU

Everybody knows how beautiful and wild Tofino and Ucluelet are on Vancouver Island's west coast. But the very remoteness that defines them — the main access is a narrow, winding 128-kilometre road from Port Alberni — also makes for challenges when sourcing fresh, local food products, whether you're a resident simply wanting good food on your plate or a restaurant owner after top, local ingredients.

In fact, it was a group of the latter who started the Tofino Ucluelet Culinary Guild six years ago to solve the logistical supply problem. For instance, it costs, say, $40–60 to ship 100 pounds of organic potatoes to Tofino, but only $70–100 to ship a pallet of 2,000 pounds.

"We had a lot of challenges in our community with food security and just general access to quality, affordable food," says Lax, the community food coordinator who's worked at the guild since it started. "Also, our island struggles to support small producers. This (guild) — in one fell swoop — has been able to satisfy both those challenges we have on Vancouver Island."

Enter the power of group purchasing and a single cube van that picks up the food products near the sources, then makes the deliveries. While it was restaurant owners who started the not-for-profit guild, members also now include residents; other businesses supporters and, of course, the farmers and other suppliers.

The selection is extensive — everything from fresh shallots or specialty pork from Cowichan Valley farmers to wild, sustainably foraged foods like bull kelp and sea asparagus.

Bobby sees this unique model — where sales have grown tenfold to about $700,000 annually — as something that could suit the corridor.

"I do think it would work in a place like Whistler or Lake Louise — they're isolated but there's a group of quality restaurants using a good product."

Be THE CHANGE YOU WISH TO SEE

A popular expression is attributed to Gandhi (although he didn't say it): "Be the change you wish to see in the world."

In a nutshell, that's the bottom line for B Corps, for-profit companies certified to certain standards as being "a force for good." That includes B.C.'s first B Corp brewery, Persephone Brewing Company, which will also be featured at the Social Venture Challenge.

Only two years old, Persephone, with its 11-acre hop farm and microbrewery near Gibsons, is already a hit. They've grown from offering only two draft beers in two dozen outlets in the Sunshine Coast and Gastown to brewing more than 30 types of bottled and canned beer (only eight are available at one time) with 20 employees for some 350 accounts.

They also score big time on their B Corp report card, which measures values like environmental and community impact and standards for governance and workers. Persephone, named for the goddess of spring and the CBC's Beachcombers' famous boat, scores more than double the median score.

Besides taking good care of the land on the hop farm, Persephone shines as a social venture benefitting the community. The company is partly owned by the Sunshine Coast Association for Community Living (SCACL), a non-profit organization providing services for people with developmental disabilities. A number of Persephone's employees are from SCACL.

Dion Whyte, Persephone's general manager, says that while environmental and social factors are equally important when you're working for change, the social part of the equation is more challenging.

"What I would hope is that other businesses are looking for creative ways to be engaged with the community and their employees to come up with more innovative solutions to the business challenges we're all facing," he says.

And that's something businesses will learn at the venture challenge.

Remember: The United Nations Environment Programme says that roughly one third of all food produced worldwide for people is lost or wasted annually — 1.3 billion tonnes.

Glenda Bartosh is an award-winning journalist who respects the power of food.