Fork in the road: Here’s to dada—and Dada! 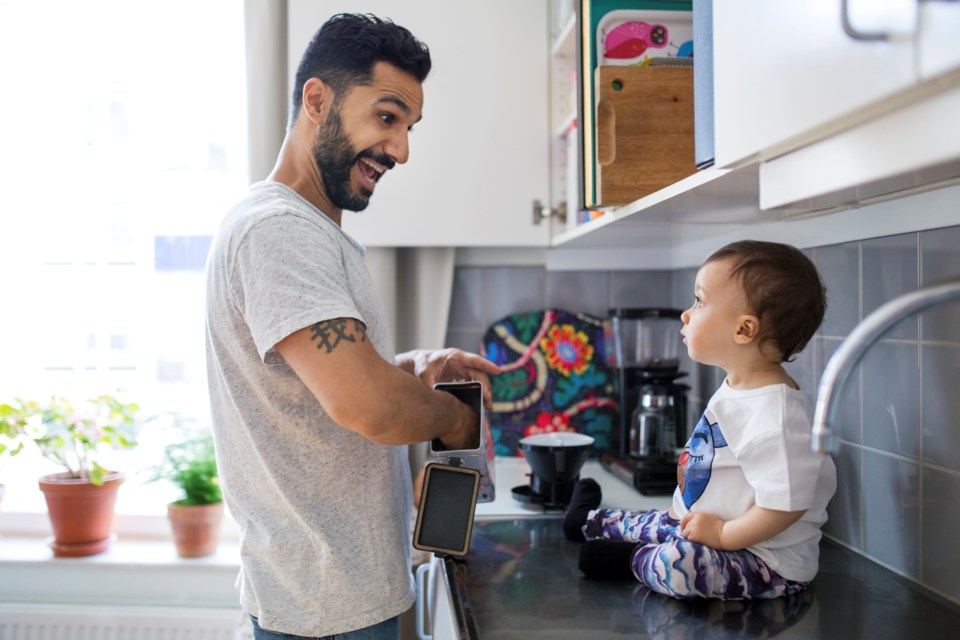 Rare is the male bird in hetero households who does most, let alone all, of the meal prep. Photo by MASKOT/gettyimages.ca

“For you, Dada!” proclaimed the sassy subject line in a push email from that Vancouver bastion of classic modernism, Design House.

What followed was for dad, indeed. A selection of gift ideas for Father’s Day just around the corner (June 20 for all you laggards who might have forgotten)—everything from geometric wood coasters M. C. Escher could have designed to sleek cocktail shakers and electric kettles that wouldn’t be out of place at this year’s Biennale of Architecture in Venice, a concept for your wish list of post-lockdown destinations.

There’s dada, as in “dad,” but what some might have missed is that “Dada” with a cap “D” refers to the international movement in art, film and literature started in 1916 by Tristan Tzara and a gang of fellow artists in Zurich. Marcel Duchamp, Man Ray, Hannah Höch, André Breton—all anti-establishment, to use a good old hippie term, and all Dadaists. With satire and nonsense the bywords, and ready-made and collage the preferred techniques, Dadaism thumbed its nose at convention in reaction to the horrors of the First World War—if a war like that was the best civil society could do, then screw it.

Something I didn’t miss was that there wasn’t a single kitchen-y item in the gift list and, yes, Design House does carry them: Beautifully designed examples of kitchen-tool modernism at its finest.

There’s Philippe Starck’s cool—but nonfunctional—Juicy Salif lemon squeezer looking like a 1930s UFO with its landing gear down. (He was actually eating calamari and thinking of a squid when he designed it.)

And the Todo stylish but practical cheese grater—kind of a mash-up between the Torres Kio, Madrid’s famous leaning towers, and San Francisco’s pointy Transamerica Pyramid or the Shard in London. Todo was created by Richard Sapper, one of the top industrial designers of his time. He died in 2015, but is still hailed as much for his designs like “flexible skin” Fiats (reduces impact in collisions) and transportation planning as for his sleek Sapper office chair. And his cheese graters.

Todo, Juicy Salif—both are real tools for real people who work in the kitchen. And neither made it on the “gifts for dada” list. Don’t wonder why.

Men have long been furloughed from the kitchen.

“I’m not a cook, I’m a lover!” my dad would say, grinning impishly in anticipation of the inevitable whooping and laughter. Long before us kids were even kids, he delivered his trademark excuse every time someone said something like, “Hey, Paul, why don’t you cook dinner and give Joyce a break?”

I’ve written about this before but it’s worth repeating: At one point my mom actually calculated how many meals she’d planned, prepped and laid on the table in all their years of marriage up till then. Even allowing for the pots of porridge dad made, the odd egg he would poach, and the dinners out or time spent in the hospital having us kids, it totalled more than 45,000 meals! That’s a lot of time cooking.

The difference in gender roles in the kitchen and otherwise is a recurrent theme in Alice Munro’s beautifully astute short stories. I just revisited one of her collections for “Carried Away,” first published in The New Yorker 30 years ago. CBC Radio’s “Ideas” twigged me onto it for its relevance today as the characters therein get “carried away” by various circumstances beyond their control—the First World War; the great flu epidemic of 1918 (which was not Spanish in origin and swept the world just after Dadaism got started); and more local logistics, like jobs. We’ve endured our own “carrying away” this past year.

There’s a great line in another Munro story in the collection, 1978’s “Royal Beatings.” Daughter Rose and step-mom Flo are squabbling in the kitchen while Flo’s literally on her knees, working. Brother Brian flees the scene, to do as he likes. “Being a boy, free to help, or not, involve himself or not.” That would be my dad. Sure, he would help out in the kitchen, but there was always the aura of “or not” in the air.

Grandad, on the other hand, did like to cook and make things, albeit within certain limits: Gorgeous Christmas cakes; Sunday hotcakes spiced with ginger (his own touch); crabapple and currant jellies bright as jewels. He was also The Chef on prairie hunting and fishing trips where the rule was, complain about the cooking—you cook. This led to the line, “Boy, this sure is salty (or burnt, or whatever)—just the way I like it.”

Once home, he’d gut and clean the fish or game, but nan would cook it. These genderized roles stood until after he retired and nan’s arthritis was so bad there was no choice.

Sure, lots of men, dads and otherwise, can be found—happy as clams—in kitchens today. But anecdotal evidence says more often than not they, too, mostly have specialties like grandad—baking bread, a favourite pasta dish. Rare is the male bird in hetero households who does most, let alone all, of the meal prep.

ScienceDirect concurs. Although more and more men have taken on domestic chores, including meals, compared to my dad’s generation or even when “Royal Beatings” came out, they still don’t do half. Lots of variables play in, including education, income and our new stay-at-home parameters, but ScienceDirect’s analysis of data from a 142-country poll shows that dinner is cooked more frequently than lunch, and women cook both more often than men. So Dada that.

Meanwhile, even if your dad’s a model cook, whip him up something special for Father’s Day. Everybody likes to be waited on, at least once in a while.

Glenda Bartosh is an award-winning journalist who figures we could use a post-Dada revival today.