FORK IN THE ROAD: Let them eat cake 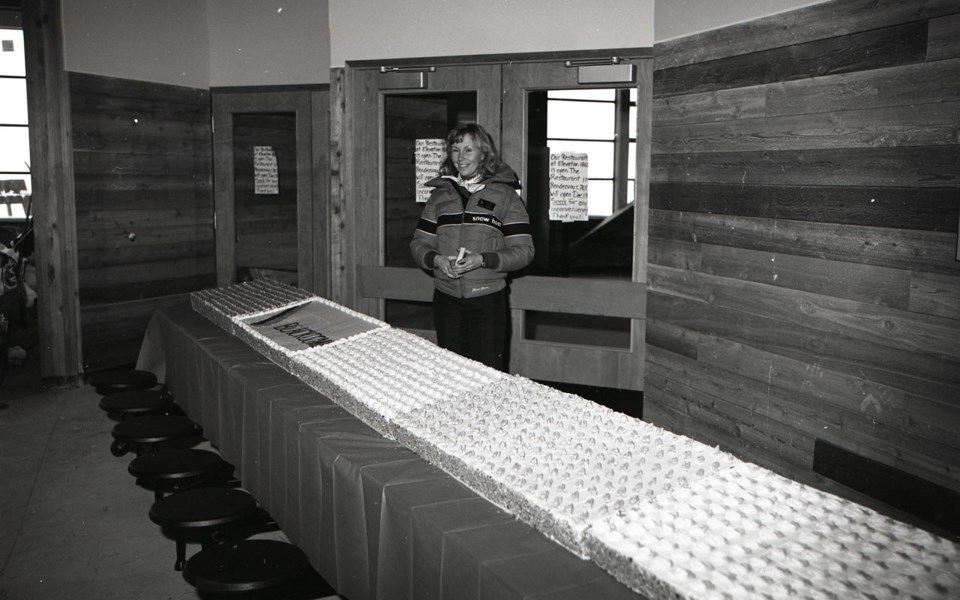 Timeless snow host Debbie Smythe would agree it seemed like a mile-long cake if you were lucky enough to get a taste of it at Blackcomb Mountain’s opening 40 years ago. Courtesy Whistler Museum, Greg Griffith Collection

It’s tough when writing a fortnightly column to stake out the right turf in any obvious, upcoming news event—as in, will the 25,000 National Guards in Washington D.C. have little or lots to do on Jan. 20? (I hesitate to use the British “fortnightly” but we know with certainty, something we could all do with a bit more of right now, that it means every two weeks whereas “biweekly” means both twice a week and once every two weeks—naughty and confusing English language that it is.) But one thing we know for sure any time beforehand: One side or the other will be celebrating.

Personally, if I’d been part of the planning team for this monumental event, I would have been on the side saying, Joe, come on, let’s just have a little indoor inaugural thingie on the 20th. We can still have cake.

But I know my place. And cake knows its place, too.

Imagine moving through life knowing that. Delicious, celebratory, elevating, especially when it rises properly. And, bonus, cake is always and absolutely good for you. Especially during a pandemic and a news cycle so full and fraught that only the word “historic” might temper it a bit.

Need a lift? Have a slice of cake. The bigger the better. (See above.)

Chocolate cake, coffee cake, sponge cake, flourless cake (yum). Whatever you choose, you know you’ll come out a winner, as all kinds of people have been doing for centuries.

Cakes literally are quite ancient. “Cake"—which harkens back to 13th century Middle English—originally meant a baked mass of bread or similar substance vs. the usual loaf. It comes from the Viking/Icelandic/Swedish "kaka.” Scottish and Welsh cakes of the day were “thin, hard-baked brittle species of oaten-bread.” It was the English who made them sweeter, although ancient Greeks knew honey cakes.

Speaking of which, my ancient cake experience was a slice of wondrous orange honey cake at the Fête de la Véraison (grape-ripening festival) we literally stumbled on in Châteauneuf du Pape. The vendor, ironically, an Englishman at a French wine festival, had the recipe all written out. It was from the 15th century, the recipe, not the cake, although it may well have been, too, given how dense and fantastical it was.

Cake, from a scientific point of view and otherwise, is a most interesting substance.

“The essence of most cakes is sweetness and richness. A cake is a web of flour, eggs, sugar and butter (or shortening),” writes Harold McGee in On Food and Cooking, “a delicate structure that readily disintegrates in the mouth and fills it with easeful flavour.”

Ease us on, oh mighty cakes.

Traditional cakes, notes McGee, weren’t nearly as sweet as cakes today. Think English pound cake and French quatre quarts, or four quarters, made with equal weights of the four main ingredients: flour, eggs, butter and sugar. Pound cakes were so-named for the pound each of butter, flour and sugar and the dozen eggs beaten in by hand for hours.

If you don’t feel like all that work, and getting a wrestler’s arms, you can’t go wrong getting your cake fix from any of the Purebread bakeries in Whistler and Vancouver. Shop in person for slices or, for whole cakes, go to the online bakery at Purebread.ca.

Even the photos will make you drool. But Purebread’s Barbara Murawska—who ended up being a baker after coming to Whistler from Poland for one winter four years ago when her boyfriend got a job as a ski instructor—has a definite favourite: The salted caramel one made with chocolate sponge cake.

“To be honest it’s quite sweet,” she says. “But I like sweet things. That’s why I’m working here, I guess!”

Whatever form they take, cakes are the icons of celebrations. Just ask my mom, who celebrated her 93rd last week at an outdoor picnic with a towering cake. Or any of the lucky ones on hand for the g-i-n-o-r-m-o-u-s runway of a cake that Ted Nebbeling and Jan Holmberg—the boys at Gourmet Bakery, the go-to… well, the only bakery at Whistler in the 1980s—whipped up to celebrate Blackcomb Mountain’s opening 40 years ago.

I was still in journalism school so I didn’t get a slice of that cake. But I did of the one as big as a carport that Vancouver Mayor Mike Harcourt served up in Stanley Park in 1986 in honour of the city’s 100th birthday and Expo ’86.

More recently, we may well have heard a chandelier-rattling “let them eat cake!” thundering out from the golden bowels of Trump Tower or Mar-a-Lago Resort once-upon-a-yesterday had Trump ever seriously contemplated any meaningful financial assistance for America’s people either before or during the pandemic—had he ever been literate enough to know such a reference even exists. My eyes grow wide imagining all the fiction that’s going to roll out of this vain, insane, dangerous presidency. (BTW it was Shannon Cake at WPTV News who introduced a segment showing the Trumps’ moving vans arriving in Palm Beach on Monday.)

We should not, however, lay the original cake-eating suggestion for starving peasants at the feet of Marie Antoinette. Historical records only reveal it was spoken by a princess or someone of that ilk, and the original noun was “brioche” meaning a light, sweet bread—not “gateau” or “cake.”

And, no, since most all inaugural celebrations this year are virtual, it doesn’t look like they’ll be serving a posh cake. But note that Trump’s singular event featured a nine-tier creation that looked startlingly identical to the cake served at President Obama’s inauguration.

At the 2017 Commander in Chief party, Vice President Mike Pence cut into it with a sword. Hope he hung on to that thing. He may need it yet.

Glenda Bartosh is an award-winning journalist who’s happy to learn that you can also use “fortnightly” as a noun to describe magazines or similar publications issued every two weeks.