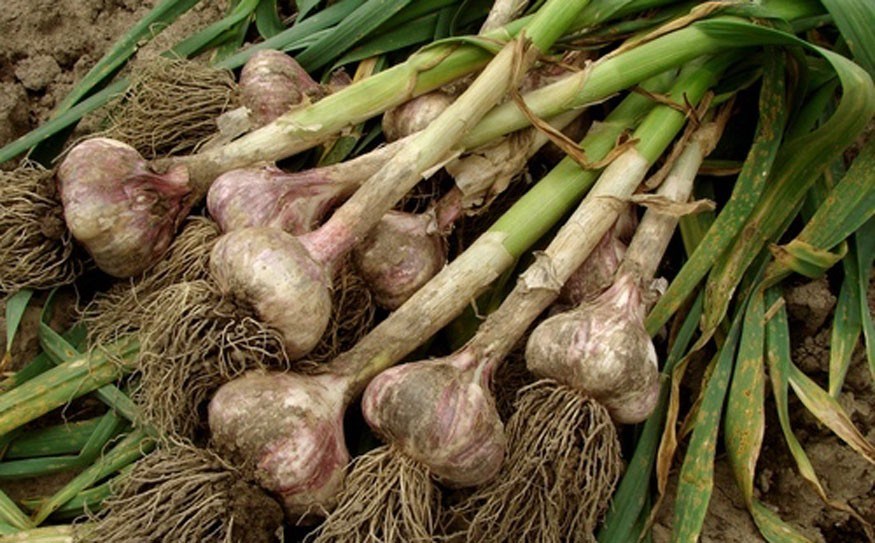 Garlic is the rock star of the vegetable garden and its biggest fans go to great length to acknowledge the bad breath producer.

This onion species is celebrated around the globe with annual festivals held in places like Toronto, Sudbury, Stratford, Perth and Carp in the garlic-crazed province of Ontario along with events closer to home in Birken, New Denver, Lac La Hache, Pender Harbour and Chilliwack.

According to VirtualTourist.com, the world's best garlic festival is found at Gilroy, California. Number two on the list is L'aglio di Voghiera; Voghiera in Ferrara, Italy while the festival in Perth, ON is rated the fifth best in the world. The ninth best is said to be the Hills Garlic Festival in New Denver. Planning is already underway for the 20th anniversary of the festival on Sept. 8, 2013. The Elephant Garlic Festival in North Plains, Oregon, rounds out the top ten list.

The list of international garlic destinations singled out by VirtualTourist.com also includes Saugerties in New York State, the annual fest on the Isle of Wight, Arleux in France, Takpr in Turkey and Bennington in the state of Vermont.

Mike Roger is the organizer of the garlic fest in Birken. He's calling all his garlic friends together to celebrate the harvest and focus on garlic for a night.

Roger is a straight shooter who calls it as he sees it and while the garlic is headlining the festival he isn't hiding the fact that the festival isn't entirely about the onion species rumoured to have supernatural powers over the undead.

"They're basically just an excuse for a party," says Roger in a candid interview from Willowcraft Farm at Poole Creek.

He says the last time he hosted a garlic festival was in 2010.

Roger operates a small-scale hobby farm when he isn't running a snow cat for Whistler Blackcomb, a seasonal job he has been doing for the last 20 years.

He grows a number of items in his garden but his focus is on garlic and he sees his area as a potential hot zone for garlic.

"A lot of people are getting into it," he says. "There's a lot of success in it.

"People get that garlic fever like they get mushroom fever in the fall, you know."

Roger doesn't recall when he put on the first garlic festival but he knows they got better with each one he hosted.

The festival has traditionally been held in August.

"This year the phone just kept ringing," explains Roger. "'When's the garlic festival?' I thought I better do something quick here, so we're doing it on the equinox."

Garlic lovers enjoy the tasty bulb for its medicinal qualities, its decorative uses and Roger suggests that it goes well in almost any dish.

"Its an ultimate food," according to Roger. "It keeps very well over the wintertime so you can enjoy the energy of the earth the whole winter."

Garlic has also been associated with much folklore through the ages.

Egyptian slaves were reportedly fed garlic because it was believed to ward off illness and to increase strength and endurance. Koreans used to eat pickled garlic before travelling through mountain passes to ward off tigers. In some cultures garlic is regarded as an aphrodisiac and promoted as a food that increases semen. Many cultures insist garlic wards off evil spirits. The medical world through time has used garlic as an antibacterial and to treat high cholesterol, colds, flu, coughs, bronchitis, fever, meningitis, ringworm, intestinal worms, hypertension, infections and snakebites. Garlic is currently used for reducing cholesterol levels and cardiovascular risk.

Along with being used for fending off evil spirits the relative of the onion has been successfully used to ward off slugs, mosquitoes and other insects.

The cultivation of garlic goes back more than 5,000 years and it is supposedly one of the first things humans farmed in the Euphrates and Nile Valleys. From Egypt to China this vegetable is a huge hit. Vitality Magazine reports that half the garlic produced in the world is consumed in China.

This is certainly a crop worth celebrating and Roger is leading the way with the event planned for Saturday, Sept. 22 from 3 p.m. until midnight at his farm. Camping is available for those who want to stay overnight. Two bands have been booked. Walk On Dead are travelling from Bowen Island and Mike Vollmer's Braunvoltage will also entertain the gathered garlic lovers. The festival is a potluck event and Roger promises to provide the roasted garlic.