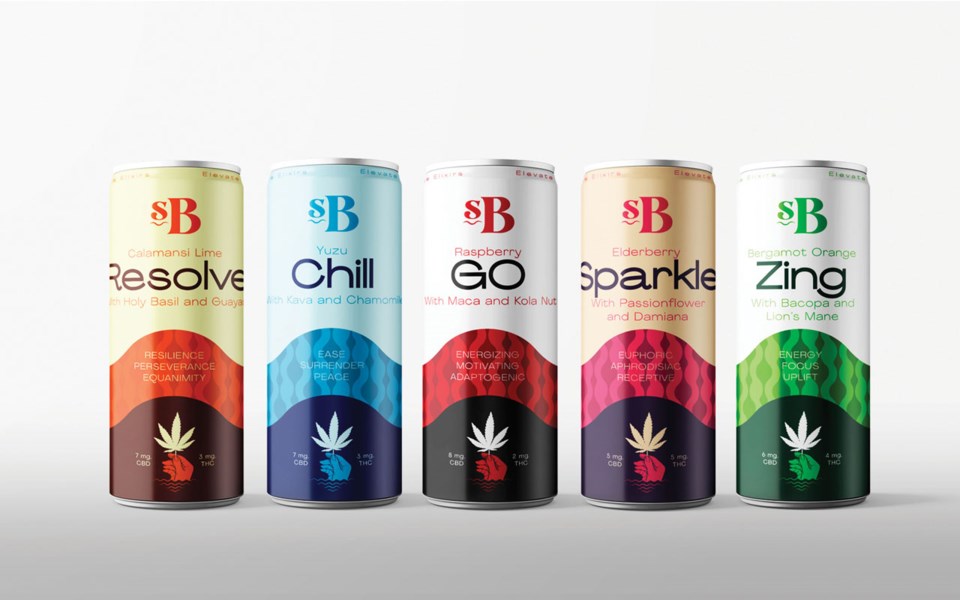 As the founder of Squamish’s Gillespie’s Fine Spirits, Kelly Ann Woods made her mark in the craft alcoholic beverage realm and looks to apply that knowledge through her new craft cannabis venture, State B Beverage Company.

“To be in a nascent industry is beyond my wildest dreams. To take my knowledge of beverage and apply it to this burgeoning industry is wildly exciting,” she said. “It’s a big operation that I’m hoping brings so much joy and wellness to people.”

Woods hopes to launch the line by November, though as late as January 2021 is a possibility, with five options. All will have low-dose cannabidiol (CBD) and tetrahydrocannabinol (THC), with each having different supportive botanicals to help create a specific effect. For example, one option, dubbed Sparkle, includes euphoric aphrodisiacs, passionflower and, compared to the others, higher levels of CBD and lower levels of THC. The onset of effects, she said, is between five and 15 minutes.

Rather than recycling any existing flavours offered by Gillespie’s or her non-alcoholic Boozewitch brand, Woods has embraced the opportunity to experiment with new profiles.

Woods, who described herself as a “bona fide witch,” said she concocted formulas with a master herbalist to create “different states of consciousness,” and, as a result, new tastes.

“It’s going to be a whole new set of profiles because it’s a completely different product. Ours is a bit revolutionary,” she said.

The beverages will be flash-pasteurized with botanicals, fruit concentrate and, of course, cannabis. Flavourings include tangerine, raspberry, mandarin, hibiscus and marionberry, which she described as a “more complex” blackberry.

“It’s got a little effervescence to it,” she said, saying while it’s a different flavour experience, it most closely parallels yerba mate or tea-and-fruit blends such as blackcurrant or hibiscus. “Think about combining lightly sparkling water with herbs, with cannabis, with fruit concentrate.”

The product development process was complicated by the onset of the COVID-19 pandemic, as Woods had been looking at exotic flavouring options such as callamansi, acai and bergamot, but subsequently pivoted to using ingredients that could be sourced closer to home.

“One of the things that COVID has taught me is that supply chains are fragile and that to localize everything as much as possible is crucial moving forward,” she said.

Another realization Woods made during the pandemic is that, with cannabis sales deemed an essential service, it appears to be a “recession-proof” industry, with sales rising in all sectors except topicals. However, with consumers cognizant of respiratory health, consumables seem to be a reasonable way in.

For those who want to try the new flavours and enjoy the botanicals without the high, Woods expects to have a version without cannabis canned next month. Woods credited herbalist Vanessa Prescott for playing a major role in ensuring that the beverages will still be of high quality even without cannabis.

“They’re going to have the same botanicals,” she said. “Vanessa really honed in the formulations. I wanted to make sure that they were of the utmost integrity.

“She helped me make sure that they would be the best possible herbal combinations.”

Woods also expressed support for racial justice, including the Black Lives Matter movement, and is in the midst of making an arrangement to provide a share of State B’s profits to an Indigenous legal defence fund, though details were still being hammered out at press time.

She’s cognizant of her entry into the cannabis industry as a white woman, considering that non-white people felt disproportionate legal consequences prior to legalization, while white entrepreneurs have taken the post-legalization lead. Prescott, she noted, is Métis.

Woods explained that, in place of a mission or vision statement, State B produced an “ethos document” to outline company culture, highlighting kindness and including a land acknowledgement.

“It’s about our company process, procedures, and what’s important to us,” she said. “It’s less about our goals and more about, day to day, how we move forward.

“That is a really important question, now that all of a sudden there are all these people that are going to go out and make a ton of money on the cannabis industry when there are people sitting in jail and whose lives have been dramatically affected by it.”