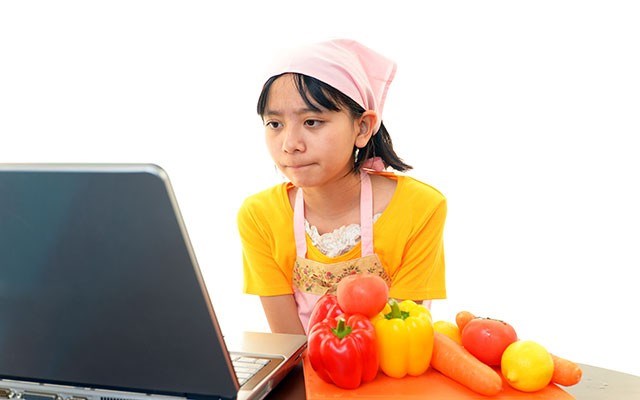 Is Google replacing mom (or dad) when it comes to cooking and other "home" advice?

The question struck me the other day while I was watching a young couple grocery shop. I think they were past their teens, but since half the young people driving today look like they're 12 to me, I can never tell for sure.

Regardless, they reminded me of myself when I left home and was out on my own for the first time figuring out how to make decent food; how to clean the floors; how to get rust stains out of a favourite shirt after I hung it on an old nail.

After leaving home at age 19, my first go at making spaghetti sauce was a disaster. My girlfriend and I opened two tins of Heinz tomato sauce and added maybe a teaspoon of minced onion and a pinch of oregano — it was Italian food so you needed oregano, right? We finished it off with salt and pepper and heated it until it was warm. Uck.

I asked my mom, who is a fabulous cook, for her spaghetti recipe soon thereafter.

I still ask mom for recipes and advice, like when I accidentally dump too much salt into something. But with the advent of the Internet I, like millions of others, have a new go-to advisor.

So are the days of asking mom kaput?

Given I'm old and the young ones are, well, different, I asked a few of my younger pals if cooks today rely on Google for domestic advice, or do they still consult mom — or dad — too?

Here's what they had to say:

Sometimes it's useless asking your mom for a recipe because she just doesn't have what you're looking for.

So points out my old pal, Kevin Griffin, who isn't exactly a novice cook but he's definitely younger than me and uses Google lots for advice. A long-time reporter at the Vancouver Sun, Kevin also worked for years at the Whistler Question.

"You can find incredible recipes online," he says. "I found one for a raw carrot salad that I made, and everyone loved at a recent pot luck."

In this case he'd just bought some really carrot-y orange and yellow and deep, deep purple carrots at the farmers' market. Since he really likes them raw, and considers carrots generally under-rated and overlooked, he Googled "raw carrot salad" and came up with lots of hits, including this one, http://bit.ly/1iKLNFa — an old French recipe for carrot salad that includes Dijon mustard and lots of fresh parsley.

"I read the description and it sounded simple and potentially very tasty. It was both," Kevin says.

"I've served it at a family gathering and at a potluck with lots of 'mmms' both times. My mom — bless her heart — is an OK cook. My dad was better. She made a cabbage coleslaw but not a raw carrot salad like this.

"For me, Google is my new culinary parent. Welcome to the future."

WHEN DINNER IS A BIG MAC

Marika Richoz reminded me of this when I dialed her up. Now a self-taught professional cook who runs a successful underground restaurant, Marika is the daughter of long-time Whistlerites, Joan and Marcel Richoz.

She uses Google a lot now, especially for things like measurement conversions, but when she left home in 1993 at age 18 the Internet was only a glimmer of its future self. So she'd seek advice from her mom, who is an exceptional cook, or consult with her girlfriends on culinary mysteries.

"Definitely for the first little bit when you are on your own you'd get frozen yogurt and eat all the junk you couldn't eat when you're at home," she says. "But I remember asking girlfriends as we started cooking. We'd go out for dinner and have a dish — a really good pesto pasta, I remember making that in particular — and then try to recreate it. We'd look in cookbooks and ask our mothers, too."

These days Marika doesn't go to her mom for a particular recipe. More, it's what Joan's eaten lately and liked, or what's in a dish Marika remembers from her youth. Then she'll springboard off of that to create something unique.

So what do the young people she knows consult? "I would say it's mostly blogs and Pinterest — there's a lot of food stuff there," she says.

"A lot of moms in my generation didn't cook or it was very minimal, sadly," she says. "It was a lot of eating out — fast food and pizza, or frozen foods from Costco, so they didn't really have that inspiration," says Marika.

Leaving those young ones to Google or grandma.

Google can save your bacon — and more — in unimaginable ways.

This is my take-away from Keely O'Brien, an interdisciplinary artist currently finishing her Bachelor of Fine Arts at Simon Fraser University. She's also the daughter of one of my oldest friends and a new home maker (I use that in the literal sense, that is, making a home for oneself, not the old-fashioned one, meaning a doting mother and wife).

"This is a really interesting question," she says. "I'd say day to day I do refer to Google more than my parents for household tips and general info."

Growing up with handy parents and an extremely good cook for a mom has given Keely confidence in her own skills and knowledge, which she relies on more than the Internet. "So in a way, by calling on my own common sense or experience, I feel like I am calling on knowledge handed down to me by my parents," she says.

But Keely also has a great story proving Google can be way more effective than mom when you least expect it:

"One morning I got up early to bake something. I had the oven on preheat when I suddenly realized it was on fire! Or something inside of it was. The oven was literally full of flames. Both my housemates were asleep, so I went and woke them up. We all ran back into the kitchen and stared at the flaming oven, debating what to do. Call someone? Call 911? Try to put it out ourselves? Then, one of my housemates went and got her laptop, and calmly Googled 'what to do when oven is on fire'. By the time we had scrolled though a couple pages, the fire went out on its own."

So the future is friendly, with Google.

Glenda Bartosh is an award-winning journalist who barely uses her cookbooks.