Rethinking our garbage stream and other people-made systems
Mar 2, 2016 5:00 PM By: Glenda Bartosh 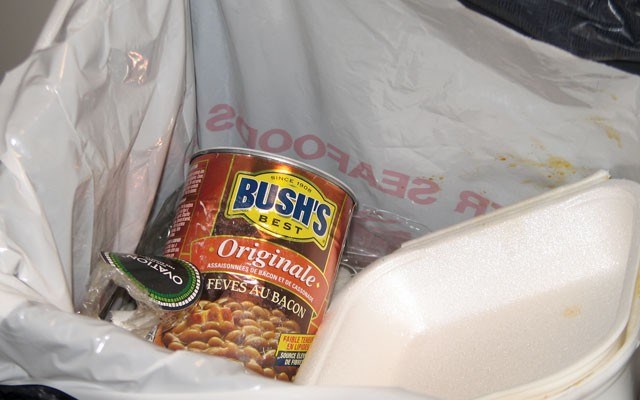 THE NEW CULPRIT An an empty tin can in the garbage stream may be just the ticket. By Glenda Bartosh

I did something terrible this week.

We'd just emptied the bag we use for recyclables — a cool tool from Dyanne Wayland's Zerowaste Products Inc. (Always happy to plug a local innovator, especially a woman.)

She offers well-designed, reusable options for organizing blue bin waste in your house, but it's her black "Shopper" we use for recyclables. This compartmentalized, reusable bag is actually designed for shopping, but we love how it keeps our recyclable waste separate for easy disposal without taking up much room in our condo.

We've added a plastic bag to line the compartment for tins and bottles to contain spills. Since it's exactly the right size, I keep it and wash it every so often. I also think there's a silent prayer of consumer guilt invoked, namely, 'Please, Mr. Bag Factory, don't suck up more resources from our depleted planet to make a single extra bag. I'll wash this one over and over till it shreds.' Which I did that day, given it stunk.

Since all this binning and sorting had made us hungry, I then made lunch — something quick, cheap and tasty with the rich flavour of real baked beans that my mom taught me. (See the "recipe" at the end of this column.)

Now the "Shopper" was empty, awaiting my rinsed bean tin, but the plastic liner bag was still wet. Lord knows what possessed me — I'm normally such a good girl who recycles or leaves the tin on the sink to dry. But that day I just flung it into the garbage can.

Wow — Grandma goes rogue! Did that feel good! It also made me think, 'don't we long for simpler ways, like chucking all our garbage into one bag?'

Maybe it's gravitational waves, or a new zodiacal alignment, but it seems a lot of us are looking for better systems for managing ourselves these days.

The Oscar ceremony this week was ablaze with calls for new systems: Fairer ways to organize the movie industry and the Oscar system itself in the name of diversity. DiCaprio's call to arms on climate change. Lady Gaga's righteous exhortation for new attitudes around sexual assault.

Far from Hollywood, Calgary lawyer Lisa Silver argues for an update to Canada's criminal code to align it with modern values. Even New Scientist is positing we need a new way to think.

The cry for change has as much to do with better science and enlightened attitudes as it does with 7.4 billion of us on the planet — about three times the number when I was kid and we did throw all our garbage into one can. Mind you, there was about one third the garbage.

Given we rely on many core systems that are centuries old (Londoners contemplated a central garbage collection system back in the 1700s; Canada's criminal code is from 1890), it really is high time we come up with better ways to manage ourselves, including our garbage.

Numbers like this are always fraught, but humans produce some 6 billion tonnes of garbage a year. Whistler, some 13,000 tonnes annually. On average, one-third of it is reusable. So, yes, we have to do something besides dumping it.

The $6-billion question in the age of sustainability is, can we do better than the current system?

On one hand, Germany has such a complicated waste sorting system it makes ours look like Tinker Toys. There, glass must be sorted by colour — green, brown, clear. Bins themselves are colour-coded green, blue, yellow, brown, grey. Plastics go into a yellow bin, or a yellow bag. I feel like screaming just reading about it.

Then there's San Francisco with its trash inspectors poking their heads into garbage cans to learn how you do, or don't, sort waste. At one point, they also suggested fining you $1,000 if you didn't get it right.

But never mind Draconia — the answer could be simple. Dump your garbage in one bin, then pay people properly to sort it properly.

This is actually done in some jurisdictions with success. According to the L.A. Times, South Pasadena lets you toss your garbage into one bag, then experts sort it at the destination end, something called "mixed waste processing." In Chicago, you at least get to dump all your recyclables into one bin then they, too, get sorted later.

End of confusion (how many times have I picked milk cartons out of our building's "containers" bin?), and the start, some say, of better waste management, plus jobs.

So let's have lunch and think about it. If it's beans, remember — an empty bean tin was one of the bits of garbage MIT tracked in Seattle with GPS to see where it all ended up.

Glenda Bartosh is an award-winning journalist who likes things fair and simple.

Dump a tin of pork 'n' beans into a pot. Add, maybe, four tablespoons of minced onion, a dollop of molasses, a splash of good vinegar (a small splash), and a pinch of instant coffee if you have it. (Or try a jar of Caf-Lib the next time you're in a European deli. It's a nice coffee substitute from Germany made from roasted malt barley and chicory with zero caffeine and a rich coffee-like flavour.) Slice in some dried chorizo or wieners — as you like — and let it all simmer gently for 10 to 15 minutes. Voilà — another tasty "pulse" meal in a minute. Good served over toast with sliced tomatoes.