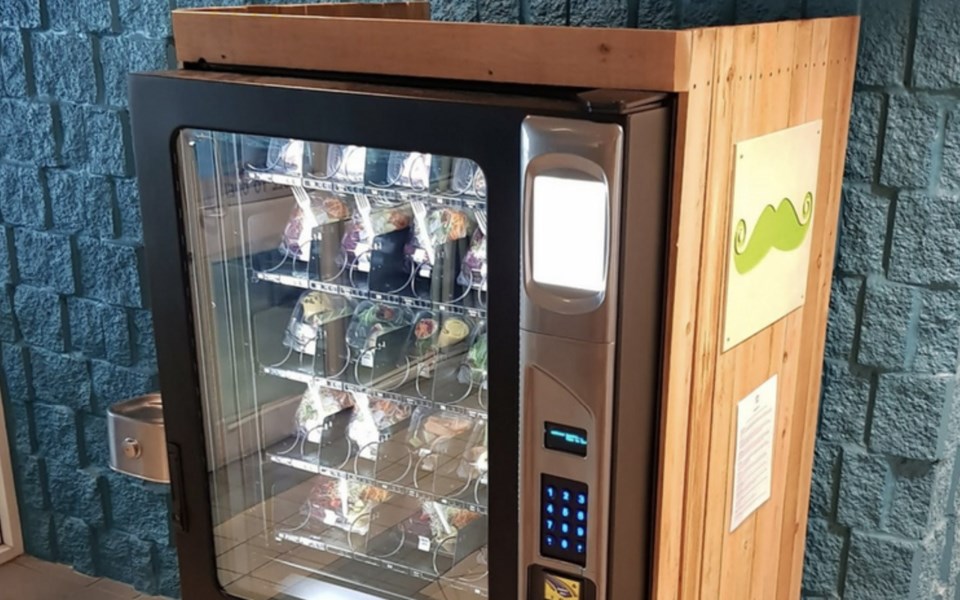 The prevailing mantra at The Green Moustache has always been that food is medicine. Now the vegan food company is putting that philosophy into action through a deal it is finalizing with Vancouver Coastal Health to bring its vegan vending machines to a hospital near you.

The café franchise—which counts two locations in Whistler—has been in talks with the health authority for the better part of two years to open all-organic, plant-based restaurants in a number of B.C. hospitals. While that contract is still in the bidding process, restaurant co-founder Nicolette Richer proposed a pilot project that would introduce Green Moustache vending machines first to Lions Gate Hospital, before rolling out to other hospitals if successful.

"It is honestly a much better option because we can get one up and running in a matter of days and it can technically provide the same volume of food we could provide in the café," Richer explained.

The Green Moustache first launched its vending-machine program last year at the Meadow Park Sports Centre, where it dispenses regular items from the café menu, such as its classic Buddha Bowl, collard wraps, pressed juices and vegan desserts. Unlike a traditional vending machine, the food is made fresh and restocked daily.

"The great thing about our vending machines is they can carry all of the food we serve in our restaurants," Richer said. "Outside of our smoothies, that will be the only thing they can't get out of our vending machines. We're also going to be partnering with other retailers, like Spark Kombucha, to get their bottles in there."

Richer said the deal makes sense particularly for hospital staff that struggle to find nutritious food options at odd hours on the job.

"Normally they can't access food 24-7 in the hospitals. They have to rely on the one or two restaurants that might be open in the community, which often results in gas-station food and things like that," she said. "I have a feeling that it's going to be successful just based on the fact that people will be able to get all of our food, which they can warm up, for example, in their own kitchen."

Ultimately, Richer would like to see Green Moustache vending machines in hospitals, schools and rec centres across the country. She also hopes to shift the common perception of vending machines as solely dispensaries for junk food. But with that shift to plant-based, whole foods, the cost will be higher than the average vending machine, with the menu ranging from $6 to $14, which is still affordable when you consider you're getting the same menu and portions as you would at the café.

"I see, easily, that most other restaurants are charging five or six dollars more per meal for non-organic food, for food that has tons of fillers, like really inexpensive flours, processed sugar, salt, and things like that," Richer noted. "I think people are going to have to get over their perception around food being expensive, because at the end of the day, it's either they pay for it now to get freshly made, organic, delicious, nutrient-dense food, or they are going to pay for it later with their health, because your diet is directly related to your health."

Since opening its first location in Whistler Village in 2013, The Green Moustache has seen significant growth, now counting six locations in B.C. and Alberta—with a seventh slated to open in North Vancouver this summer. This most recent deal will allow the company to "scale our business so quickly because of the fact we don't follow that brick-and-mortar model," Richer said. "In this day and age, it's really challenging because commercial space is very expensive in British Columbia and most parts of Canada, and it takes a lot of time, we've been finding, working with the health authorities to get approvals."

Last year also saw the launch of the Green Moustache's equity crowdfunding campaign on FrontFundr. Through that campaign, Richer said the company attracted two major international investors that would nearly cover the company's entire capital expansion cost. However, with its target met and because FrontFundr is only open to Canadian investors, Richer said the campaign was temporarily shuttered, with plans to relaunch it in the near future.

"We really want Canadians to have the opportunity to invest in our company, and I think this will probably build a stronger case for Canadian investors who might be nervous about investing in a small, private company," Richer said. "Now that they see we have attracted international investors, I think it's going to make it that much more successful." For more information, visit greenmoustache.com.