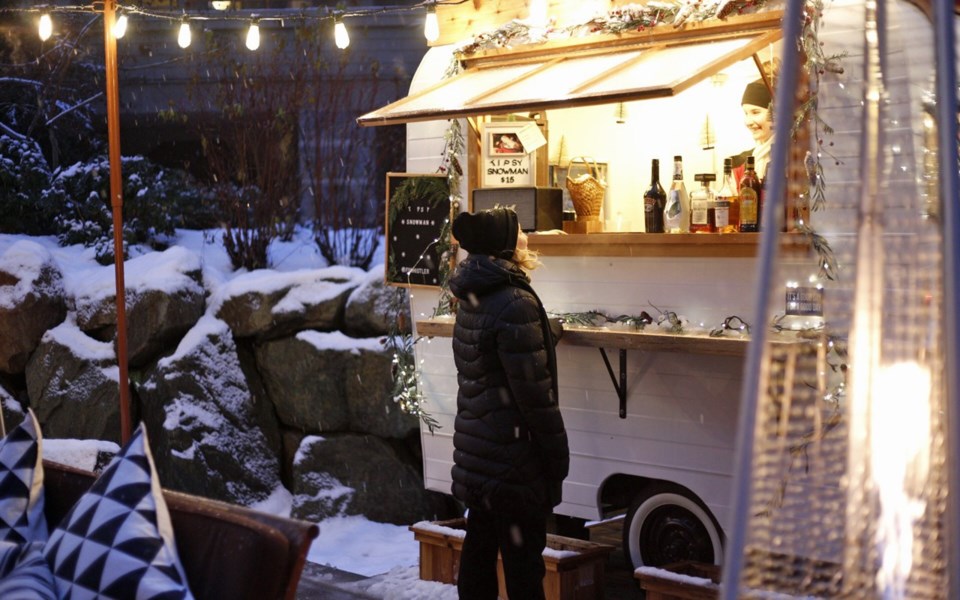 THOSE PATIO CAMPERS The Four Seasons Whistler's Patio Camper is housed in a retrofitted 1960s camper, and serves up spiked hot chocolate and s'mores to guests. Photo submitted

For the average Canadian, the concept of s'mores is pretty straightforward. But for those uninitiated in this most ooey-gooey of camping traditions, s'mores are a novel pleasure that can require some basic instructions.

"I even see it with the media we bring in," said Eleanor Gilkes, PR executive with Four Seasons Whistler. "Our Mexican media, for example, love it. At one point I was put on live TV to show how to make a s'more.

"For us, it's a quintessentially North American thing that we don't have at home."

Giving guests a slice of Canadiana was the main driver behind the Four Seasons' rustic outdoor Patio Camper, a converted 1960s trailer that serves up boozy hot chocolate, topped with a "snowman" fashioned from marshmallows, pretzels and candied corn, as well as the aforementioned s'mores, cooked on an open fire.

Gilkes said the concept emerged from marketing head Chelan Goonetilleke, who noticed the array of campers dotting Whistler's streets on his drives through town. The search kicked off for the perfect trailer, which Goonetilleke found a handful of years ago in Port Moody in a state of disrepair.

"It was completely derelict and they needed to bring it in," Gilkes relayed, adding that it had to be crane-lifted into the hotel's courtyard and completely retrofitted for food service."[Goonetilleke] really thought that it spoke to Whistler. He really wanted to bring a Whistler element into the Four Seasons."

Open daily from 4 to 6 p.m., the Patio Camper will also be home to cheese fondue in the coming weeks. In the summer, the camper shifts focus to refreshing cocktails, like the Aperol slushies that were on offer last year.

Although part of a massive, global chain that counted 45,000 employees worldwide and US$4.3 billion in revenue in 2018, Gilkes said the staff at each hotel is tasked with making their respective property distinct. In Whistler, at least on the culinary side of things, that has meant incorporating employees' passions and backgrounds. In the past handful of years, the Four Seasons has launched a pop-up ramen restaurant that plays on Executive Chef Eren Gruyel's time working in Tokyo, a Sunday brunch buffet that included such delicious novelties as a donut wall and Cantonese dim sum, and an in-house dining program inspired by chefs' memories of home. The hotel has also introduced an Indian platter, called "thali," to its après program, concocted by new chef Sajish Kumar. "Apparently each region of India has their own thali, so [Kumar] wanted to bring the spices and flavours from home but using local ingredients," said Gilkes.

In an industry that prides itself on delivering a consistent experience, it's notable that Four Seasons Whistler has given its staff the creative freedom to innovate on such a regular basis.

"A big thing for us is to be seasonal and always be trying to do something different," Gilkes said. "We're smaller [when compared] to some of the bigger resorts. For us, it needs to be a bit more unique, creative and a bit more niche."