Have 'your treat, your way' at Creekside gelato and smoothie bar, Confetti

Shop is one of several new food and beverage concepts coming to neighbourhood
Dec 27, 2019 6:00 AM By: Brandon Barrett 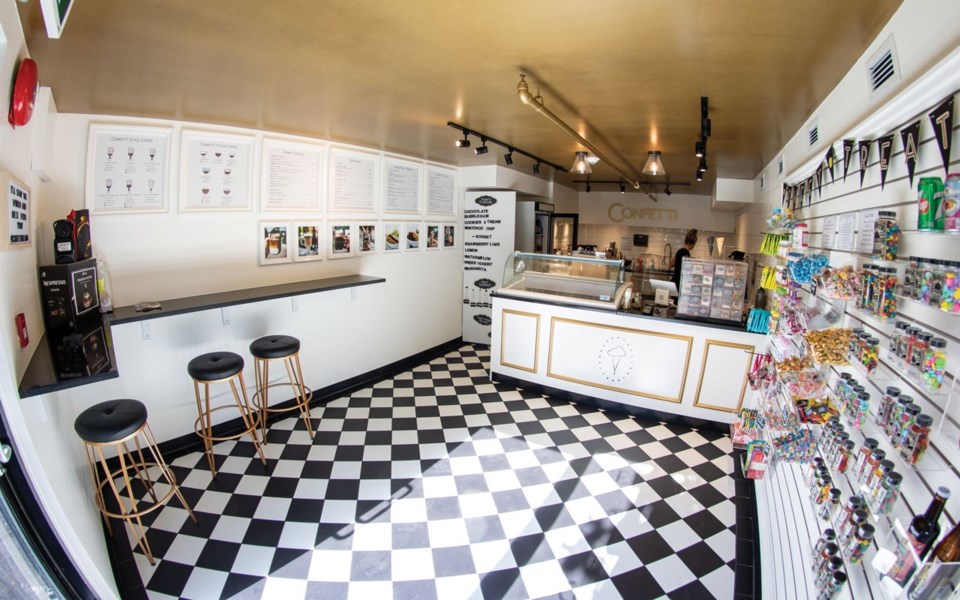 it's a celebration New Creekside gelato and smoothie bar Confetti draws on inspiration from London's Covent Garden for its interior décor. The shop offers 30 toppings to have your ice cream or smoothie bowl exactly the way you like it. photo submitted

As part of Capital Zed Creekside Concepts, Kaori Zage and her husband have made it their mission to rejuvenate the long-sleepy neighbourhood with a flurry of new and unique culinary and retail concepts. That includes the latest addition to Creekside, Confetti, a gelato and smoothie bar that is all about customization.

"The idea was we really wanted to bring a sweet shop to Creekside," said Zage when reached in her home base of Singapore. "One thing that was lacking there was ice cream, so we decided to do a combination of ice cream, coffee and frozen drinks."

Opened in August, Confetti serves up locally beloved Lucia Gelato with a smorgasbord of toppings to choose from—30, to be exact—that is reminiscent of the sundae bars of yesteryear. That, of course, includes the kinds of indulgent treats you'd expect, such as sprinkles, M&Ms and marshmallows, as well as healthier options like fresh fruit, hemp seeds and goji berries—the perfect accompaniment to Confetti's selection of smoothie and acai bowls. "Our tagline is 'Your treat, your way,'" Zage said. "It started with ice cream, then it was like, 'Well, what about some healthy alternatives?'"

Confetti also offers a line of specialty coffee drinks that Zage was adamant would be made the traditional way.

"We're actually making the milk-to-coffee ratio true to what you would find in Italy for a proper latte. I'm obsessed with my coffee, but I want it the way I get it in Italy. It's really taking the proper ratios," she explained.

The shop uses Nespresso coffee by design, as Zage didn't want to step on the toes of other Creekside coffee purveyors.

"We purposefully didn't do the barista style of coffee, we did Nespresso because ... we don't want to cannibalize other people's business," she said. "Starbucks has your barista, it's a little bit more automated. BrEd just opened and they have a La Marzocca machine, so I felt really strongly that we shouldn't do something else that would directly compete with that."

For the décor, Zage said the shop's interior was designed with London's airy Covent Garden in mind.

"We're trying to take a tiny little space and tell its own little story," she noted. "I think it's really cute. It's something that I had seen and envisioned from my walks around London. I wanted to bring the look and feel to the space. I worked with some local people and pulled it together."

Confetti is the first of several food and beverage concepts Capital Zed is planning for Franz's Trail. While she was tight-lipped about the details, Zage said plans are in the works to bring an Asian-style restaurant, a wine bar and a speakeasy to Creekside next year.

The jet-setting Zage has drawn inspiration everywhere from the boldly flavoured street food of Vietnam to the Burlingtonian architecture of London's historic Savile Row in the conceptualization of the new businesses. You'd be hard-pressed to find a developer that is more hands-on, fretting over what would be considered minor details by other big-money investors. In the fall, she brought in a host of chefs from Asia to test recipes and source out ingredients from Vancouver. She is dead-set on bringing authentic cuisine to the neighbourhood that remains accessible—both in flavour and price point.

"I had originally hired some consultants based in Canada and I quickly realized I want people who actually cook this food, to really understand how we're going to make this," she said. "There's been so much effort put into actually getting these ingredients so we can make sure we can cook it the way it's cooked in Asia."

Stay tuned for more news in the new year on the plans for Franz's Trail. In the meantime, Confetti Gelato is located at 222-2063 Lake Placid Rd. and is open Monday to Friday from 9 a.m. to 5 p.m. For more, visit confettigelato.com.