How sweet it is: Bearfoot pastry chef named ambassador for revered chocolate brand

Dominic Fortin will collaborate with pastry chefs from around the world for Cacao Barry
Aug 17, 2016 6:00 PM By: Brandon Barrett 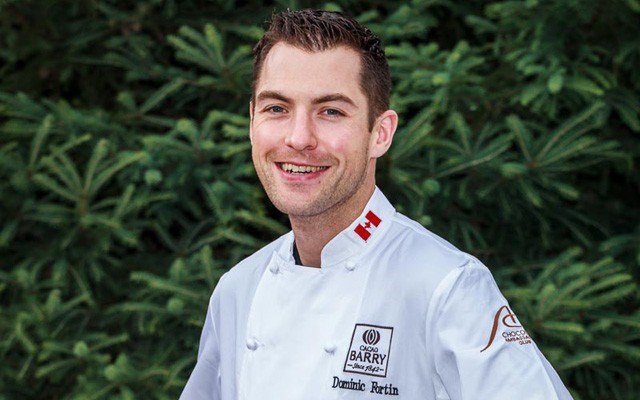 As a young cook starting out, Bearfoot Bistro's Domenic Fortin didn't see a future for himself as a pastry chef.

A decade and a half later, he's more than happy he stuck with it.

"I kept on doing it and I love it," said the executive pastry chef, who was recently named as one of 13 Canadian ambassadors for the revered French chocolate maker, Cacao Barry.

Fortin will test out new products for the company and collaborate with other pastry chefs and chocolatiers to "influence the world of pastry through innovation, artistry and technical expertise." He has already developed two new products in Cacao Barry's Or Noir chocolate lab: the earthy Quannah dark chocolate, a blend of Peruvian, Cuban and Tanzanian cocoa; and the Moema milk chocolate which, at 52-per-cent cocoa, is less sweet than your average milk chocolate.

"I'm really proud of that one because it's really different than what you find on the market," Fortin said.

The young chef now joins the close to 120 pastry chefs and chocolatiers from over 20 countries who have been invited to Cacao Barry's ambassador club.

At the tender age of 33, Fortin is the youngest Canadian to fill the ambassador position. He said he feels the pressure to prove himself to his older colleagues.

"It's going to be a bit stressful," he said. "I'm going to have to work hard to try and be at the same level as the other (ambassadors)."

Whatever stress Fortin is feeling, there's no doubt he belongs among such esteemed company. His desserts, often inspired by nature and the bounty of seasonal products available in the region, consistently push boundaries and play with taste and texture in a way that transforms them into culinary spectacle.

"We always use a lot of texture — we think about that a lot," Fortin explained. "We use lots of texture so that it's not boring to eat and you always want to take one more bite."

Trained in French cuisine, with its rich history steeped in tradition and regiment, Fortin's first job as a pastry chef was actually at a Japanese restaurant, and it's there where he combined his French sensibilities with the simple and bold ingredients of Japan. "We were doing tasting menus the way the French would do it, but with Japanese cuisine," he noted.

But it wasn't until Fortin began at the Sooke Harbour House — the iconic Vancouver Island restaurant that also counts Bearfoot and Araxi executive chefs Melissa Craig and James Walt as alumni — where he truly discovered the importance of innovating.

"That is where I got really creative ... because we had to change the menu every single day using products on the island," he said. "That was really demanding, and it's probably why I get so bored so quickly with my dishes. To be honest, I put a dish on the menu and a week after I want to change it."

It's a lesson that Fortin has also extended to the rest of his team at the Bearfoot, where he allows his sous chefs a long creative leash.

"For me, creativity is really important. Here in my pastry shop, there is a creativity board and (the chefs) don't have to put anything on it, but I like when they bring ideas to the table. Every time I work on a new dish, I make them try it and I just let them speak," he said. "Sometimes they bring really good ideas and I end up changing a dish because of that. It's not my own vision. This is why I often say 'we' in the pastry department — it's my team, it's all of us."

Fortin is headed to Montreal next month to meet with the other Canadian Cacao Barry ambassadors at a sort of culinary boot camp. He said he's excited to pick the brains of some of the top pastry chefs in the country.

"You learn a lot from that, from just exchanging concepts," he said.