In the heat of the battle

Grilling two of the longest-running competitors of the Canadian National BBQ Championships
Aug 2, 2019 5:10 AM By: Brandon Barrett 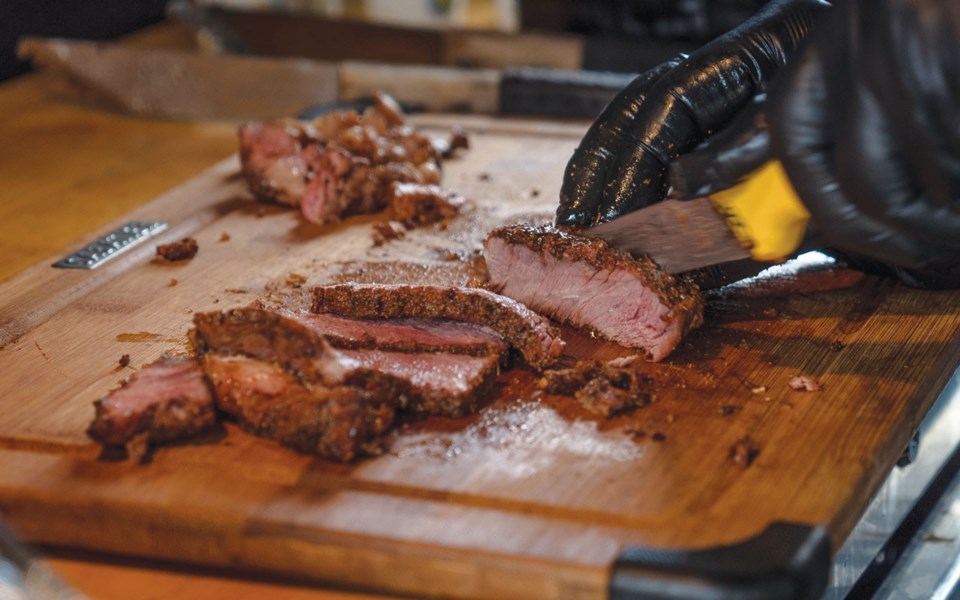 LICENSE TO GRILL The Canadian National BBQ Championships welcomes competitors from all over North America, who will duke it out for the title of grand champion from Aug. 2 to 4. Photo submitted

John McGee, six-time grand champion of the Canadian National BBQ Championships, has one simple piece of advice for his fellow competitors.

"Do not offend any judge. Seriously," says McGee, who runs the Duvall, Wash.-based Happy Campers BBQ Team alongside his wife, Rhana, who is affectionately referred to as "Taste Bud" for her well honed flavour palate.

Of course, it's always a good rule of thumb to avoid bringing up religion or politics in front of polite company, but this isn't the type of offence McGee is referring to. "Basically for each meat, you've got six judges. There are six different sets of taste buds on that table. You have to find a happy medium that will please every palate. It's not easy," he said.

After many years on the competitive circuit, the McGees have gathered plenty of intel on the preferences of different judges. But after so much success—Happy Campers has won Pacific Northwest's barbecue team of the year six times—they haven't had to tweak their formula too much. "We have changed our recipes very little over the years," McGee said. "If it ain't broke, don't fix it."

The Canadian National BBQ Championships return this weekend to Creekside, where McGee will be defending his grand champion title. Another longstanding competitor is Dave McKay, the cameraman turned pitmaster who has taken part in the event since 2002. While he's won just about every other award under the sun, McKay has yet to claim the grand champion title, an overall award based on the competitor's barbecued chicken, pulled pork, brisket and pork ribs.

"There are so many good cooks on the tour, it's impossible," he said of the coveted title. "Unless you're cooking every weekend like a lot of them are, you just don't get to practise your skills enough. Barbecue is worse than having a boat; you're just throwing money at it the whole time."

McKay welcomes the competition, but it's the bond he's developed with his fellow grillers he relishes the most.

"The spirit of barbecue, when you actually compete, is something totally different from anything else I've ever done. The camaraderie is incredible," he said. "It's like a pack of nomads travelling around and meeting up a few weekends every month in the summer to compete. You're really not winning a lot of prize money, even if you are winning. It's the bragging rights and being with friends that you just see during the summer."

Barbecue being the hyper-regional cuisine that it is, the Pacific Northwest has yet to earn the same reputation as its Southern or Midwestern counterparts, but that doesn't mean the region hasn't developed a style of its own. West Coast barbecue tends to fall on the sweeter side, although McKay said that's starting to change.

"I used to have to add honey to my barbecue sauce that I used just because the judges seemed to like it better. But that's not the case anymore," he said, adding that the smoking woods used will generally dictate a finished product's flavour profile.

McGee sees the Pacific Northwest drawing from all different barbecue styles, as he typically does on the competitive circuit, describing his brisket as "Texas style," which tends to be big on hickory and a tangy, tomato-based sauce; his pulled pork as "Carolina style," using a typically thinner, vinegar-based sauce; and his ribs as a mixture of the Kansas City style, which is usually slow-smoked over a variety of woods before being slathered in a thick and sweet tomato-based sauce, and what he calls a "Northwest style."

"It's a little bit of everything. It's based on Kansas City style, but it's more or less the one thing that we have that is different from what everyone else is doing," said McGee, refusing to divulge any further secrets.

For the non-competitive set, there's plenty to enjoy as always at the Canadian National BBQ Championships. Centred around Dusty's, the bar will be hosting two all-you-can-eat dinners on Saturday, from 5 to 7 p.m. and then from 7:30 to 9 p.m., as well as live music daily, which will include a VIP area with food samples and cocktails. (See related story on Daniel Wesley's live concert on page 73.)

Dusty's head chef Vinnie Hall, who recently made the move from Whistler Blackcomb's mountaintop fine dining restaurant, Christine's, said there will be some new offerings this year in addition to the endless amounts of barbecued meats available.

"We've upped the level of what we're doing as well, with the type of menu we're putting on," he said. "There are hocks and croquettes and tenderloins and things going on along with the usual briskets and chicken and that sort of stuff. The garnishes we take on are a lot of Asian-inspired stuff, but with a bit of a barbecue twist."

For the full schedule of events, and for tickets, visit eventbrite.ca and search for "Bottomless BBQ Buffet."