It's a celebration: New Year's food traditions from around the globe

Myriad cultures mark the calendar turning over with distinct dishes
Jan 1, 2020 1:00 AM By: Brandon Barrett 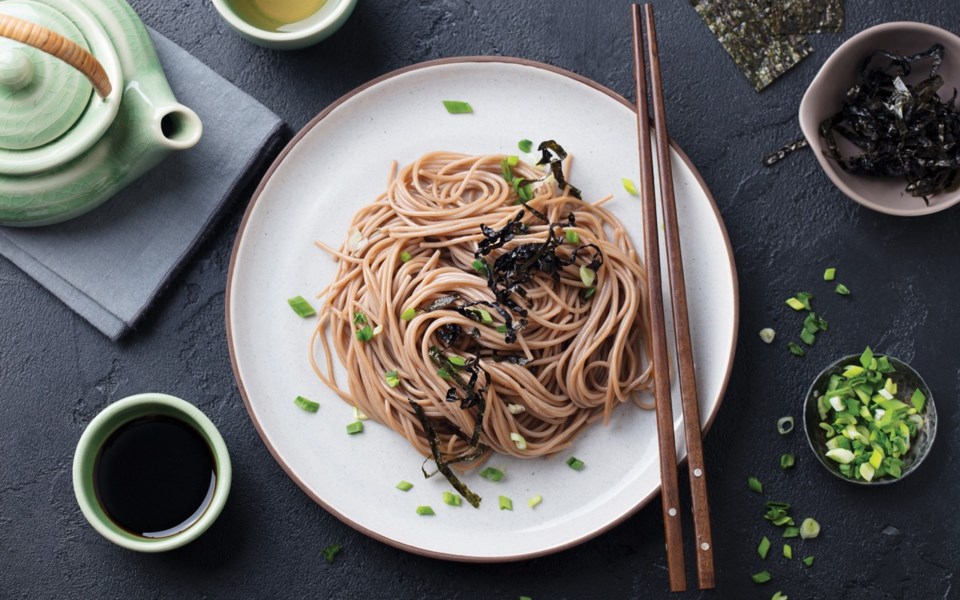 LONG NOODLE, LONG LIFE In Japan, it's common for soba noodles to be consumed at midnight on New Year's. Diners are discouraged from cutting their noodles, as they are meant to signify a long life, instead slurping them down whole. <a href="http://www.Shutterstock.com">www.Shutterstock.com</a>

The ol' Barrett clan was never much one for ritual. The most enduring holiday tradition in my family was one that I have since learned is popular in many Jewish households: going for Chinese food.

While we aren't Jewish, my parents would take us out for dim sum, that ever-so-tasty Cantonese version of brunch, on Christmas morning. I think it was more as a tactic to avoid slaving over a 10-pound turkey than any real deference to the past.

That lack of holiday tradition has led to a deep fascination in me with the long-held rituals of others. And while, at least in the West, Christmas culinary tradition is typically rooted in some form of roast bird, New Year's is a different beast altogether. Probably the most common North American tradition is a flute of champagne when the clock ticks down to midnight, but beyond that, the New Year's menu is highly dependent on a particular family's history and convention. In many other cultures, however, the New Year's offerings are firmly rooted in the past, and are often meant to inspire good fortune in the months ahead.

The Japanese, for instance, are obsessed with foods that will set the course for the year to come. Mochi, spongy cakes made from pounded, steamed rice and filled with sweet red bean paste, are offered to the Gods as a token. It's also common to eat soba noodles, preferably long in length, at midnight. In fact, diners are discouraged from cutting their buckwheat noodles, as they are meant to signify a long life, instead slurping them down whole.

In Spain, it's customary to eat 12 grapes right at the stroke of midnight, representing each month of the coming year. You can even chart how your year will go, with sweet grapes signifying a good month and sour grapes representing a bad one.

Cabbage is a big part of the German New Year as, similar to several other national traditions, it's thought that the more greens you eat, the more prosperous your year will be. The vegetable is often paired with pork, as pigs are viewed in Germany as a progressive animal since they scratch their feet forward in the dirt, a symbol of resilience for us humans as we trudge ever onward in the 12 months to come.

In nearby Netherlands, the Dutch have an interesting New Year's Eve gastronomic tradition: oliebollen, which translates literally to "oil balls" but is actually a deep-fried doughnut (for a more Canuck-appropriate comparison, think Timbits), commonly filled with raisins, currants and sometimes a zest of candied fruit and dusted with powdered sugar. While the origins of the bite-sized confection are unclear, it is said by some to have been introduced in the 15th century by Sephardic Jewish immigrants as a way to line the stomach with oil as a shield against the sword attack of a mythical evil goddess. Not a bad excuse for loading up on deep-fried carbs, if you ask me.

In Turkey, many purposefully muck up the doorways to their homes by smashing pomegranates to pieces, with the number of seeds that fly out predicting how much good luck you'll have the following year.

El Salvadorians crack an egg into a glass of water and, once the clock hits 12, everyone interprets what their yolk looks like, which symbolizes what the new year will bring.

In Belarus, single women will use corn kernels to see who will get married first in the upcoming year. Each woman piles the kernels in front of her before setting a rooster loose. It is said that the first pile the rooster gravitates to belongs to the woman who will marry first.

As a species, us humans tend to carry a deep fear of the unknown, and these culinary rituals are one way we can assuage the unpredictability of the coming year. Without the luxury of a crystal ball, we rely on superstition to reassure us. But for all the forward-looking that comes with a new year, ultimately, these traditions are just as much about what came before than what lies ahead. Food, particularly around the holidays, is a gateway to the past. Taste and smell are, after all, the senses most associated with memory, and the right dish can transport us to a better time.

"Through food, we evoke our youth and recapture happy times," Dawn Johnston, a University of Calgary professor who teaches a course in food culture, told Zoomer in a 2017 article.

And for those that don't associate the holidays with good memories, these traditional holiday foods are often aspirational, reminding us of the ideal youth we yearned for.

"Food satisfies a longing for the things we had ... or wish we had," Johnston added. "We can't change our families or our history but making traditional dishes gives us a sense of control over the holidays, the feeling that this time we can get it right."