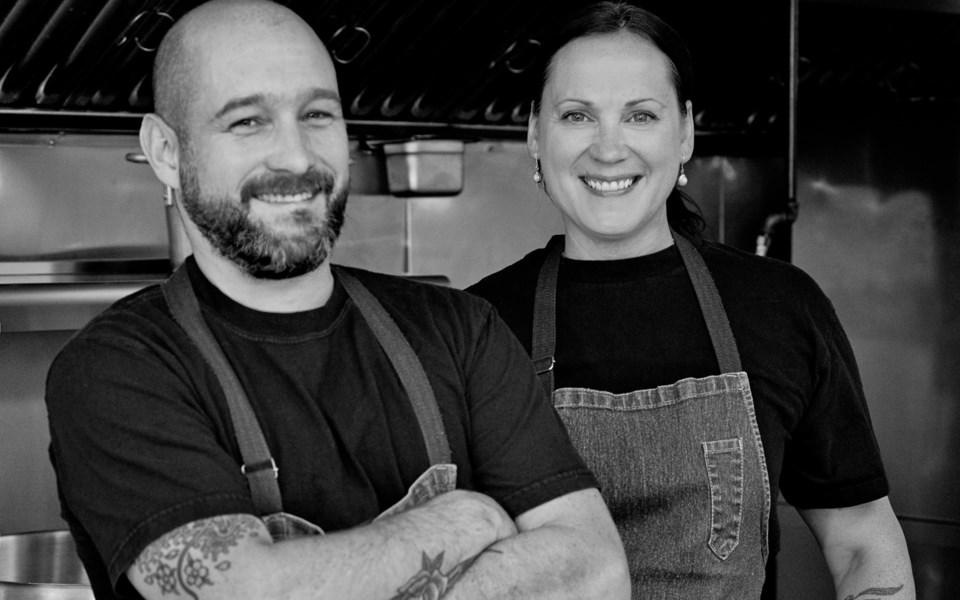 Whistlerites are mostly known as warm, welcoming folks, but even Leslie and Etienne Garneau were taken aback when neighbours would show up at their door unannounced.

“We’ve had people show up like, ‘I’m hungry and I don’t feel like cooking. What’s for dinner?’” Leslie said with a laugh.

Under normal circumstances, this kind of unprompted pop-in might seem unusual, but when you’re two seasoned Rimrock chefs cooking delectable homemade meals-to-go for the community, you can expect some hungry visitors from time to time.

Having first met at the Rimrock in the early 2000s, the Garneaus launched a side gig last fall that makes the most of their years of experience behind the line at one of Whistler’s most beloved and long-running fine-dining institutions: Babalicious, a delivery service offering pre-cooked, frozen meals that are almost as easy to prepare as they are to eat.

Affectionately known as Baba since childhood, Leslie’s cooking earned the “Babalicious” moniker after “the big, one-pot, kickass” staff meals she would prepare for coworkers at the Rimrock.

“One of our coworkers started saying, ‘Oh, that’s Babalicious!’ because Baba would make the staff meals. ‘Oh, that curry is Babalicious!’” explained Etienne. “When we started this little side hustle, we were looking for a name and that just came naturally.”

Known for her hearty curries—both of the Indian and Southeast Asian variety—Leslie and Etienne have teamed up to craft a shifting menu based on what’s in season, as well as what staples their clientele is asking for.

“We get inspired by something and then do that,” Etienne said of the flexibility their small-scale operation allows them. “At the same time, a lot of our customers are like, ‘Oh man, when are you making meatballs again?’ We’re pretty micro as it is right now, so we’re like, ‘Sure, we’ll make meatballs again.’”

Babalicious ready-made meals have also proven popular with backcountry enthusiasts, both because of their comforting quality and how easy they are to prepare. [Most meals, which generally serve two with a side, are vacuum-packed in a sous-vide bag, which can be boiled directly in a pot and be ready to serve in minutes.]

“We have a friend who ski-toured last winter. He hiked up to a hut … in the Spearhead and he said it was so awesome because the guys he went with had freeze-dried food,” Leslie recalled. “He pulled this thing out and they were looking at him and he opens it up after it’s cooked, and they were like, ‘OK, seriously? What are you eating?’”

Unsurprisingly, Babalicious saw a spike in orders at the start of the pandemic, which has made the Garneaus think about how they can better serve a dining public whose appetites for eating out may be changing due to COVID-19.

“We want to branch out and also do some private cheffing and bring the dinner to people in their home and [provide] the entertainment of it,” said Etienne, who added that they are also hopeful to get in touch with local Airbnb owners to stock up visitors’ fridges with nutritious, chef-prepared food before their arrival.

“You travel from wherever and get to Whistler, how many times do you get a Delissio pizza as your first meal? But what if you had a couple meals all ready to go, with a little bag of pasta or a thing of rice and a bottle of wine on the counter?”

Ultimately, Babalicious sprung out of a desire to serve a public—whether they show up at the Garneaus’ front door or not—that consistently lacks the time and inclination to prepare the kind of wholesome, delicious food they really want.

“What spurred the idea was hearing from everyone we know, the worker bees in town, that they had no time for anything,” Leslie relayed. “We just started to think about how we could help people and make it super easy with a delicious dinner for their family—and the kids will eat it, too.

“Honestly, I’d love to be able to grow this so that it can be what we do for work, period. But, really, I just want to keep making good food.”

For more information and to view the menu, visit babaliciouswhistler.com.

Green Moustache founder is heading across Canada to raise awareness of the power of food as medicine
Sep 6, 2020 8:00 AM

‘You eat whatever you can’
Aug 30, 2020 8:00 AM
Comments
We welcome your feedback and encourage you to share your thoughts. We ask that you be respectful of others and their points of view, refrain from personal attacks and stay on topic. To learn about our commenting policies and how we moderate, please read our Community Guidelines.