For Julian Owen-Mold, executive chef at the Hilton Whistler's Cinnamon Bear Grille, Dine in Whistler is a chance to highlight what the restaurant — and our region — has to offer.
May 8, 2013 9:00 PM By: Alyssa Noel 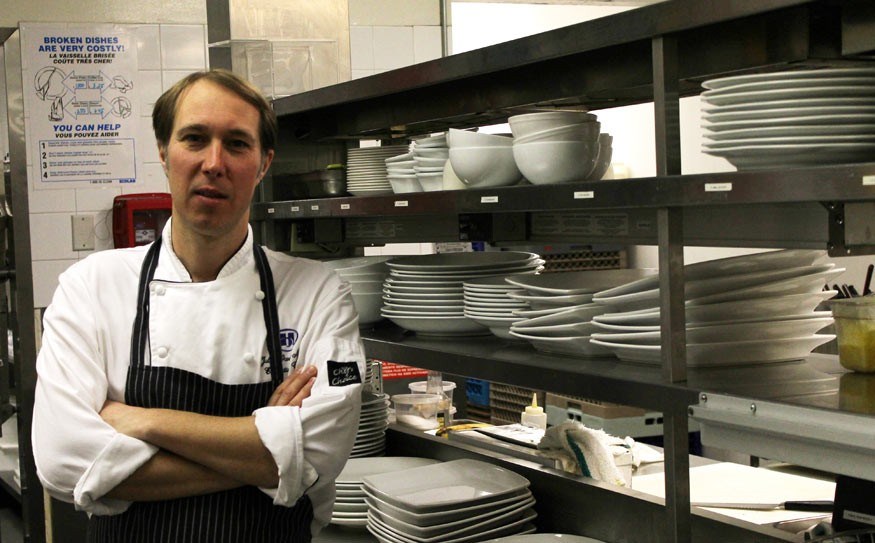 For Julian Owen-Mold, executive chef at the Hilton Whistler's Cinnamon Bear Grille, Dine in Whistler is a chance to highlight what the restaurant — and our region — has to offer. "Our philosophy here is regional, local, sustainable," Owen-Mold says. "The menu I've chosen is the style of our restaurant: casual, contemporary, Northwest."

While the restaurant will still feature its regular menu, the Dine in Whistler menu will have everything from local grilled octopus to West Coast cod chowder, Dungeness crab and Savary Island clams. (Owen-Mold offers Pique readers his versatile risotto recipe, which can be supplemented with everything from avocado to Halibut, on the next page.)

"It is a slow time, especially from the hotel and restaurant perspective," he adds. "It's great they've put in these initiatives to draw in guests from the Lower Mainland. At the end of the day, we do have a great culinary base in Whistler."

This isn't Owen-Mold's first Dine in Whistler; the chef has been working in town for the last three years and participated in Vancouver's version of the event before that. "I think it's a great thing," he says. "I've worked in London and they have something similar there."

He adds: "We're happy to be involved in Dine in Whistler. (Organizers) changed a few things this year to capitalize on the market in a smaller amount of time. It brings people to Whistler to dine and enjoy what we have to offer."

For many the event marks the start of the resort's spring lull, before it swings into high gear for the summer.

The crowded village stroll has cleared, the mountains are dotted with diehard spring skiers and snowboarders and the string of events that kept us so busy over the last few months have slowed to a trickle.

In part to ensure local restaurants don't suffer from the dead season slump, Tourism Whistler and the Restaurant Association of Whistler got together to host the annual Dine In Whistler event to draw local foodies in, and those from across the Lower Mainland, to explore culinary offerings at a discounted price.

"It's definitely positioned in the May period for a reason," says Kirsten Homeniuk, with Tourism Whistler. "It does quiet down in the resort. That's why we target the Vancouver market (rather than international). There's a couple of things going on in May that we think, collectively, gives Vancouverites a compelling reason to visit Whistler."

That includes golf courses (which opened last weekend), spring skiing and the beginning of mountain bike season, she adds.

With 23 restaurants taking part in the two-week event this year, the hope is Dine In Whistler can serve as icing on the cake. "The Dine In program gives visitors a wonderful opportunity to experience delicious, multi-course menus from a variety of restaurants at a really great price point," she says.

Participating establishments — which run the gamut from casual to fine dining — offer menus at one of three price points: $21, $31 and $41. "It's really solid participation," Homeniuk says. "Tourism Whistler is really happy with that number. It's on par with what we've seen in past years. It really showcases the wide range of culinary offerings in Whistler."

The event — taking place this year from May 1 through 16 — has run under the Dine in Whistler name for the last five years, although it's taken place in some capacity for over a decade. The major change this year is the time span in which it's running. Organizers have condensed the event from two months into two weeks.

The new timeline will allow Tourism Whistler to devote marketing dollars to make a bigger splash in Vancouver, the event's target market, and allow organizers to supplement with more programming in coming years, Homeniuk says.

"We're working with the Restaurant Association to grow this into more of an event, per se," she says. "(We want to) bring in more animation within the restaurants when the program is running. We haven't talked about what that would be, but there may be opportunities (like) meet the chef."

Other participating restaurants include Black's Pub & Restaurant and The Brewhouse Whistler with $21 menus, Alta Bistro, Araxi and Rimrock Café at $31 pricing and Bearfoot Bistro and Hy's Steakhouse at $41. For a complete list and more information visit www.whistler.com/dinein.

2 - whole lemons, grated with a micro plane and then juiced

Melt 1 1/2 tablespoons butter with the olive oil in heavy bottom large saucepan over a low to medium heat.

Firstly, add shallots and fennel then sauté lightly until tender and translucent, about four minutes.

Then add the risotto rice and stir using a wooden spoon for at least one minute until the rice in coated in the oil and butter.

Pour in the wine and half of the lemon juice. Stir until evaporated.

Then pour in the remaining broth 1/2 cup at a time, allowing broth to be absorbed before adding more and keep stirring frequently until rice is al dente and creamy.

Add in the Parmesan and remaining two tablespoons butter.

Season risotto with salt and pepper, then serve.