FORK IN THE ROAD: Keep your eye on the balls 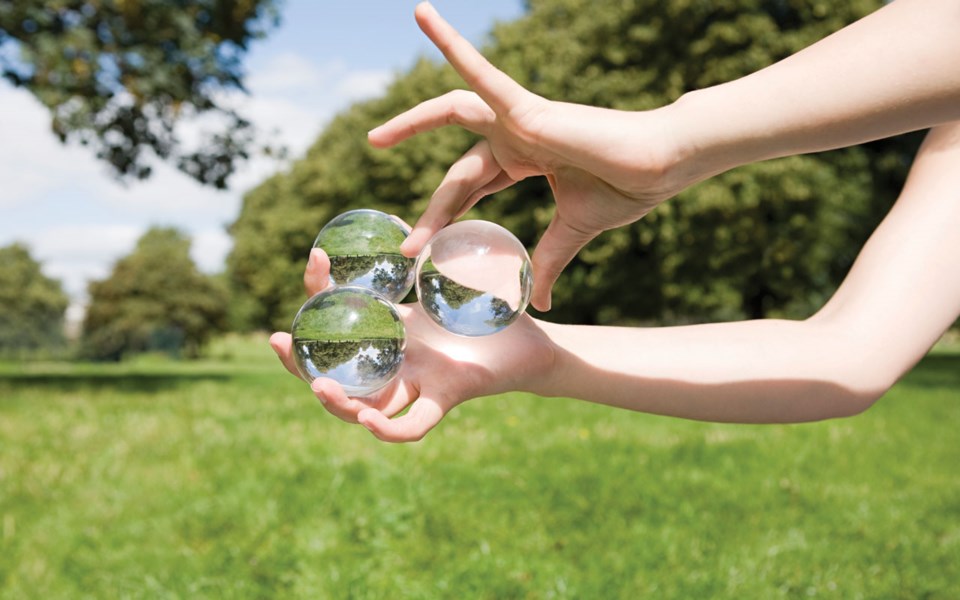 There’s a funny part to this whole coronavirus/COVID thing. But not sure how I mean the word “funny.”

It’s definitely not funny, as in, laughing-emoji funny. And it’s not funny, as in, odd or difficult to explain because it’s right in keeping with so much we know about ourselves. Maybe it’s the “makes me feel uncomfortable” kind of funny.

Right, uncomfortable-funny, as in, it’s not at all funny the way the coronavirus has pointed up our greatest human folly, and rubbed our collective nose in it—how we play the short game when we should be focused on the long haul. The real long haul. The climate crisis that’s still out there.

Greta’s fading from hearts and minds—and the headlines. Extinction Rebellion has taken on a whole new meaning. Government and corporate policies and foci have, for the most part, changed course, while our very consciousness has seemingly been subsumed by a seemingly tiny thing, a new virus, which would count itself, if it could count, as one of the most abundant living things on Earth.

Though they’re not exactly alive. They’re what Stanford virologist Jan Carette, as reported on Stanford Medicine’s highly recommended blog, describes as being only maybe, or sometimes, alive. Depends on where they are.

Outside of a cell, a virus is inert. It can’t reproduce, or do anything much, on its own. Remember that next time you don’t “feel like” keeping your distance or wearing a mask to keep it contained.

The coronavirus, or any virus, is the ultimate parasite—you might say “poison” (the Latin root vīrus refers to poison and other noxious liquids). It can only “live” and spread, doing its damage, in conjunction with your, my, or just about any living thing’s cells, each virus having its own preferred host, as it were. Animals. Plants. Even bacteria. Any cell in a storm will do.

As for the fact that viruses are, indeed, the most abundant thing on our planet, I really like how the Stanford Medicine blog illustrates that. If you multiply a billion by a billion, then multiply that by 10 trillion, you’ll get 10 to the 31st power, or 1031—the mind-bogglingly huge number of how many individual viral particles are estimated to populate Earth.

Funny thing (there’s that “funny” bit again), though the climate crisis can’t be considered or enumerated the same way, it’s also the most abundant thing on our planet, permeating every corner, impacting every biosphere, on land or water, in the atmosphere (birds aren’t breeding as much because of the increasingly warmer temperatures).

As for it being poisonous or noxious, I’ve often said at dinner parties and the like, when we happily and so innocently indulged in such pleasantries, that I wished climate change was a sulphurous yellow-green colour, or stunk like a gas leak. The worse it got, the stinkier or more bilious-coloured it would be. Maybe then, as we better sensed the danger, our limbic brain would override our supposedly logical one and drive us to be as effective and all-hands-on-deck-it’s-our-Dunkirk-moment selves as we’ve been with the corona crisis, if you’ll permit me the shorthand.

The other funny thing is the climate crisis needs us to perpetuate it, just like the other “C” crisis. The more unconsidered and careless our activities, the bigger and bolder and more destructive each gets. Do nothing and all hell doesn’t just break loose, it’s hell on Earth. Period.

I couldn’t believe the wishy-washy comforting self-talk in the pandemic’s early days about the bright side, or the silver lining, or whatever you want to call it. At least we were doing good for the climate, staying home. Uh, where was the scientific evidence backing that claim?

Carbon dioxide report, Scripps Institution of Oceanography based in San Diego, my old hometown. Carbon dioxide report, National Oceanic and Atmospheric Administration (NOAA) based in Silver Spring, Md.: The amount of CO2 in the air in May hit an average of just over 417 parts per million—the highest monthly average ever recorded. Ever.

We’ve got more CO2 in our atmosphere now than there’s been since humans first walked the Earth, some 315,000 years ago. And while it’s hard to pin these sorts of things down, given much of the data is from pre-history and scientists have to rely on things like measuring the amount of CO2 in bubbles in ice core samples hundreds of thousands of years old, and extrapolating from that or other geologic evidence (I’ve held one of those ice cores, a 120,000-year-old one, at the British Antarctic Survey in Cambridge in the U.K., and I’ve seen the readings), it is possible to do so.

So here’s another one of those funny/not-so-funny things about the sea of “C” changes surrounding us: Even though there is more CO2 than ever in our atmosphere, there are fewer planes flying. And fewer flights mean less weather data.

According to a free-access research letter in Wiley’s online publication, Geophysical Research Letters, weather forecasts have become less accurate during the pandemic because fewer commercial aircraft are in the sky gathering data along their flight path, like temperature and pressure, relative humidity and wind. With so many flights grounded, the world has lost 50 to 75 per cent of its aircraft weather observations.

Not to confuse weather forecasting with climate, but you have to admit there’s irony at play there as well.

So what’s it going to be, folks? Coronavirus/COVID-19 or climate change?

Surely we’re not stupid enough to think it’s an either/or game. We can’t take our pick. We have to keep both balls in the air, and play them both right.

Glenda Bartosh is an award-winning journalist who sees climate change as far more dangerous than COVID-19.