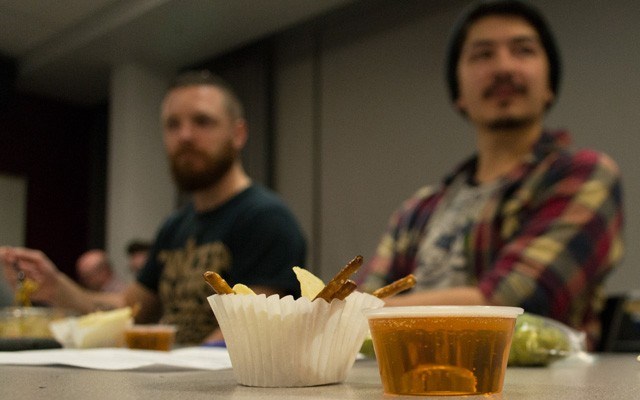 CLASS IS IN SESSION Students can gain a foundation in home brewing as part of the Whistler Village Beer Festival's Introduction to Brewing course being held at the Maury Young Arts Centre from Sept. 12 to 15. Photo submitted

Sure, you love beer, but do you speak beer?

Have no fear, fellow brew lovers: Sebastian Ibarra is here to help. The Simon Fraser instructor is leading a four-day intensive course leading up to next month's Whistler Village Beer Festival that will teach aspiring brewers the language of libation.

"They will be able to speak beer," he said. "(Students) will be given the basic understanding of beer and the vocabulary so they can, with confidence, speak in general terms about the historical, economic, biological, chemical and mechanical processes that go into the making of beer."

Part of SFU's Craft Beer and Brewing Essentials Certificate program, this introductory course is a first for the festival, running Sept. 12 to 15 at the Maury Young Arts Centre, and could lead to more brewing classes in Whistler in the future.

"Originally the Whistler Learning Centre group approached us and they thought there might be an interesting opportunity to bring SFU programs to Whistler," explained Larry White, director of career and professional programs at SFU. "When we were talking about some of our courses, the Introduction to Brewing course stood out amongst the group, and we thought, 'what better opportunity to anchor it in Whistler than immediately adjacent to the village craft beer festival?'"

The 30-hour course will provide an overview of the ingredients and processes that go into craft brewing, reaching back to the origins of beer production in ancient times all the way up to the agricultural advancements that lead to the use of barley, hops and other plant-based ingredients for brewing.

"(The course is for) people from all backgrounds, really: People that are investing in brewing, people that are just piquing their interest in the subject from a home brewer's perspective or just for the general enjoyment of beer," Ibarra said.

Held the week before the Whistler Village Beer Festival, running Sept. 14 to 18 at Olympic Plaza, White said the intention is to attract guests who will stay in the resort for the long haul.

"We're really hoping it might attract particularly folks interested in coming to Whistler for the weekend for the village beer festival who might want to extend their stay and come a few days early to participate in a course like this," he said. "That would beneficial to us and it would be beneficial to Whistler as well."

Heading into its fourth year, the festival is testament to the ubiquity of quality craft beer in B.C. — this year's five-day event will feature 120 beers from over 60 breweries — and Ibarra has seen that trend extend into the home brewing arena as well.

"Maybe 10 or 15 years ago you'd hear somebody was a home brewer and you'd think their beer probably tastes like crap," he said. "Right now you talk about it with anybody and they all have a few home brewer friends and they all make great beer. More and more you see people spending more time and energy and effort into creating their own beers at home and taking the time to learn what it takes to make good beer."

There are 28 spots remaining for the Introduction to Brewing course. Tuition is $1,315. To register, or for more information, visit www.sfu.ca/continuing-studies/courses/brew/introduction-to-brewing.html.