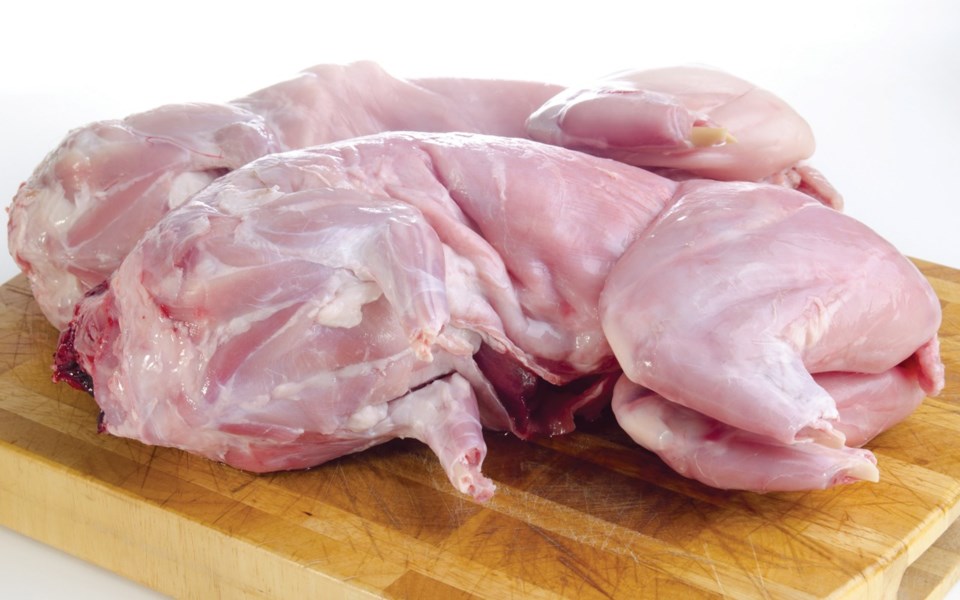 no mo' rabbit, baby It was a 'baby rabbit' something like this one that anchored the last meat-based meal Joan Richoz cooked. Like her, many people are moving to plant-based eating choices for many good reasons. shutterstock.com

It was a rabbit—a rabbit at a Swiss market—that sent the person who's been a vegetarian for the longest period I've ever known on her meat-free journey almost five decades ago.

If you're lucky, you'll have enjoyed one of Joan Richoz's amazing vegetarian meals in the cozy wood home she shares with husband, Marcel, high up on the ridge on Whistler's Drifter Way. You might even have heard her "Becoming Vegetarian" story.

In 1971, she and Marcel moved to Switzerland, where he's from. "It was hippie times, and a lot of people we knew were becoming vegetarian, and we thought, you know, we'll give it a try," she says. "Plus I've never been able to kill an animal. I caught a fish once and I had to throw it back..."

But it's the last meal she ever cooked with meat that really stands out. "We had company coming for dinner and, of course, in Europe, you know exactly what kind of meat you're buying," she recalls. "I saw this whole rabbit hanging by its legs, and when it turned, it looked like a little baby because it was already skinned."

Joan did buy that rabbit-cum-baby, and she cooked it, but that pretty much ended an era, a meat era, for her. Which is exactly what the United Nations is encouraging us all to do.

While it stopped short of urging us to go totally meat-free, another headliner report released last week by the UN's Intergovernmental Panel on Climate Change (which, coincidentally, is headquartered in Geneva, Switzerland) called for major changes in the way we farm and eat.

The big take-aways: Human use directly affects more than 70 per cent of global, ice-free land; agriculture uses 70 per cent of all fresh water. Those of us not already doing so need to quickly and seriously move to a plant-based diet to rein in the climate crisis. If we choose not to, and keep up agri-business as usual, we're facing a very scary, very insecure future indeed. Clear enough?

Greenpeace uses this one-liner: "Less meat = less heat." Which is why I called Joan, who I knew would have some good, practical tips on making the change.

"The easiest way if you want to try it one day a week, the Meatless Monday kind of thing, is Mexican food. It's so easy!" she says. "For example, you could make a great big batch of vegetarian chili, and then you can have it as a stuffing for burritos, and you could put it in your food processor and have a dip—so you have the same thing three different ways. And it's not like you need three million different spices. You can use chipotle, or cumin and buy some cilantro because those are typical Mexican flavours."

Or try sautéeing up some onions, sweet potatoes, black beans and corn. Put it inside tortillas with cheese or crumbled up tofu on top, and bingo!—great-tasting burritos. And hummus with corn chips or pita makes a great, healthy snack with lots of protein.

Reams of books, articles and essays advocating plant-based diets have been published over the centuries—yes, centuries—and those can be eye-opening, too.

One of the earliest, On Abstinence from Animal Food, by the Greek philosopher Porphyry, is from the 3rd century BCE. Benjamin Franklin was a vegetarian. So was Joseph Rison, a vegetarianism activist who compiled the Robin Hood legends, and published his "Essay on Abstinence from Animal Food, as Moral Duty" in 1802. One of Joan's go-to's is Diet for a New America, by John Robbins, son of Irv Robbins, Baskin and Robbins co-founder, and a founder himself of the 500,000-plus Food Revolution Network.

But one of the finest, most influential books advocating a plant-based diet came out, coincidentally, the same year the Richozes went vegetarian. A bestseller even back in 1971, Diet for a Small Planet by the accomplished and duly recognized Francis Moore Lappé; contains loads of great meat-free recipes. A mainstay of '70s hippie/communal kitchens from Birken to Berkeley, it's been cited as one of the most influential books of the times, largely because it also explains the social and personal significance of going meat-free.

While breeding cattle that fart less and creating more smaller-scale organic farms are fine initiatives now underway to curb climate change, I don't think they're going to catch on fire any time soon, or at least we can't wait for them to. It's up to us, we, the people, to change the only thing we really can—ourselves and our habits.

So whether you opt for Meatless Monday, simply try to eat less meat, or go for the full (plant-based) enchilada, there are many good reasons to go meat-free.

The Mayo Clinic, a non-profit academic medical centre and one of our most respected sources of information for good health, has been encouraging us to eat a plant-based diet for years to reduce our risk of things like heart disease and stroke. Depending on your level of meatlessness, don't forget to consider nutritional impacts, too.

It's pretty easy getting enough protein through plant-based sources. However, according to Dieticians of Canada, if you go full-on vegetarian, you'll need almost twice the daily recommended amount of iron since we don't absorb iron from plant-based sources (non-heme iron) as well as we do from animal sources (heme iron). Low iron can make you tired, pale and irritable.

Also, if you go totally plant-based, it's tough getting enough vitamin B12—your best friend for healthy nerves and healthy red blood cells. Again, Dieticians of Canada is a good source to check with.

Now you're good to go meat-free—for you, for me, for a whole bunch of young ones just getting started in life, and for all the people we've never met in Africa and Asia and even the Okanagan who are already seeing hurtful changes in their climate and their future.

See you in the produce section!

Glenda Bartosh is an award-winning journalist who eats less and less meat the more she goes.