Line in the sand against our latest "DDT" 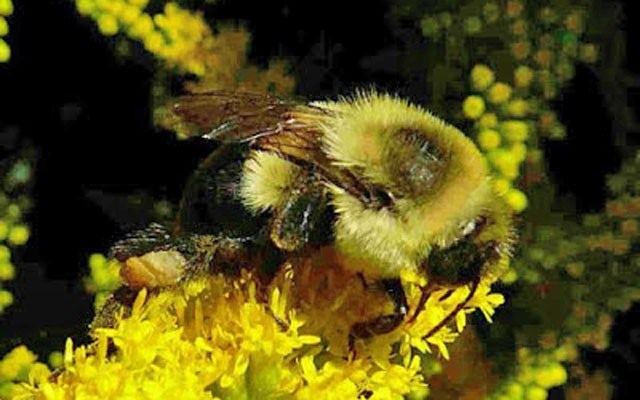 Loss of habitat; the so-called mysterious colony collapse; new diseases and parasites spreading like wildfire with global trade and climate change: I've been worried for years about bees, our sweet and vital agricultural partners. And for good reason — make that reasons.

Turns out, we humans are, once again, our own worst enemy engineering yet another noose around the life systems that support us, in this case one at the very heart of our food supply. Equally alarming is that the warning bells have been blaring for years.

The latest twist goes like this: At the behest of the International Union for Conservation of Nature, the largest professional global conservation network in the world, which is headquartered in Switzerland, a group of independent scientists called the Task Force on Systemic Pesticides was struck four years ago. They've been studying the scientific evidence in more than 800 peer-reviewed papers published over the past 20 years on systemic pesticides, namely neonicotinoids and fipronil.

Sometimes called neonics for short, these pesticides are used so widely they account for about 40 per cent of the worldwide pesticide market. Chemically similar to nicotine, which has been used as a pesticide since the 18th century, neonicotinoids act upon insects' central nervous systems. Various descriptions of their effect on insects use words like "drunken" and "dizzy." High levels cause paralysis and death.

This relatively new class of pesticides — the first new class to be developed in the last 50 years — was introduced in the early 1990s after its development by Shell and Bayer to replace older and supposedly more damaging pesticides.

Neonicotinoids have been "suspect" for years. But it was the conclusion from the Task Force on Systemic Pesticides that made recent headlines with this show-stopper: Because of the widespread harm they cause in nature — an effect "impossible to deny" — neonicotinoids should be banned like DDT. That notorious chemical was well-documented by Rachel Carson in Silent Spring, the 1962 environmental science classic that launched eco-awareness and led to the eventual global ban on DDT for agricultural use.

The task force's full report will be published next month but the prelim is chilling and clear. Despite manufacturers' claims to the contrary, the evidence is conclusive that neonicotinoids are harming a wide range of non-target beneficial species, especially vital pollinators like bees. Keep in mind that about 90 per cent of flowering plants, including flowering food crops, need pollinators like bees to reproduce.

Further, according to the BBC, the task force argues that the harm also extends well beyond non-target pollinators.

Neonicotinoids are residual in the ecosystems they're applied on — aerial spraying is often used. They're "poisoning the air, earth, and water" because they "accumulate in the soil and leach into water, and pose a significant problem for earthworms, freshwater snails, butterflies and birds."

The task force says that non-target species are also at risk from neonicotinoids because they're systemic, meaning they're absorbed into every cell of the plants they're used on.

It's the systemic nature of these pesticides that also accounts for one of the main reasons their full impact has not been recognized until now, says the task force. The classic ways of measuring to assess the toxicity of a pesticide "are not effective for these systemic varieties and conceal their true impact."

As bad, if not worse, neonicotinoids are also being used prophylactically. Seeds are coated with them so that plants mature with a built-in ability to kill pests.

"It is a bit like taking antibiotics to avoid getting ill," said Professor Goulson of the University of Sussex in the BBC article. He's one of the 29 scientists involved in the research. "The more they are used, the stronger the selective pressure you place on pest insects to become resistant to them. Using them (neonicotinoids) as prophylactics is absolute madness in that sense."

To me, what's really galling in all this is that a history of harm from these pesticides on non-targets, such as bees, goes back years.

In 2008, for instance, Germany revoked registration for one type of neonicotinoid on seed corn after an incident involving it killed millions of nearby honeybees.

A French study published more than two years ago in Science laid out irrefutable evidence in early 2012 that the "nonlethal" exposure of honeybees to these pesticides was causing homing failure at rates so high it could put "a colony at risk of collapse."

According to that study, one of the insecticides in the neonicotinoid group — thiamethoxam — produced a literal intoxication that impaired bees' ability to return to their colony.

So what are we waiting for, Canada?

According to the CBC, most Canadian soy and corn crops start from neonicotinoid-coated seeds. When Health Canada tested dead bees last spring it found neonicotinoid on 70 per cent of them. We don't even know which bedding plants we buy at retail outlets contain neonicotinoids (samples collected from 18 cities across North America show 51 per cent of plants tested positive for the pesticides).

Here in B.C. alone, we have more than 450 species of bees. One of them got trapped on our hot windowsill last summer. After gently placing it outside, the poor little dehydrated bee looked so stunned I placed a small piece of peach next to it and drizzled it with honey. Within seconds, the bee was feeding hungrily. After a while, it lifted off in a circling flypast I could only imagine to be a salute of gratitude

In my world, every little bee counts. But if we keep going like we are, I reckon the next not-so-mysterious colony collapse may well be our own.

Glenda Bartosh is an award-winning journalist who urges you to learn more about bees at these excellent sites: Simon Fraser University's Elle Lab and University of British Columbia's E-Fauna Photo Gallery.