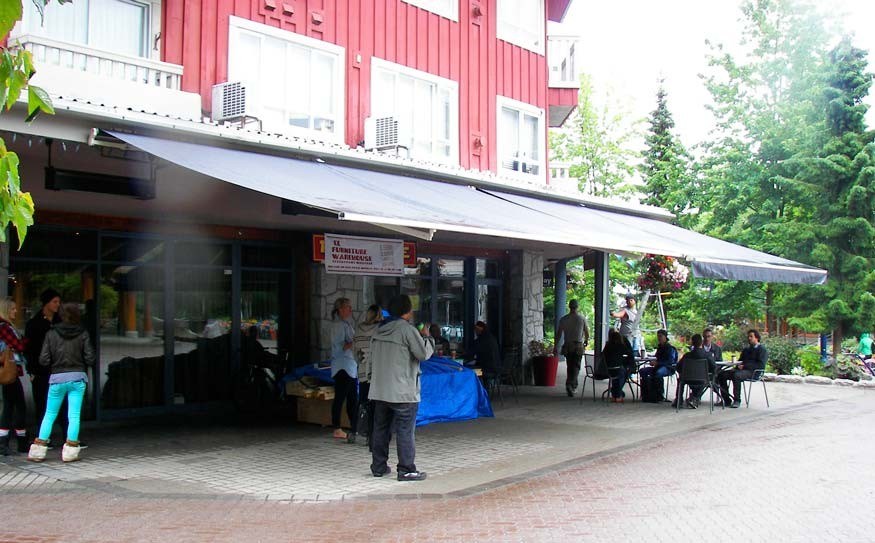 The $4.95 menu phenomenon is coming to Whistler.

The folks behind the Famous Warehouse, Moose Vancouver, The Factory and The Dime on Commercial Drive are bringing their high volume concept to the village in the location left vacant by Uli's Flipside Restaurant.

The new Whistler restaurant will open next month in the space off Main Street. Uli's closed for the shoulder season and reported at the time that it would reopen at the end of April.

The new outlet, being called El Furniture Warehouse, had a job fair on July 23. Leffelaar was there along with the group's head chef, Matt Evans and recently hired chef Fred Cote along with a host of other company and restaurant managers. While work was being done on the patio to fill restaurant positions, there was also renovation work happening inside the building.

Tweter says if all goes well they hope to start operating the restaurant early in August.

In addition to the list of well-known Whistler athletes who have signed on as part owners, the story here is the pricing.

"The value that you are getting for $4.95 is unbelievable," says Tweter.

The market he's targeting is the hard working employees of Whistler who are looking for value.

"We aren't offering unique product," says Tweter. "There's so many restaurants in and around the village that offer a very similar menu and a similar drink list so we really encourage the uniqueness of our spaces and that starts with the people that are working them."

The hiring process becomes key because Tweter says they are looking for servers, bartenders, kitchen staff and managers with personality.

"We really encourage them to keep their personality and their uniqueness and have that be what sells our product," says Tweter.

He says the goal in Whistler is to feed the people who are working at the high-end restaurants and give them a place they can afford to eat at when they want to eat out.

The menu includes starters like poutine, Whistler's favourite dish according to Best of Whistler voters, for $4.95 and entrees like braised beef spaghetti for $4.95. The salad offerings of Caesar salad, green salad and Union Street noodle salad are all $4.95. Baja fish taco, nachos for one, burgers, sandwiches and mac and cheese are all, you guessed it, $4.95. Oh, and fried apple pie after dinner: $4.95.

According to Evans, he brings his ingredients in from as close he can get it and because his restaurants are high volume eateries he says he gets his Abbotsford raised chicken at a great price. Same with the produce he buys from green houses in the Fraser Valley.

The new Whistler restaurant will deviate from the rigid $4.95 a few days out of the week. Monday is slated to be the all you can eat pasta day for $6.95 and Taco Tuesday will feature all you can eat tacos for $6.95. Wednesday is wing day with 15-cent wings all day.

This pricing scheme compares to the Flipside, which served what it described as value-oriented food, at prices that maxed out at $28.

While all the other restaurants in the chain are lunch and dinner outlets, El Furniture Warehouse in Whistler will also add breakfast to the mix.

Operations manager Cara Ball says once the hiring is complete the space will employ between 70 and 80 people in the 260 seat restaurant.