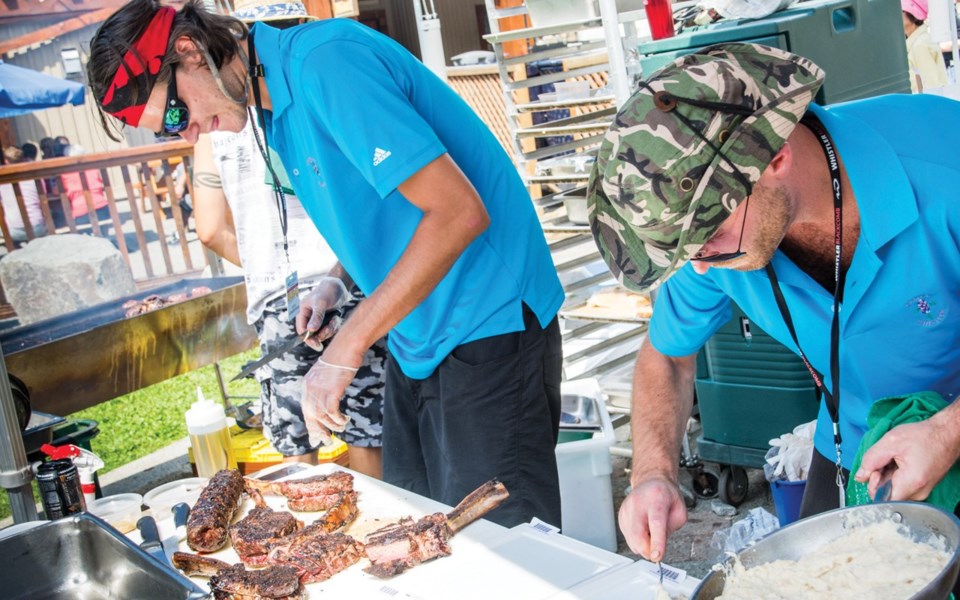 LICENSE TO GRILL Organizers of this year's Bulleit Bourbon Canadian National BBQ Championships are hoping to entice locals to try their hand at competitive cooking at Saturday's "I've Got the Meat for That" open cook-off and wine pairing. Photo submitted

When the Canadian National BBQ Championships launched at the start of the millennium, suffice it to say that Whistler's event calendar wasn't quite as robust as it is today.

"When we started this 18 years ago, we were the only gig in town," explained Josh Kearns, GM of Dusty's Bar, the Creekside host of the three-day event, slated for Aug. 3 to 5. "Now there's a lot of stuff going on and we're competing against a lot more, obviously."

That's what led to the creation of the weekend's newest competition, the first annual "I've Got a Meat for That" open cook-off and wine pairing, set for Saturday at 2 p.m. Kearns said the competition combined two past events, the Cork & Pork wine pairing and King of the Grill, as a way to entice locals to try their hand (and tongs) at competitive grilling.

"It's basically an open cook-off, so you don't have to be able to cook pulled pork; you can cook whatever you want, anything you're good at, but you're pairing it with wine," he noted.

Participants will have to match the meat of their choice with a wine from Jackson Triggs, and local sommeliers will determine the best pairing.

While the championships still tend to draw plenty of hungry attendees from near and far with its usual slate of bottomless barbecue buffets, live music and food samplings, Kearns said, in recent years, fewer locals have taken part in the weekend's competitive events.

"We opened up the other categories on Saturday, with the (Backyard Burger Championship) and the King of the Grill, and from there, there's been a ton of local (teams)—from Vancouver, Squamish and Whistler—that basically competed every year. Eighteen years later, we've seen that decline a little bit," Kearns explained, who did note there will be six local teams competing on Sunday this year. "Now there's a whole new generation of people living in Whistler and around the corridor, so we're trying to reinvigorate that concept ... We realized that it's been a long time since we've gone back to our roots and re-educated people on the whole competitive cooking thing."

Cooks, amateur or otherwise, will have plenty of opportunities to battle it out besides the wine pairing event; Saturday also sees the return of the Backyard Burger Championship at 1 p.m., and the Canadian International Chili Championship at 3 p.m.On Sunday, seasoned cooks from all over North America will compete for the honour of Canadian Grand Champion, an $8,000 prize, and an automatic entry to the Jack Daniel's World Championship Invitational Barbecue in Tennessee. Competitors will whip up their best pork butt, with judging at 11 a.m., beef brisket (12 p.m.), chicken (1 p.m.) and ribs (2 p.m.).

"We're definitely one of the more premier events for the Pacific Northwest," Kearns said of Sunday's competitions. Due to popular demand, Dusty's has added a second all-you-can-eat barbecue buffet this year, with seating from 6 to 8:30 p.m. on Friday. Saturday's buffet is also scheduled for 6 to 8:30 p.m., and each dinner will run you $39, which includes smoked brisket, Kansas City-style smoked chicken, pulled pork, smoked ribs, and all the fixings.

A new addition to the buffet this year will be the Bulleit Bourbon VIP booth, a licensed area on Dusty's patio that will feature a mini-bar serving premier smoke-style cocktails and a chef handing out bites from a mini-smoker onsite.

On the music side of things, beloved local Zeppelin cover band Whole Lotta Led will be pumping out the classics from 10 p.m. to 1 a.m. on Friday, while Whistler psych-rock outfit Lazy Ghost hits the Dusty's stage at the same time on Saturday night. Then, on Sunday, Monty Biggins' Little Biggs Band will be singing the blues from 6:30 to 10 p.m.—necessary after a weekend of meat-based overindulgence. For the full schedule, and tickets, visit whistlerblackcomb.com/events.