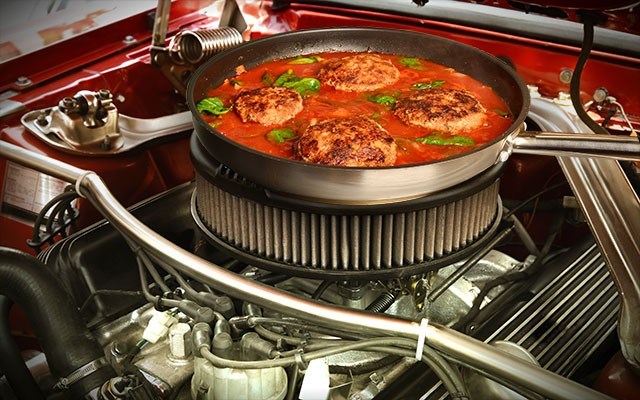 Only those on a desert island with no Internet capability the past week or so were lucky enough to miss the Ted Cruz spectacle of cooking bacon "Texas style" by wrapping it around the barrel of a machine gun.

This presidential candidate brought yet a new level of sophistication to the Republican nomination show, posting his "cooking" video, and I use the term loosely, on the Republican website IJReview.

In it Mr. Cruz starts off with a down-home welcome: "On weekends, there are few things I enjoy more than breakfast with the family... Of course in Texas we cook bacon differently than most folks..."

The video goes on to show someone, presumably Ted or his handlers, slapping a couple of packages of bacon into a shopping cart at a grocery store, then wrapping the barrel of his machine gun with a couple of strips of side bacon he covers in foil. After emptying a clip and a few more rounds into a target, which, unexpectedly, does not have a Democrat painted on it, he stops to let the video camera pick up the "grease comin' down."

Mr. Cruz then unwraps the foil and takes a white plastic fork to dig into the cooked bacon still wrapped around the barrel. With a squinty-eyed grin he pronounces, "Mmm-mmm — machine-gun bacon!" Surely they will serve it every morning to him and his dear family in the White House after he's elected.

Not that his is the only new Republican entertainment. Senator Lindsey Graham's video, How to Destroy your Cellphone, also on IJReview, has him whacking the dreaded phone in two with a meat cleaver, whipping it round in a blender and melting it in a toaster oven with buns. Mr. Lindsey also throws in a few sporting moments, with a baseball bat and a golf club. These images must have struck more of a common nerve with America's literati, or at least appealed to their true appetites, for Mr. Graham's video was outpacing Ted's, two million hits to 600,000.

So much for the lay of the land in U.S. politics and the usefulness of food in same. A chicken in every pot, and all that.

We can, however, take some comfort in the truth of it all. A commentator on CBC recently reported that the temperature of the barrel of an M116 rifle, which you can see online today, will indeed reach a temperature of 900 degrees if shot for 2.5 minutes. So why not cook some bacon for you and your hungry mates next time you're out shooting?

Which reminds me of the big trend a few years back, genuinely popular amongst hunters, fishers and other outdoorsy types — cooking up a meal on the engine block of whatever vehicle you happen to be travelling in.

It's funny, but no joke. Engine block cooking has spawned the likes of its own Wiki entry as well as a guide, just re-issued as e-book and paperback, by Chris Maynard and Bill Scheller called Manifold Destiny: The One! The Only! Guide to Cooking on Your Car Engine!

Some of the author's successful rolling dinner engagements include a pork tenderloin cooked under the hood of a Lincoln Town Car. Shrimp done to perfection on the engine of a '56 Cadillac in Germany while driving around the mayor of Dortmund and the Caddy's owner, a German Elvis impersonator. And then there was the Eggs-On-Cheese pie they cooked for Katie Couric and Al Roker on the Today show, just to name a few.

It all started, say Chris and Bill, after they'd bought some smoked meat (better known to Americans as pastrami) at Schwartz's, the Montreal deli famous for same. On the way home to Boston they lamented that their fragrantly hot deli treasure wouldn't be so hot by the time they reached their destination. Recalling stories of lonely truckers cooking wieners and beans on their truck engines, they bundled up the smoked meat into layers of tin foil, et voilà, an hour's drive later they enjoyed the first in a long line of delicious "manifold destinies."

A word of caution if you are about to give it a whirl: make sure you avoid blocking any air intakes, or you'll feel like a real blockhead!

As you can see, beautiful, flexible tin foil plays a critical role in all this unconventional cookery, so much so you'd think Reynolds had a share in the hoopla, including the 1980s pop trend right up there with big shoulder pads — cooking fresh fish in your dishwasher.

For this one, the species of choice here on the Wet Coast was always salmon. And I have to 'fess up that my husband really, really wanted to try it, but never did, mainly because we'd heard about failed attempts that left bits of fish stuck all over the insides of the dishwasher. To that point, fish glue, also called isinglass, is a traditional adhesive for good reason. Its use goes back to ancient Egypt, but it's still very popular with woodworkers and artists because it resists solvents, plus you can make it stick again by simply adding water. Ahem.

But don't let me scare you. Those fishy mistakes were no doubt due to two important things Bob Blumer, from The Surreal Gourmet show on the Food Network, warns about. One, do not, repeat, not, try cooking a whole fish. Two, make sure you wrap your salmon filets, or whatever, in two sheets of foil folded and refolded on the edges and pinched tightly to make a good seal. (Find his full recipe for dishwasher salmon with a nice tangy dill sauce at http://www.foodnetwork.com.)

And take heart. Given all our striving to be sustainable, there's good reason to think that dishwasher salmon, and, for that matter, cooking on your engine block might make a comeback. In both cases, you're already using precious energy to drive to your camping spot, or wash yesterday's dirty dishes, so why not have it do double duty? Getting a good hot meal out of it, too, is a bonus.

As for the other method, sorry, but I just can't think of another application for that ridiculous machine gun you could double up on to justify cooking your bacon. Well, maybe one...

Glenda Bartosh is an award-winning journalist who'll double up and parboil her veggies in the salted pasta water, then take them out, before adding the pasta in.