Math adds up for new pizzeria 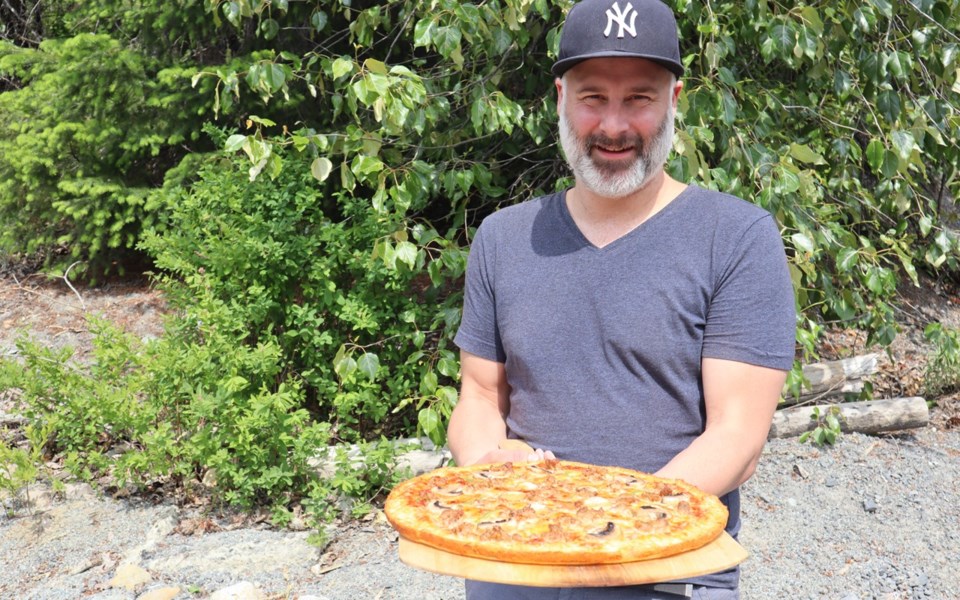 proper function Leigh Scott shows off a pizza from Functional Pie Pizzeria, which is set to open in Function Junction next month. PHOTO by dan falloon

Leigh Scott's dream has long been to open a pizzeria in Function Junction.

And after years of biding his time, getting his ducks in a row, deciding he didn't want to open up in Whistler Village and resisting the temptation to start up on Vancouver Island, the stars seemed to align recently.

"I've been wanting this for many years. When the Lift Coffee Company was done, I was looking at that building, it just wasn't time. I needed more time," he said of the space now occupied by 200 Degrees Bakery. "I continued making pizza at home."

More recently, Scott had been in contact with realtor Drew Meredith looking into a spot in the neighbourhood and he was told, "everyone's looking to put their stick in the ground down in Function."

Over beers at Coast Mountain, Scott asked his contacts in the community to keep an eye open for any newly leasable storefronts in the neighbourhood. Two weeks later, one of them sent word that there was a space at 111-1085 Millar Creek Rd. and he jumped at the opportunity to bring Functional Pie Pizzeria into being.

"It's kicking things off a little bit sooner than I expected, so putting a build together has been a bit of a scramble. It's a fun ride, but it's got its moments, for sure," Scott said.

For the past three months, Scott had been working with BackCountry Pizza in Pemberton under new owner Riel Cairns, which gave him the chance to "litmus test (his) pizza out into the world." Before that, Scott worked at Vancouver's Campagnolo under chef Robert Belcham as he sought to soak in as much as he could about the industry before he set out on his own.

"It was a chance to not just do pizza, but to be educated in the kitchen. I had only been a server at the Fairmont for 12 years," he said. "I stayed on at Campagnolo because I was loving everything I was learning, but when Riel said 'I'm opening a pizza place in Pemberton,' I had to jump on it because I knew I was going to be opening my own and this was going to be an awesome opportunity to learn."

The experience seems to have served Scott well, as he has experimented and drawn ideas from across the globe. In a collision of worlds, Scott described his pies as a cross between the thin-crust New York style but cooked as though it's a Sicilian pan pizza. The third inspiration is from Detroit, which extends cheesy goodness all the way to the crust in such a way that it caramelizes, while the sauce will crown the pizza, atop even the cheese.

Though he's set to open up his own storefront soon, Scott still has dreams of what he hopes to do with the restaurant. The current location will allow for only 10 seats and he hopes to eventually allow for table service with the pizzas presented in cast-iron pans. Scott will also hope to develop a patio, but that will likely have to wait until 2019. Until then, Functional Pie will serve primarily as a takeout place, covering the lunch rush in a by-the-slice capacity.

"I expect people (will be) coming over when they're grabbing supplies at Windsor Plywood and then just shooting out the door," he said.

However, Scott plans to stay open later, until 8 p.m. on weeknights—and later on Fridays than other food options in the neighbourhood, effectively covering dinner as well.

"I'm curious to see what's going to happen being open until 8 o'clock at night, especially if it's a cold, dark October evening," Scott said. "But we'll commit to ... being there if people want us."

Scott plans to set Functional Pie apart from some other pizzerias by using full-fat mozzarella and fresh pineapple while offering premium toppings like fennel sausage, capicola and "the absolute best pepperoni (he has) ever seen on the market."

Functional Pie is set to open next month. To keep up to date, visit www.functionalpie.ca.