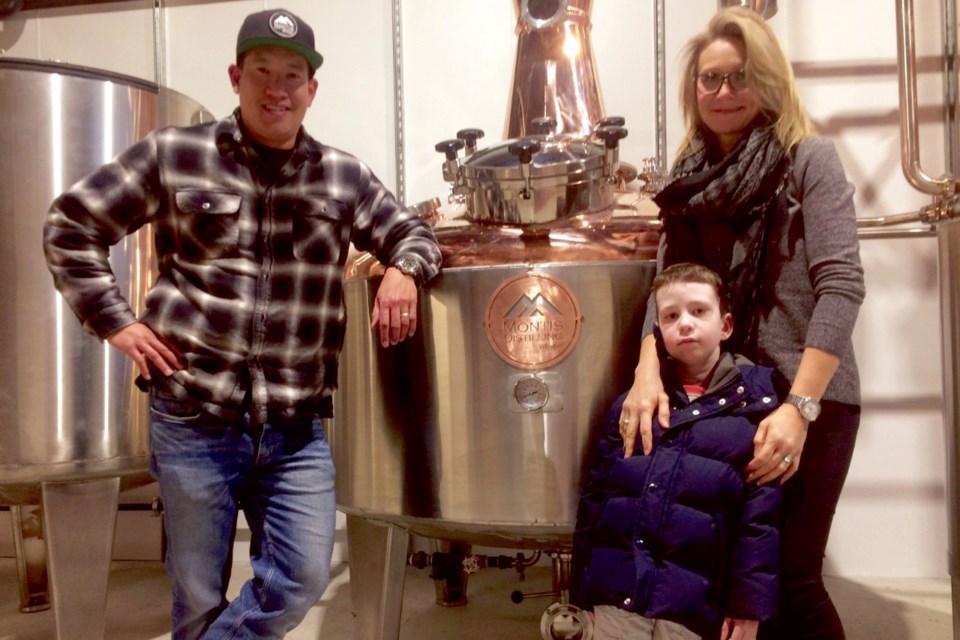 IN THE SPIRIT Kwang Chen, left, with wife Bryanna and son Colin at the site of their new distillery, Montis Distilling, in Function Junction. Photo by Brandon Barrett

For Kwang Chen, distillation has evolved from a personal hobby to a career passion.

"It's something I've always enjoyed doing and has always been a part of my life," says Chen. "Cooking and making consumables for people has always been interesting for me."

Chen has parlayed his pastime into Montis Distilling, which is set to open in the coming weeks at the former location of Altitude Computers in Function Junction. Largely self-taught, Chen is teaming up with his wife, Bryanna, to launch the very first distillery based in Whistler.

"The community's really embraced the local breweries in the area, and we just saw a really great opportunity," says Bryanna. "There isn't a local distillery in Whistler specifically, so we just saw an opportunity with the space, and it just seemed like the right timing."

Originally from the U.S., Chen first moved to Whistler about seven years ago, splitting his time between the resort and Vancouver, where he worked. Today, the Chens live in Cheakamus Crossing full time, and have launched headlong into their new venture.

Armed with a craft licence, Montis Distilling ("montis" is Latin for "mountain") will use 100-per-cent B.C. grain for its roster of spirits, as well as a "wide variety" of botanicals that will be foraged from the Whistler area, Chen said.

"We definitely want to capture the mountain vibe, the essence of the mountains and this environment," he added.

To start with, Montis will offer locally produced vodka and gin—a personal favourite of Chen's, who will strive to imbue the juniper-based spirit with a taste of the mountains.

"For me, I like a really heavy, pine-flavoured gin—almost like eating-a-tree gin," he explained. "I know it's something that's a little off-putting for some people because it's pretty aggressive, so we'll find something that will probably lean towards that but will be a little bit more mellow. I think that's what we want to reflect, just being in the forest and around the trees and the air. I think it's really good to have that kind of flavour profile."

Montis will also offer whiskey, although it will take some time for the barrel-aging to take effect before that spirit will hit the shelves. Chen said he's already thinking of different seasonal spirits he wants to produce, like an apple-spiced whiskey that would be perfect for the cold, winter months.

Initially at least, Chen said his primary target will be the restaurant and bar sector.

"Just talking to a lot of them, they're saying that, because we have so many visitors coming to Whistler and eating local is so trendy at this point, a lot of their patrons are asking for anything that is produced here in Whistler," he notes. "We're hoping we can take advantage of that and really be in that space. And then we'll take feedback from the bartenders to see what's selling, what makes sense and what their consumers want."

What's more is, because of the relatively small size of the distillery, Chen can adapt his spirits to consumers' wants and needs. "We're small and we're craft, so we're really agile and can adjust our product if they tell us they think something will sell," he adds.

Chen expects the distillery to open within the next eight weeks. He said the distillery will have a retail storefront where customers can buy spirits as well as a line of Montis-branded "swag," including T-shirts and hats.