Not just another pretty pumpkin patch 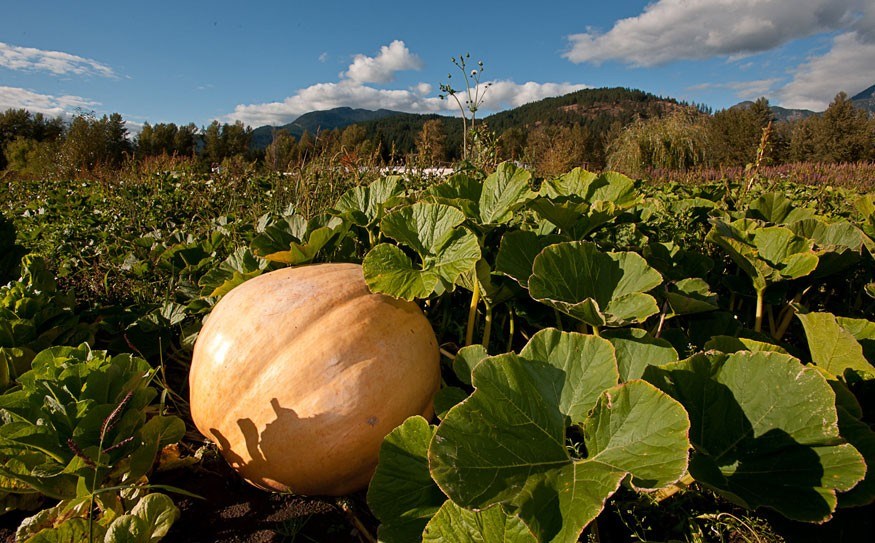 The frost is well and truly on the pumpkin, at least it is at the Sturdy's North Arm Farm just outside of Pemberton at the foot of even frostier Mount Currie.

But if you head up in the next while to pick out your own golden globe, good chance you'll be as amazed as I was at the selection of other farm-fresh veggies that can be had alongside the pumpkin picking. All this in light of Whistler Farmers' Market already shuttered for the season, although the good news is Vancouver's Winter Farmers' Market will launch November 3 in the Nat Bailey Stadium parking lot.

Other than dressing up as your real inner self, one of the most fun things about Halloween is picking out your own pumpkin. North Arm has more than 4,000 plants and a bunch of varieties, including New England sugar pumpkins (a little tough to carve but the absolute best for making pies) as well as ones better suited to the lantern side of things, like Racer, Rock Star (tall and skinny), and Polar Bear (big, round and white). The bottom line is you're bound to find one or a half dozen full of character that suit you and the kids to a "T".

You won't have to haul your pay-by-the-pound pumpkin back to the barn to get it weighed as you can take a horse drawn wagon through the patch and back. And if you need to warm up, cozy up to the fire pit before heading back into the barn for a bowl of The Pony's crazy-good chili or whatever's on offer and checking out the beautiful fresh farm veggies.

The story I love most about North Arm Farm is how Jordan and Trish bought it in the first place.

Jordan first moved to the area in 1989 to take a job as a pro ski patroller on Blackcomb; his wife, Trish, eventually moved up and worked at Blackcomb, too. But when they started looking around for a permanent home together they discovered that a 55-acre farm — the one they eventually bought — complete with a mobile home, which Jordan had been renting, a barn, a cabin and a tractor cost the same as an old 1960s Gothic arch in Emerald Estates at Whistler.

"It just seemed like a better deal," Jordan says.

The original plan was to do direct farm sales after a neighbour, who sold his farm and bought a Winnebago, came by to talk to Jordan.

"I should have paid a little more attention to him, but he said, I've never had a holiday in the summer in my whole life and so the wife and I are taking the Winnebago and driving to Newfoundland — that was the one piece I did miss," Jordan says.

"All I focused on was he said I've been selling corn, carrots and potatoes on the side of the road for a long time and people are going to miss me, so you should think about doing it."

Before hitting road, the neighbour came by and helped Jordan plant his first acre of corn. Signage was a spray-painted piece of plywood at the end of the driveway. People started pulling in, and Trish and Jordan never looked back.

Today, the farm has gone from sales of about $4,000 that first year to grossing well over half million dollars annually. As well, Jordan was selected by neighbours to put his hat in the ring for the mayor's job in Pemberton in 2005. He succeeded then and again for the two following terms.

As for going pesticide-free and, finally, certified organic a couple of years back, it was a no-brainer.

"I gave up spraying for insects — it just didn't make any sense. I haven't applied an insecticide on this property in 15 years," he says. "I live in the middle of my farm. I have two daughters (Emma and Thea) and two dogs growing up on the farm, and everybody is everywhere. To have an operation where you have to say, oh, don't go there today!, is not acceptable."

But back to those October farm-fresh veggies that can be had on your visit to the pumpkin patch: One of the biggest surprises for me were the gorgeous radishes still available. I normally think of radishes as one of the first crops that pop up in spring or early summer and usually they are, but Jordan has learned that they do well if he seeds another round in August, and so fresh radishes it is for your October dining pleasure.

Take your pick from the lovely French breakfast radishes; gaily coloured Easter egg radishes, and what and I took home, the wonderful Shunkyo radish — so tasty and crisp I kept dipping the end in salt and gobbling it down. You don't have to eat your radishes raw — try searing medallions of them or mixing slices of them into a stir-fry.

Then there's yummy German butter potatoes; purple-top white globe turnips (grate them and enjoy them raw in a salad or pan-fry the gratings with a bit of garlic and serve with lots of butter); yummy black kale (delicious seared in a hot pan); huge bouquets of fresh parsley; rutabagas; leeks and scallions; Cippollini onions (so sweet and fragrant they're fabulous to use any which way); and some of the most beautiful — and tastiest — chard I've ever enjoyed. Try it "Jordan" style: Gently steam the chard in a pan; remove it; then slice up some summer squash and garlic and fry them in butter in the same pan until they're nicely golden and caramelized. Put the cooked chard back in the pan for just a minute or two until it settles down, then flip the whole thing onto a platter so the chard is on the bottom and the other veggies on top. Season with lemon, salt and pepper then slice it up like a frittata and enjoy.

North Arm Farm is open for your pumpkin and other produce-picking pleasure until October's end, then again for two weeks before Christmas when there will be lots of beets, carrots, turnips, rutabagas, those famous Pemberton potatoes and more right from the root house.

Glenda Bartosh is an award-winning journalist who was slated to come into this world on Halloween but arrived two days earlier.