If approved, genetically modified apples could hit Canadian shelves by end of year
May 14, 2014 10:00 PM By: Brandon Barrett 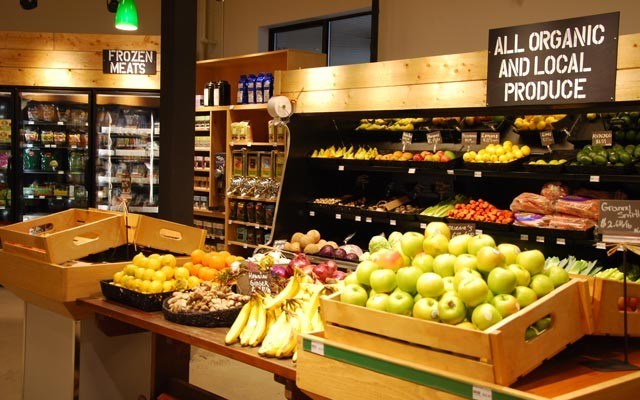 NO TO GMO Olives Community Market in Function Junction joins 19 other B.C. grocers in refusing to sell genetically modified apples if they are approved. Photo by Tessa Sweeney

The decision, according to storeowner Angela Perzow, was a no brainer.

"I just don't sell (genetically modified organisms) in my store," Perzow says of the all-organic market that's been operating for a year and a half. "I don't even consider the option to buy non-organic vegetables and fruit, so this wasn't an issue for me."

Olives join 19 other grocers across B.C. who've committed to not purchasing or selling the "Arctic Apple," which is genetically modified not to brown as quickly as other commercially available crops. The province-wide campaign to raise awareness of the modified apple was spearheaded by the Health Action Network Society (HANS).

Awaiting government approval that could see it hit Canadian store shelves as early as this year, the Arctic Apple was designed by Okanagan Specialty Fruit to not brown for 15 to 18 days after being cut, according to HANS. The B.C.-based company, which has produced apples with the non-browning trait in both Golden Delicious and Granny Smith varieties, "silences" the browning gene by inserting new genetic material into the apple's DNA, including a plant virus and two different bacteria. According to HANS, the Arctic Apple will appear fresh even when it's not.

"Wow, doesn't that sound appetizing to you?" Perzow says sarcastically. "Who would even want to eat something that was injected with stuff like that?"

The Burnaby-based Health Action Network Society has also expressed some concerns with what they feel will be a lack of information about the GM apples if they make it to stores.

"The company says that if approved, the apples will be labelled with the company logo. We believe this will cause confusion for customers, because it is extremely unlikely a label will alert consumers to the fact that the apple is genetically modified," says HANS director of operations Michael Volker in a release.

The BC Fruit Growers' Association (BCFGA) has officially opposed the GM apple, concerned that contamination from the modified fruit would threaten the future of organic apples and effectively cripple the B.C. apple export market. The association joins 69 per cent of Canadians polled in a 2012 survey opposing genetically modified apples.

Stateside, meanwhile, the U.S. Department of Agriculture has allowed Okanagan to produce the apples in test plots in the states of New York and Washington. Interestingly, it's the company's fellow apple growers — including the U.S. Apple Association and the BCFGA — which have voiced the loudest opposition to the Arctic Apple, with the Northwest Horticultural Council comparing the fruit to "an invasive pest species" in a letter to the USDA.

And despite Whistler's active and health conscious populace, Perzow feels like the resort still lags behind cities like Vancouver in terms of its options for organic food.

"I think we're behind," she says. "People are shopping at organic grocery stores all over Vancouver. Can you believe it took until now to open one up (in Whistler)?"