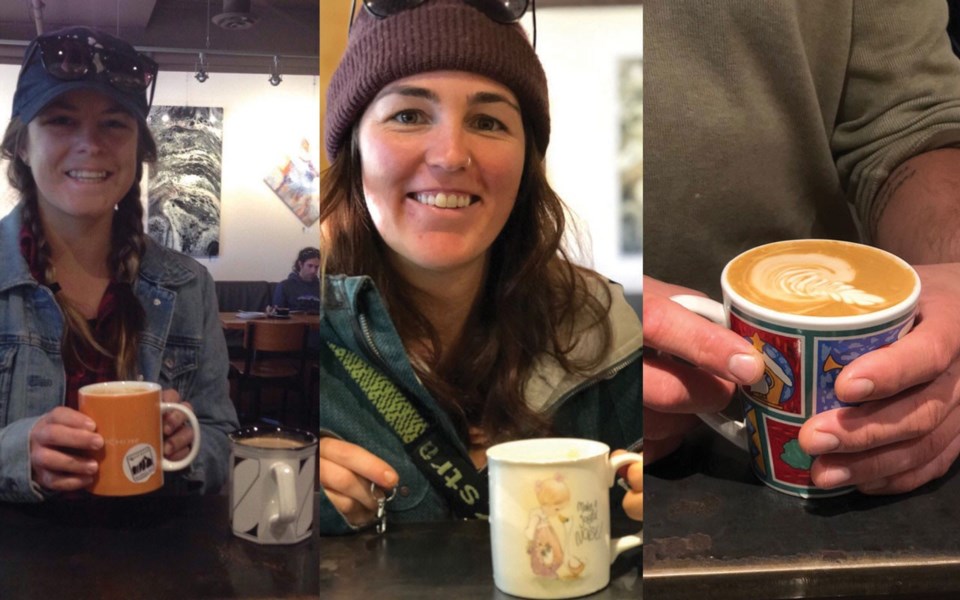 REUSE IT OR LOSE IT A photo montage of Mount Currie Coffee Co. customers taking advantage of the shop's reusable mugs. Photo submitted

With just days until Whistler's municipal election, several of the 20 candidates vying for a spot on council have turned their focus to single-use disposable items. Much of the conversation has centred, rightly so, on plastics. But there's no denying that disposable, paper coffee cups—which Canadians consume in the literal billions every year—need to be a part of the conversation as well.

"Obviously the 'straw wars' have brought a lot of attention to single-use items, but as a coffee-shop owner, I see tons of paper cups go out every day," said Chris Ankeny, owner of Mount Currie Coffee Co. "It's something that's a struggle because you don't want to lose sales by any means, but at the same time you want to be part of the solution, not part of the problem."

Mount Currie Coffee Co,. like many other local coffee shops, has been working towards changing consumers' habits by offering reusable coffee cups for sale. More recently, however, he was approached by Frances Dickinson, organizer of Pemberton's reusable bag program, Boomerang Bags, about handing out lightly used, reusable mugs to customers free of charge at both its Whistler and Pemberton locations—a small effort to get coffee drinkers to start thinking about the waste they produce.

"I just think it gives people that option," Dickinson explained. "What we're trying to highlight here as well is that, as much as we want the Boomerang Bags to come back, it is more about developing a conversation around single-use, disposable items. If you really want to keep that cup, none of them are terribly special."

Since getting Mount Currie Coffee Co. onboard, Dickinson said other Pemberton shops have joined the initiative, including Stay Wild Natural Health and Grimms Deli. Having donated roughly 100 reusable mugs so far, Dickinson knows it will only put a small dent in the wider problem of disposable items, but she's hopeful it sparks a community conversation nonetheless.

"I often feel like people want to do these things, they just don't have the time or the energy. If it's just about one other person coming in and helping them out, then we can move forward to doing it," she said. "I personally don't know if this is my mission, but I'm enjoying seeing how this town of Pemberton is embracing it all. I feel like the message is getting passed along."

Canadians drink an estimated 14 billion cups of coffee a year, and just over a third of those are consumed in single-use cups. That represents roughly 35,000 tonnes of paper, made from more than 70,000 tonnes of raw wood. That's part of the reason why Ankeny wanted his shop to take part in the #BringYourOwnMug movement on Oct. 1, International Coffee Day.

Organized by Silver Chef, Canada's leading hospitality equipment funding partner, the initiative saw the company donate takeout coffee mugs to five participating cafés from B.C. to Ontario. Consumers had the option of taking these free, ceramic mugs home before returning them later, or they can trade them for old mugs they have lying around at home.

"This initiative ... is inspired by the circular economy, and designed to be self-sustaining beyond International Coffee Day, with consumers returning or replacing the ceramic cup they take," said Robert Phelps, president of Silver Chef Canada, in a release. "As a proud B.C. Corporation, Silver Chef knows that reducing our environmental footprint requires collective action and we're delighted with the support we've received from Canada's coffee community for this initiative, and invite others to join us too."