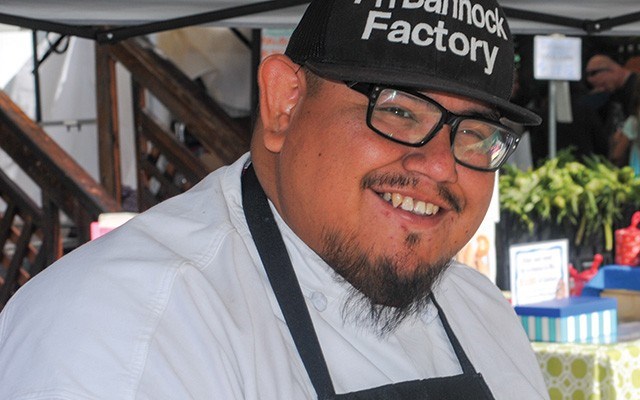 cultural ambassador Squamish Nation member Paul Natrall will get to realize his longheld dream of cooking Indigenous food for the masses with his new food truck, Mr. Bannock. PHOTO submitted

It was in the fall of 2012 when Paul Natrall began to realize he could not only hang with some of the brightest stars of the culinary world, but actually outshine them. "It made me think of what I can do better," said the West Vancouver resident.

Natrall was part of Canada's Aboriginal Culinary Team that travelled to Erfurt, Germany to compete in the 2012 World Culinary Olympics, an experience that emboldened him to realize a dream he had since culinary school: to promote and preserve his culture through food.

The Squamish Nation member will soon get that chance after announcing last week that he will be launching Vancouver's first Indigenous food truck, Mr. Bannock.

"Not a lot of people are aware of what (Indigenous cuisine) is," Natrall said. "I believe everybody's behind on it. But that's because our culture was taken away... and some of those traditions didn't get passed down. Just through talking to elders and other Aboriginals in my community, we want to bring that back. It's very exciting."

Natrall has been cooking for the past decade, but it wasn't until he took an Aboriginal specialty culinary program at Vancouver Community College in 2010 that he really began to think about cooking Indigenous food for the masses.

"They taught us 10 months of classic French cuisine, and in the last two months we narrowed it down and did Aboriginal specialties. Since then, I've been at it, trying to promote Indigenous cuisine and showcasing at lots of competitions locally," he recalled.

Along with the World Culinary Olympics, Natrall has turned plenty of heads in Vancouver's competitive cooking scene with his distinctly contemporary take on Indigenous cuisine. Despite not having the built-in fanbase that most of his fellow competitors at brick-and-mortar restaurants enjoy, Natrall still managed to take home third place at this summer's Vancouver Taco Fest with his bannock taco.

It's his ability to merge traditional cooking methods with the latest food trends that makes Natrall's venture so appealing. He plans to do a rotating bannock pizza — his smoked salmon version sounds especially scrumptious — that feature common First Nations ingredients like bison, elk and venison, along with an all-Canadian bannock beef burger.

"Stone baking and clay baking, that's something that people have done for generations. I want to showcase that. It gives us different textures, different flavours."

So much of First Nations' culture was violently ripped away from Indigenous communities during Canada's dark legacy of residential schools — and food was no exception. For Natrall, that makes his food-truck venture that much more important.

"Right now is a huge time for reconciliation, whether it's good or bad, depending on who you're talking to," he said. "We've lost so much of our culture. Special ceremonies have had to stop, and with that means cooking as well."

As someone who has had a tough road to launching his food truck, Natrall is well aware of the need to be there for the next wave of Indigenous entrepreneurs.

"That's the best I can do," he said. "I volunteer a lot of time to my kids' sports; I'm the co-manager of my son's field lacrosse team. So just being there for the next generation if they're having issues goes a long way."