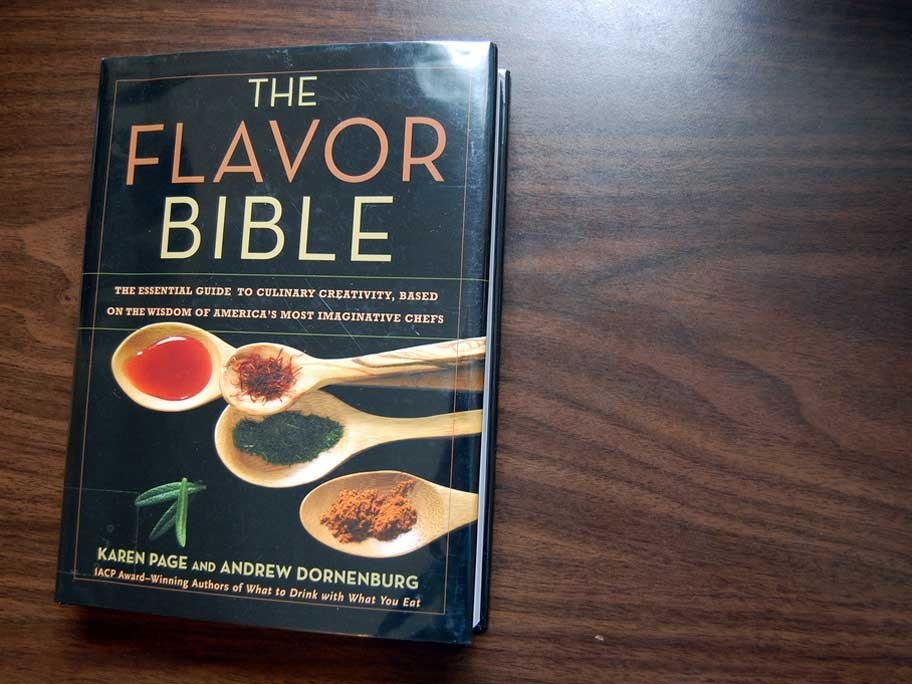 The Flavor Bible An amazing resource for the seasoned chef looking to try new flavour combinations. Photo by Mark Larson, <a href="http://flickr.com/">Flickr.com</a>

So let's all turn off our iSomethings, sink into a big, comfy chair, and curl up beside a fireplace —metaphoric or real — with a darn good book.

What better choice than one about that most typical and timely of topics for the holiday season, the one that's right up there with Santa, all the twinkly lights and the birth of a baby named Jesus to push back the darkness — food.

From my "best-to-read" list, I've got more than a few suggestions, whether it's a good food book for giving, or one that will draw you into your own holiday bliss, or prove itself to be a reliable friend year after year.

But first, more than a few eclectic book buffs from this neck of the woods have also generously served up their own best food-book bets. All come with a nice glass of 'nog on the side, so enjoy...

From Whistler's latest Citizen of the Year, Joan Richoz — long-time local librarian and arts champion, and mother of another creative force in her own right, her daughter, Marika.

Marika runs her own underground restaurant out of her house in Vancouver, The Birds Nest, and it's her we have to thank for this book suggestion, since she recommended it to her mom: The Flavour Bible: The Essential Guide to Culinary Creativity, Based on the Wisdom of America's Most Imaginative Chefs by Karen Page and Andrew Domenburg.

This is not a cookbook per se, notes Joan, as it lists of thousands of ingredients, which are organized alphabetically and cross-referenced. Think of it more as an amazing resource (one eight years in the making) for the seasoned chef looking to try — or avoid — new flavour combinations. For instance, The Flavour Bible recommends that pomegranate seeds go best with salads, especially cucumber, fruit and green salads, as well as cardamom, chicken, cinnamon, ginger, grapefruit, and more. Mix it up, dig in, have fun — now that's my kind of template.

Then from Whistler's best-read columnist, Pique's G. D. Maxwell, we have Irma Rombauer's Joy of Cooking.

"I know it's prosaic and, truth be told, it isn't my go-to book for recipes by a long shot, but I learned more about the science and art of cooking from Joy than any other cookbook I've ever read," he says. "From setting up a kitchen to proper technique for cooking just about anything, Joy can't be beat. Anyone who wants to learn how to cook would have to search pretty far to find a better text."

Sounds like the perfect gift for that liftee or line cook if this is her or his first winter away from home.

You might also find Max in the easy chair with Mark Bittman's How to Cook Everything Vegetarian (great for making the transition from meat-eater to meatless feeder without falling into unimaginative ruts); Zanini De Vita's Encyclopedia of Pasta (really drills down into the esoterica of the universal comfort food); or Tina Anderson and Sarah Pinneo's The Ski House Cookbook, for every skier, and weekend warrior. The recipes are graded as green circles (easiest), blue squares and black diamonds. If you want to ski more and cook less — hint: dust off the crock pot — this one's for you.

As for that other illustrious Pique-er, our fearless publisher Bob Barnett, his I've-always-wanted-to-read-it-and-just-might-have-time-over-the-holidays pick is Empires of Food; Feast, Famine and the Rise and Fall of Civilizations by Evan Fraser and Andrew Rimas.

A little light reading, as he says, with more than a few lessons for us today. To whit, why is the once-thriving Fertile Crescent no longer fertile, and how might that compare to today's overworked breadbaskets and rice bowls in the United States and China.

Bob's other suggestion — one he has read — is The Coffee Trader, by David Liss. "It's a good piece of historical fiction with more double-crosses than you can keep track of," he says.

Ophra Buckman, Whistler's mushroom lady, recommends The Soul of a Chef by Michael Ruhlman, a great-non fiction read about the hardest chef competition out there, while Sarah Macmillan at Rootdown Organics in Pemberton has fallen for her new hero, Hugh Fearnley-Whittingstall, in a big way.

"I hope to be able to slip into the couch (I have a new cozy one that likes to envelope you like a big warm hug), next to the fireplace and get properly stuck into Hugh's River Cottage Meat Book," Sarah says, adding apologies to our vegetarian readers.

"This wonderful book is actually a cookbook, but one with a difference. Besides being about, yes, well, meat, it's somewhat of an intellectual schooling and philosophical look at the act of buying, killing, cooking and eating meat." In fact, nearly half of the book is dedicated to understanding meat.

At the farm, they've been stealing recipes from it all season, it resonates with them so much. And here's a chapter that can resonate with all of us: The Consumer Holds the Key. Love it.

Given it's the holiday season, we can barely think of food without wine. So we took it to the top on this one and asked Anthony Gismondi for his best pick: Perfect Pairings: A Master Sommelier's Practical Advice for Partnering Wine with Food by Evan and Joyce Goldstein. It will make your best wine choice with anything you eat a no-brainer, explaining why everything works on your palate like it does.

As for my choices, it's tough to narrow it down to one, but I'm definitely going to find some time for The Art of Living by Joe Beef: A Cookbook of Sorts.

The authors, Frédéric Morin, David McMillan, and Allison Cunningham, have filled a hankering for something authentically Canadian and Canadienne with their three little restaurants in Montreal. But it's their newest eatery, Joe Beef, named for a guy in the 1800s that ran a bar in the neighbourhood where he kept a drunken bear, that's grabbed imaginations and inspired this book.

The Art of Living comes off as part cookbook, part history, part philosophical musing in a good Canadian way. Keyword: authentic, or is that authentique?

However you spell it, have the best Christmas ever, and don't forget to take an afternoon off to read.

Glenda Bartosh is an award-winning freelance writer who intends to read several books this holiday season.