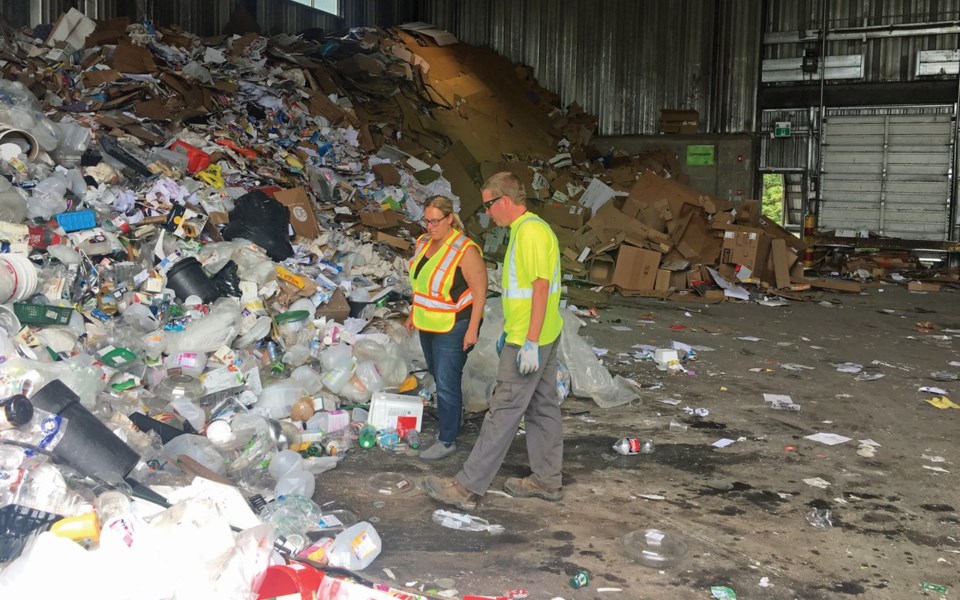 ONE MORNING'S WORTH A mountain of recyclable cardboard, paper and containers, including plastics, from just one morning of commercial recycling in Whistler dwarfs Denise Imbeau, manager for GFL Environmental (Carney's Waste Systems), and Dave Gillie, Whistler Transfer Station chargehand. Dave is one of about 30 people handling Whistler's waste every day, helping you get your garbage to the right place. Photo by Eddison Clayton

Plastic—it's everywhere, including lots of media lately given those huge containers of trash from Canada that was supposedly plastic recyclables being shipped back indignantly (and rightfully so) by the Philippines and Malaysia for us to deal with.

Then there's the ever-increasing kilometres of plastic congealed in our oceans like scary floating islands; the dead whales and birds filled with plastic trash. And now scientists are warning we humans are each ingesting at least 50,000 particles of plastic a year, health effects unknown.

Just when you think you've gotten away from it all, there it is again—neon-orange plastic bits on a remote trail in the middle of nowhere; a white plastic bottle cap on what seemed like an untouched beach on Haida Gwaii. Unpleasant, unwanted reminders of our post-modern selves and our intransigent weaknesses. I flinch each time I see them.

So what to do about all this plastic?

Even trying to resolve the seemingly flimsiest end of the problem—single-use plastic bags, which were patented in Sweden in 1965, when everyone thought they were wonderful—we're apparently paralyzed.

Vancouver—with its aspirations of being the greenest city on the planet by 2020 (good luck with that deadline)—is constantly chided for not being able to nuke plastic bags. Likewise Whistler, another hipster-ish Wet Coast community that prides itself in being green but, after more than a decade, is still dithering over them.

In the meantime, the UN reports we're using and, I'll add, largely discarding some 5 trillion single-use plastics bags every year, after year, after year—bags that can take up to a thousand years to break down. I probably don't need to remind you, but I will: these bags are mostly made from polyethylene, a by-product of oil, gas and coal production.

But, as Master Po would say, there is hope, Grasshopper.

The Guardian reports that California and Hawaii have introduced statewide bans on single-use plastic bags. Some 240 cities and counties across the U.S., Bangladesh, China, Israel, South Africa, Rwanda, and more, have all banned the bag. Closer to home, Squamish has banned plastic bags and straws, thanks to students speaking up about the issue. And most Horseshoe Bay businesses are ditching single-use plastic bags, too.

So what are you waiting for, Whistler?

Besides me, Denise Imbeau, general manager of GFL Environmental's operations in Sea to Sky, might be the happiest person around if we totally ditched plastic bags.

GFL Environmental, or Carney's, as some of us still call it, is responsible for waste management and recycling throughout the Sea to Sky, including the Squamish landfill; Whistler and Pemberton transfer stations/depots, where residents bring their waste for recycling; and Whistler's compost facility. Last year, Toronto-based GFL bought Carney's Waste Systems, which has been known for its excellence over the years, largely due to the integrity of founder Owen Carney. He started the company back in '65, ironically, the same year plastic bags were "invented."

However you call it—Carney's; GFL—Denise has her own reasons for sacking the plastic sacks, which often get mixed up in the recycle stream. "...Those (bags) are kind of evil because they gum up all of our equipment and machinery," she says.

As for the other plastics, the hard stuff, until we all swear off it, as yoga instructor Maeve Jones does for a month each year (see Nicola Jones' excellent feature on plastics: "Our plastic pipeline," Pique, Sept. 9, 2018), the best we can do is recycle it properly.

"It's easy to say there's something wrong with plastic," says Denise. "But the industry is looking after itself. What we need is for the people who are buying and using plastics to do their part."

According to the RMOW, in 2018, about 100 metric tonnes of plastics, including containers and plastic film like grocery bags, were recycled in Whistler. Like all of B.C.'s recycled plastics, it ended up baled and delivered to Merlin Plastics in Delta, where it's washed, sorted by grade and colour, and made into pellets for re-use.

But that still leaves the plastics that can't be recycled, plus we'll never know how much recyclable plastic is hidden in Whistler's unrecyclable garbage, all of which goes to Washington State.

Even in Whistler, as you can see from the photo above, recyclables alone are huge. Carney's picked up this mountain of them—including plastic and some oddballs, like a thermos and hoses—in just one morning from commercial outlets alone. Their trucks can fill this transfer station area several times a day.

As for those headline-making shipping containers filled with trash that was supposedly recyclable, it likely didn't come from B.C. The RCBC (Recycling Council of B.C.), which oversees all recycling in our province, does a good job of things, says Denise. But we can all do better.

When it comes to recycling plastic, she offers these tips for getting things right:

• Educate yourself. You can download an app from the Recycling Council that will tell you everything you need to know about recycling, or go to their website.

• Confused about what goes where at the depot? Don't feel bad—just ask. That's what the good people at Carney's are there for.

• No combined products, like kid's car seats, where you have plastic along with nylon, metal, etc. Plastic that is not packaging is usually garbage. Most plastic packaging, whether it's from batteries or baseballs, is recyclable. Just look for the triangular Mobius loop of arrows with the number, and you'll get your recyclable plastics to the right place.

Glenda Bartosh is an award-winning journalist who picks up garbage from parks and trails.