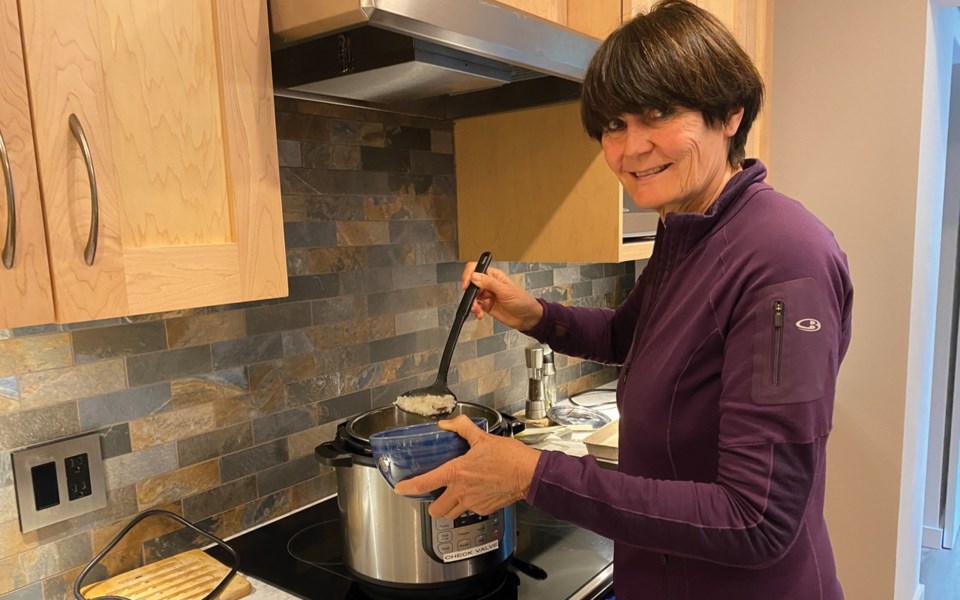 Maybe it's the times—all this time on our hands. Maybe it's the place. But a lot of us in these here parts are thinking of the "good ol' days" lately. Whistler back when... when Charlie Doyle was the avatar for the Whistler Answer (or was it the other way around?); when Chris Speedie was speeding around, taking iconic photos, including the infamous naked-skiers shot in front of Toad Hall; when a party at Seppo's was a party; and Bosco may or may not have bodysurfed The Keg's salad bar when it was down at Alta Lake.

Man, weren't women doing anything wild and crazy back then? I promise you they were, but they were too smart to have it go down in history.

Either way, when I asked Whistlerites far and wide how they were faring in these COVIDian times, I was happy to get responses from men and women from the good ol' days. Stories as comfort, and ideas for comfort food itself (read: "protection" or "healthy food").

Here are two, both from folks from the good ol' days, both with connections to people in these West Coast mountains learning Eastern traditions to stay well.

A perfect warming meal for a 'Junuary' day

As a cub reporter, I first met Shayne le Poer Trench (then Shayne Roberts) in the hallowed halls of the Whistler Question office when it was located above Dave Kirk's ski shop, across from the only grocery store in town—the one at the Husky gas station. In 1980, she'd landed in Whistler from Kenya when her then-husband, Dave Roberts, scored a job managing Whistler Resort and Club. At 20-some units, it was a far cry from the 340-room hotel he'd been head of in Nairobi.

For years, Shayne was a typesetter for the Question, one of the few who could copy-edit our mistakes while she typed up page proofs.

This recipe is a collaborative effort. Shayne learned about congee some 15 years ago, when she'd had a cold and a fellow connected to her Thai massage course suggested congee was just what she needed. Her partner, Hugh Smythe—another icon from the good ol' days and such a force in shaping Whistler he's considered one of its "founding fathers"—is in interested in all things immune-boosting. The mushrooms are his idea.

"It's soothing and grounding; really wholesome comfort food where you just feel good as soon as you eat it," she promises.

The boomerang just came back

Way back in "days of yore," namely the '60s in Whistler, a tall, gangly, auburn-haired Aussie named Ron West "laid" this simple snack recipe on friends, including Richard Bauder.

"This was 50-odd years ago when Whistler was still at the end of a dirt road from Vancouver, and Ron was a world traveller/vagabond who just stumbled into our Buddhist meditation group, and shared this extremely simple preparation with us," writes Richard in his email. "I tried it out and loved it, and later took it with me when I moved to the Rocky Mountains, early '70s."

Like the many young people who've landed on Whistler's doorstep over the years, Ron was odd-jobbing his way around the world. This was his "protection for the road."

We all can use protection at the best of times. Note the quirky, original qualifier from Ron ("Sheilas" being Aussie slang for "women"). Not sure about them, but what with mosquito season here, the timing is perfect.

(This can be made in an Instant Pot, or using other methods. Makes six servings)

Cook ingredients in an Instant Pot on manual, high pressure, for 30 minutes. Turn it off, and allow the pressure to release naturally (about 20 minutes). Or for a rice cooker: cook about 1 hour; Stovetop: simmer about 90 minutes, stirring occasionally so it doesn't stick. Everyone likes their congee a differently, but it should be soupy. Add boiling water if it's too thick.

Crispy shallot garnish (optional): One small shallot, or 4 to 5 green onions, finely chopped. Toss the chopped shallots in just enough olive oil to lightly coat them. Toast until crispy in an air fryer or frying pan; be careful not to burn them.

Most traditional recipes stir eggs right into the congee, but you can also softly boil some for about three minutes (very soft is best). Add them with the garnish, and salt to taste.

(Protection from mosquitoes and Sheilas)

Finely chop the onion and garlic. Place in a wide-mouthed Mason jar, and cover the mixture with oil. Stir. Seal it with the lid, and refrigerate for up to a week. Be sure to stir it every day.

Glenda Bartosh is an award-winning journalist who says, have fun protecting yourself!