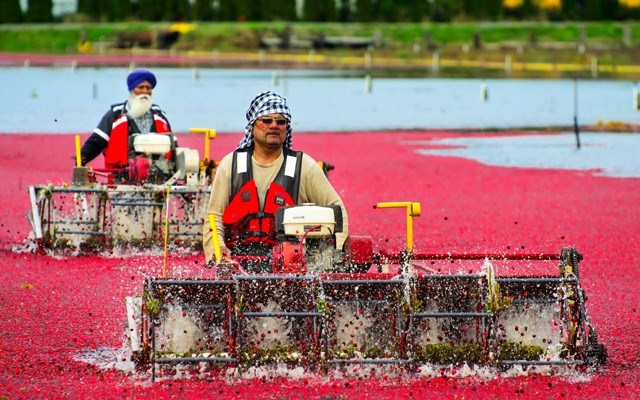 I have a nephew who can't eat tart things. They cause such a reaction in his mouth it's beyond puckering — it's painful! I'm sure there's a medical term for such a condition (his dad has the same reaction, so it must be genetic), but none of us have ever bothered to explore that. We simply don't serve them things like lemon meringue pie.

Or cranberries. These delightfully fragrant and often overlooked little powerhouses are the only fruit more acidic than lemons, and limes. Powerfully tart, yes, but also powerfully tasty and good for you, and a great local crop you can get behind year-round.

Cranberry sauce with turkey at Thanksgiving and Christmas? Of course. But don't stop there. You don't need roast turkey or the holidays to take advantage of this amazing fruit.

Commercial crops grown in North America are all variants of Vaccinium macrocarpon, a member of the heath family native to acidic bogs and peaty wetlands in the northeastern U.S. and central and eastern Canada. It's also cousin to other low, evergreen, creeping shrubs like the lingonberry and small cranberry (V. oxycoccus). Not just smaller in size, the latter also has a stronger, grassier flavour. Often called the European cranberry or bog cranberry, it's also native throughout parts of North America as well as northern Asia and Europe including Britain, the Netherlands and Latvia.

The Lower Fraser Valley and Vancouver Island make B.C. the No. 1 producer of cranberries in Canada. Together, the two regions grow about 750,000 barrels of cranberries each year (one barrel weighs 45 kilograms), accounting for about 12 per cent of North America's production. Now that's a lot of cranberry sauce.

Cranberries are nothing new for aboriginal people, who taught North American newcomers they were good to eat. After that early settlers incorporated cranberries into Thanksgiving dinners and long, threaded strings on Christmas trees.

In North America and Europe, cranberries have been wild-harvested for centuries. A gaggle of long-skirted women on their knees are featured in Eastman Johnson's 1880s painting, The Cranberry Harvest on the Island of Nantucket. That was before people figured out how to manage wild cranberry stands to increase yields. Eventually, farmers built ditches and dykes for water control, and the amazing artificial bogs used in some places today.

B.C.'s wet southern coastal areas are well suited to growing cranberries because so much water is needed. Every acre of cranberry bog needs three to 10 acres of support land in the form of reservoirs and wetlands to store or transport water.

The berries are harvested either dry or wet. Dry harvesting "combs" the low bushes to remove the berries. Wet harvesting, which is most common, involves flooding bogs with several inches of water and beating the berries from the plants with water reels. The cranberries float to the surface, where they can be corralled onto a conveyor belt and lifted into bins bound for processing plants.

Some of these phenolic compounds are antimicrobials, likely useful in protecting the cranberry plants in their damp habitat. And they can also be good for us. Some have been proven to be to be effective antioxidants. One, benzoic acid, is a common natural preservative.

And, yes, cranberry juice can help keep your bladder healthy. Micronutrients related to the berry's deliciously red pigment — called proanthocyanidins or PACs — prevent bacteria from adhering to various tissues in our bodies, and so help prevent urinary tract infections. A University of Massachusetts study also showed that PACs inhibited the growth of lung tumours and colon and leukemia cells in a laboratory setting. Lucky for us we have so many great cranberry sources in B.C.

The major cranberry classic, of course, is sauce. The first commercial one was made in the early 1900s when a large producer decided to process his damaged berries into a cooked and canned puree. It was a natural fit — the high pectin content in cranberries means they thicken quickly with just a bit of cooking.

But once you taste homemade cranberry sauce you'll toss the canned stuff forever.

Here's a quick, easy recipe from Canadian Living that tastes fabulous anytime. Mix 3 cups of fresh cranberries with 1.5 cups sugar (I use less), and 2 teaspoons of grated lemon rind. Microwave on high for about 7 or 8 minutes, until the cranberries pop, stirring once. Cool and serve. The lemon zest gives this sauce a wonderful zing. Bonus: you can store it in a covered jar in the fridge for weeks and use it to turbo-charge all sorts of dishes, from meatloaf to cream cheese on bagels.

Or try mashing a cup of berries with about 2 tablespoons of sugar or honey (or more to taste), 2 teaspoons (or more) of orange-flavoured liqueur and a bit of orange rind. Cook or microwave it all just a bit and use the result in your favourite pancake recipe (drained) or spoon it over porridge, liquid and all.

Your everyday meals just got a little brighter and healthier plus, if you look for local sources, you've supported B.C. cranberry growers at the same time.

Glenda Bartosh is an award-winning journalist with cranberries in her fridge right now.