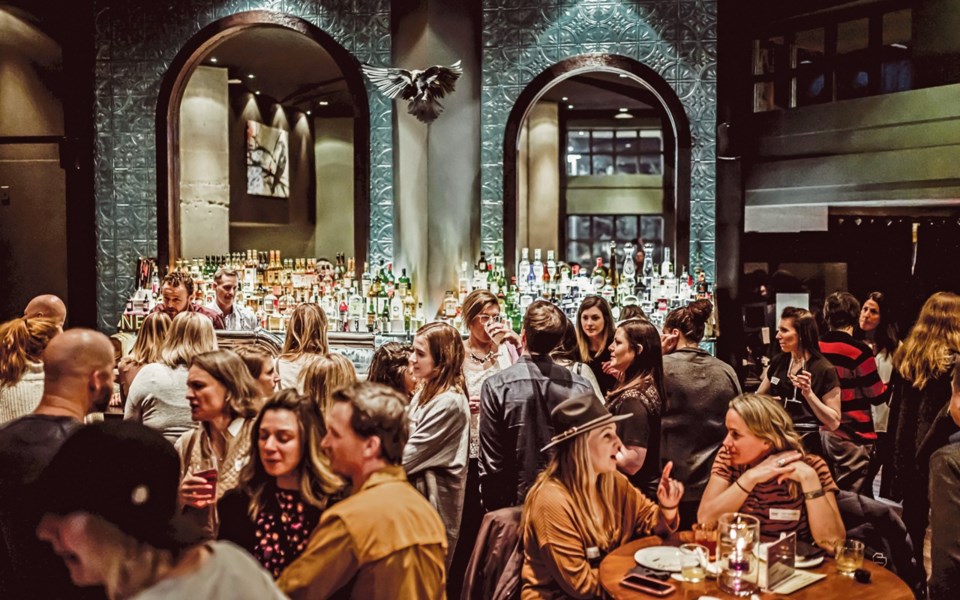 With the bar temporarily closed due to COVID-19, it goes without saying the team behind The Raven Room was in need of some good news. Earlier this month, it got just that in the form of two nominations for a prestigious awards gala celebrating the best and brightest of the global cocktail and spirits community.

"It just puts that extra drive into what we're doing—and we can't wait to get back open so we can do it again," said Luke Woodnutt, part of the local ownership team that includes wife Brandi, and Steph and Jason Redmond.

The stylish village bar was nominated in two categories at the 2020 Spirited Awards: Best International Hotel Bar-Canada, and Best New International Cocktail Bar. Founded in 2007 by the Tales of the Cocktail Foundation, the event has become one of the more sought-after awards recognizing beverage professionals, products and establishments around the globe. The Raven Room joins iconic Canadian establishments such as the Gerard Lounge at Vancouver's Sutton Place and The Lounge at Toronto's historic Drake Hotel in being nominated.

For a boutique cocktail bar that has only been open for 15 months, winning would be "a really, really big deal," said Woodnutt, who has been attending the New Orleans gala since 2017.

"It's where the who's who and all the big players are definitely at," he said of the awards. "Us being around for a year and a half, just being on that list is a great honour. I couldn't put into words how big of a deal that would be in the end."

With the regional nominees in place, the global top 10 for each category will be announced next month, before the winners are revealed in June.

Opened in January 2019, The Raven Room is the brainchild of long-time local bartenders and servers who put a particular emphasis on quality first, refusing to cut corners. It's that attention to detail Woodnutt believes that lies behind the bar being recognized in the first place.

"We're in the hospitality industry and that's our vision for this: people come in, they feel welcome and they're a guest in our home, essentially," he explained. "We want to make sure they enjoy themselves and give them everything they need, and if we need to, go above and beyond and make sure they leave happy and they remember the experience so that they come back again."

Tucked away as it is in the Pan Pacific Whistler Village, The Raven Room often relies on word of mouth from other industry professionals, a sign that they're doing things the right way, said Woodnutt.

"We get a lot of people that are sent to us from other restaurants, whether they're waiting for their table or they've finished their dinner and they're coming for a nightcap," he said. "We get recommended by a lot of the people in our industry, which for us carries a lot of weight."

Like the rest of the hospitality industry, The Raven Room has been hit hard by the ongoing pandemic, forced to lay off its staff. Woodnutt said the owners are "working together to get our systems dialed in" so that when the bar reopens, staff will be able to return to work as quickly as possible.

"We've been staying in touch with everybody via Zoom calls and trying to keep everybody's spirits high and let them know that we're here," he added. "It's definitely been a crazy time."

Once the bar is back in business, Woodnutt hopes to pick up right where they left off: continually raising the bar for Whistler's cocktail scene.

"We're super proud of what we've been able to accomplish here and we just hope we do better and that next year we can move higher in the ranks and get nominated again—or maybe even pull off a win at some point," he said. "We opened that door and we want to keep moving forward and be a leader in our industry and really help put Whistler on the map."

For the full list of Spirit Awards nominees, visit talesofthecocktail.org.