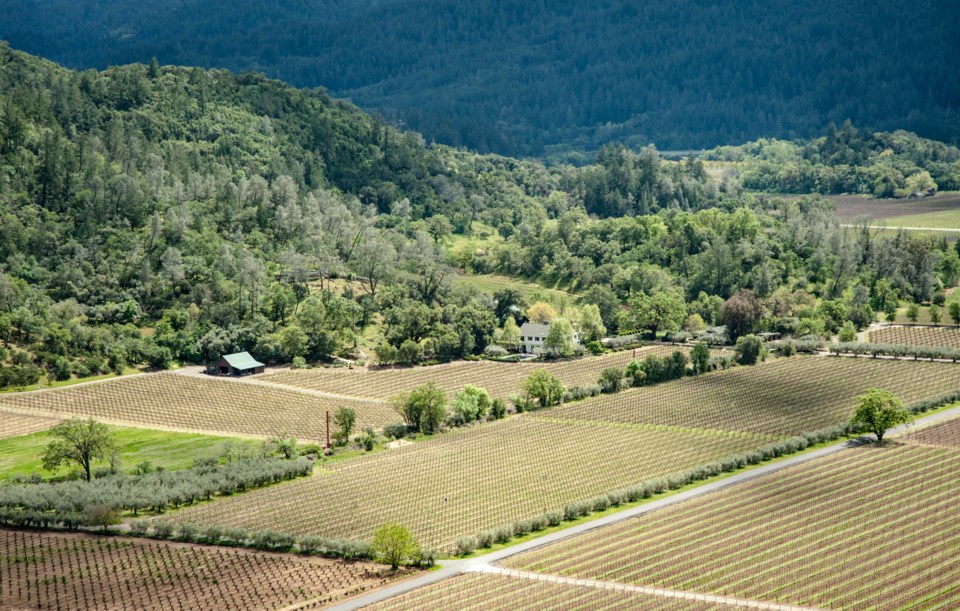 SENSE OF PLACE The Eisele Vineyard has gone through several iterations since its first vintage over 40 years ago, and it remains one of Napa Valley's most renowned wineries. Photo submitted

"Don't call it a comeback, I've been here for years."

Normally, it would be uncouth to quote LL Cool J in a story about one of Napa Valley's most renowned wineries, but in this case, the reference applies. Eisele Vineyard in Calistoga, Calif. has gone through multiple iterations since pioneering winemaker Paul Draper bottled the site's first vintage back in 1971. With owner Francois Pinault at the helm since 2013, the famed winery has fully embraced its distinct terroir, explained brand ambassador Taylor Smith, who is hoping to "reintroduce" Eisele to British Columbians at a winemaker's dinner this week. "It'll be a cool opportunity to reintroduce people to this epic site that has known many different expressions through the years," Smith said.

Part of this year's Cornucopia, the latest addition to the festival's Wine Cellar Dinner Series will feature an all-star lineup of wines paired with the culinary creations of Bearfoot Bistro's Executive Chef Melissa Craig.

"It's a very exciting opportunity to pair food with these spectacular wines. Mainly reds, which is a good challenge for me," Craig wrote in an email.

Known for its bold cabernet sauvignon, the 15-hectare Eisele Vineyard sits on an alluvial fan near the northern end of Napa Valley. In recent years, Eisele winemakers have moved towards "a slightly more gentle extraction, searching for purity in the wines, purity in the sense of place," Smith noted.

"It's really an elegant expression of cabernet, which lends itself quite well to food pairing. For that reason, it's not the most difficult cabernet," he continued. "Cabernet can typically be a hard thing to pair because you need something that will stand up to it, something like a tomahawk ribeye or some big, hearty steak of some sort. Eisele is much more finessed and nuanced."

While the menu for this Friday's dinner is still being finalized, Craig said the reception will feature Northern Divine caviar and Sawmill Bay oysters, followed by Thiessen Farms squab, Japanese A5 Wagyu beef, and B.C. chanterelle mushrooms.

"The idea was to show (vintages) from 10 years ago compared to what Eisele Vineyard is doing today," Smith said. "Showing the power of a vintage like 2004 that is 10 years older than the '14 ... you can see how powerfully youthful that wine is—it's a testament to the ageability and the magic of the site."

Tickets for the Nov. 16 dinner are available at showpass.com/bearfoot-bistro.

One of Cornucopia's hottest tickets is the World Oyster Invitational and Bloody Ceasar Battle, which returns to the Whistler Conference Centre this Sunday, Nov. 18. Also hosted by Bearfoot Bistro, the event brings the best oyster shuckers and bartenders to compete for epicurean supremacy. Attendees will get to sample succulent oysters, culinary creations from Bearfoot, as well as Bloody Ceasars crafted exclusively for the competition, fine wines, and craft beer.

A fundraiser for the Whistler Blackcomb Foundation, the Oyster Invitational takes place from 3 to 7 p.m.

Tickets are available at whistlercornucopia.com/oyster.