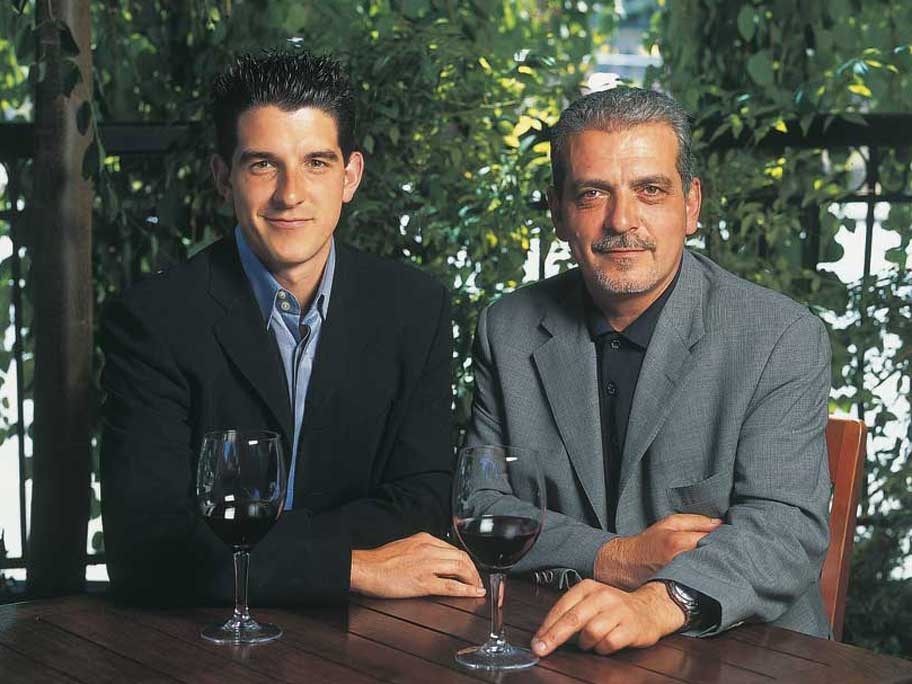 Hall of famers Father and son team Patrick and Antonio Corsi of Quattro along with James Walt of Araxi were recently inducted into the B.C. Restaurant Hall of Fame. photo submitted

The Hall Of Fame is a great place to have your name. Some very memorable people are hall of fame inductees.

Whistler resident James Walt of Araxi is a recently inducted Hall Of Fame member. Father and son team Antonio and Patrick Corsi, the owners of Quattro, are also new members.

The trio are members of the B.C. Restaurant Hall Of Fame.

Walt was given the Industry award for showing exceptional professionalism.

The Corsis were inducted in the Active Restaurateur category.

Another person inducted into the Hall Of Fame with a tie to Whistler was Megan Buckley, an executive with Hy's of Canada. She was also given the Industry Award for her professionalism.

The Corsis entered the Whistler food industry in 1996 when Quattro at Whistler opened in the Pinnacle Hotel with a distinctly Venetian feel.

Patrick was born in Germany and Antonio was born in Italy. Antonio was in Europe last week and according to Patrick, his father has spent much of the last 12 years in Whistler.

The senior Corsi trained in Europe to be a chef and moved to Canada in 1975.

Patrick grew up on the North Shore and worked with his father and uncle in the food industry.

Patrick says his father is a great teacher.

"I don't think I could have had a better teacher in life than my dad," Patrick says. "He's a fantastic human being and the best chef I know."

The pair became business partners 18 years ago and Patrick makes it clear that the concept of family is crucial to the Corsi business model.

"My dad makes the staff an extension of the family," he says.

Growing up, his babysitters were the restaurant staff members and many of those employees are still with the organization. People who work with the Corsi family tend to do it for the long term.

"We never operated our businesses like a corporation, we operated it as family business," he says. "I often say our restaurants were always places where people are greeted with a hug and a kiss and not a formal handshake. We made an environment where our staff looks forward to coming to work. It seemed to work for us."

That family environment was a factor in pulling Patrick back into the restaurant business when the lure of the theatre was tempting. In 1994 with backing from his father Patrick opened Quattro on Fourth, which is now known as Q4 and his holdings have evolved to a catering service that offers in-home service and event catering.

Patrick felt his father was a great candidate to be inducted into the restaurant Hall Of Fame with more than 30 years in the business. His son describes him as someone who shies away from the limelight, but someone who deserves recognition for his longevity in the industry.

"It was a massive surprise that they inducted my father and I together, the first father and son team," he says.

The senior member of the Corsi team joins his brother, Mario, in the Hall Of Fame.

The other Whistler inductee was working at the Sooke Harbour House on Vancouver Island before coming to Araxi in 1997 to be the executive chef. Walt was using ingredients mostly sourced from within 50 kilometres of the restaurant when he worked in Sooke. That notion of sourcing menu items as close to home as possible carries over from his work in Sooke as Walt creates regional cuisine based on sustainable ingredients found locally. The value he places on sourcing local ingredients was affirmed through his appointment as the executive chef to the Canadian Embassy in Rome.

He says his experience in Rome inspired him to cook even more locally and seasonally.

Walt's culinary travels have also included performances at James Beard House in New York. The James Beard Foundation offers events and programs designed to educate, inspire, entertain and create a better understanding of the culinary culture. Walt has performed at James Beard House three times. He is the only Whistler chef with the honour of performing at the prestigious venue.

Walt and the Corsis join some pretty notable Whistler food industry types in the Hall. Joel Thibault was inducted in 2006, Jack Evrensel followed the next year along with Andy, Lee and Peter Pulos from the Old Spaghetti Factory. Warren Erhart, Nat Bailey and Peter Toigo of Whitespot are all in the Hall Of Fame with Umberto Mehghi. David Aisenstat and George Tidball of the Keg Restaurants are also members. Buckley joins Hy Aisenstat, who was inducted in 2005. One more pair of inductees is connected to Whistler. Jeffrey and Peter Barnett of the Elephant & Castle were brought into the Hall in 2007.

Who from Whistler will be inducted next year? While we wait for the answer to arrive in October congratulations are in order for Walt, the Corsis and Buckley.