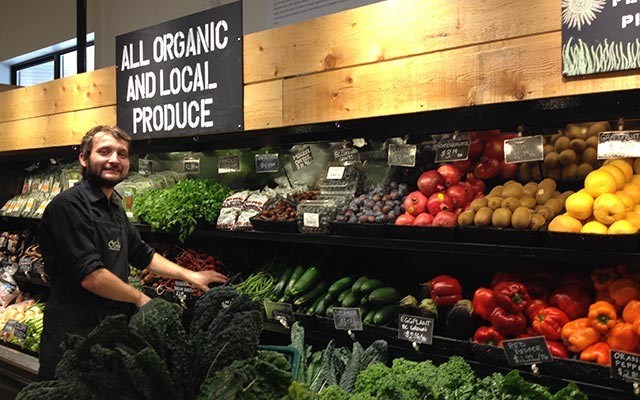 As worthy and wonderful as it is, science can be an awfully slow creature.

For when it comes to organic food, we finally — finally! — have scientific evidence that besides all the anecdotal benefits of it being tastier and more fulsome as well, as proof it's better for the environment — it is actually healthier for us. And that isn't simply because organics aren't drowned in chemical fertilizers, pesticides, herbicides, hormones and antibiotics.

After years — decades — of "experts" saying no, there are no differences nutritionally between organic and conventionally produced foods, research by an international team based in the U.K. has proven otherwise: Organic fruits, veggies and grains contain more antioxidants as well as lower levels of toxic metals and pesticides.

According to an article in The Guardian, Newcastle University's Research Development Professor for Ecological Agriculture, Carlo Leifert, and his team concluded there are "'statistically significant, meaningful' differences, with a range of antioxidants being 'substantially higher' — between 19 percent and 69 percent — in organic food."

The conclusion, which was based on more that 340 peer-reviewed studies from all over the world, has had its detractors. But at the heart of the findings is a pretty logical observation: "plants produce many of their antioxidant compounds to fight back against pest attacks, so the higher levels in organic crops may result from their lack of protection by chemical sprays." The scientists also suggest other substantial reasons for the results, such as "organic varieties being bred for toughness and not being overfed with artificial fertilizers."

The researchers also found that conventional crops contained a much higher level of the toxic metal cadmium, and about four times the level of pesticide residues compared to organic food.

No doubt more detractors will continue to weigh in, as they should. But in the meantime, I, and I'm sure many others who have been advocating organic foods for years, feel vindicated. That includes Wallace Barr, store manager at Function Junction's Olives Community Garden, where all produce and about 80 per cent of the entire store's inventory is organic (it's also 100 per cent GMO-free).

"I'm passionate about eating both local and organic — I think it's really important," Wallace says, citing how much the store also tries to source locally, especially from Pemberton farmers.

"I do it because I've worked in lots of different kitchens and things like that before, and I've realized that the food actually tastes better and you definitely get more nutritional value from it. But also because I don't want to put all those foreign chemicals into myself."

Wallace's reasons for going organic correlate perfectly with a survey done by the Soil Association in the U.K. that was also part of the Guardian article. It showed that 55 per cent of people said they bought organic food because it was healthy; 35 per cent cited better taste; 53 per cent cited the avoidance of chemical residues; and 75 per cent said it was out of concern for animal welfare or the environment. (Respondents could cite more than one reason.)

When I point out that many of us organic fans have believed the food was more nutritious (like the 55 percent above), even though this Newcastle U report is the first scientific verification, Wallace isn't surprised. He puts our intuitive reactions down to the same factors most of us respond to in life — good looks and first impressions.

"You walk into our store and look at our produce department — it jumps out at you. Our produce definitely looks healthier, it looks better (than conventional produce)", he says.

True, true, true. My husband and I often pick up organic beans or lettuce, compare it to conventional ones, note the healthy-looking organic difference and buy accordingly. We're not the only ones.

Wallace reports that Olives' sales and growth have been literally skyrocketing since they opened less than two years ago. And The Grocery Store and Nesters Market at Whistler are riding the organic upswing, too.

"We're seeing a lot more [organic sales] over the years, " says Scott Aldrich, grocery department manager at The Grocery Store, where organics have a variety of profiles —their coffee, for instance, is mostly organic and fair trade, while about 10 percent of produce is, with popular items like salad mixes, apples and bananas stealing the organic show.

Scott says it's a closed loop. More and more customers want more organics. Suppliers are supplying more, so economies of scale are kicking in for lower prices. Plus here's an interesting factor in the mix — organic product packaging is getting more and more alluring.

"When it first started off, you had these small producers with this hippy-looking packaging, and it doesn't appeal to a lot of people," he says. To wit, I think of Bob's Red Mill oatmeal, flax and the like. I love the products and the little face of Bob himself on every package but overall, yeah, it's pretty dull and Birkenstock-y with tons of teeny 8-point text, and nerdy brownish colours.

Ian Fairweather, assistant manager at Nesters, says organic sales there have definitely increased, allowing them to offer "more product selection than we normally would have been able to, say, 10 years ago." That includes about one fourth of their produce section devoted to organics, many from local farmers in Sea to Sky, and a big selection of organics in the dairy department, where things like grass-fed, organic milk and butter are hot right now.

"I think it's because people are really conscious about the hormones that are being used in the production of cattle — they are really concerned about what they are feeding their kids," he says.

Nesters is also big on what's called blending — that is, blending organic items in amongst conventional products on the shelf so we see the organic peanut butter right next to the regular one. This reminds us of choices and gives organics a boost.

The thing is, while places like Nesters like to buy local, organic produce for their savvy, healthy Whistler customers, those same local organic suppliers for things like flowers and fresh produce have a very narrow supply window. But the good news is more and more suppliers are kicking organics into their supply chain. One of Nesters' biggest suppliers is a natural whole food company offering organic and natural foods, so the prices and choices can only get better as better dynamics ensue.

Now you've got the scientific proof so get out there and support the organic team. It will only get better if you do.

Glenda Bartosh is an award-winning journalist who's been buying organic since the 1970s.