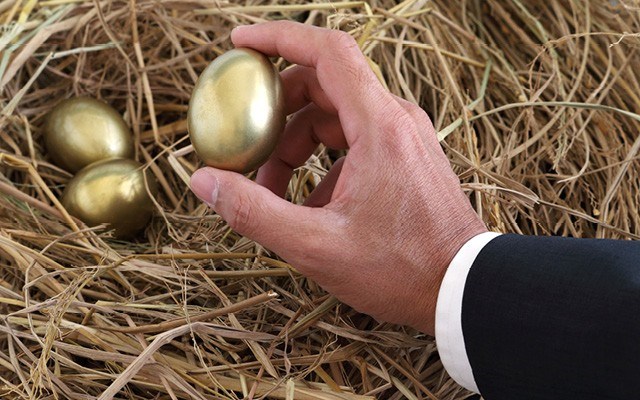 If you're lucky, all kinds of eggs — chocolate and otherwise — will soon be tucked into all kinds of secret locations for you to find next Sunday.

The egg, with its symbolism of fertility and renewal, has been tied to all things Spring and Easter since ancient times. The Norse, the Persians, societies thriving long before Christianity arose all used eggs in various symbolic rituals around this time of year. But the reason for stashing them in secrecy for kids old and young to find is something quite mysterious and as tough to pin down as a bunny.

Maybe it has to do with the fact that, as historian Margaret Visser points out, it is, remarkably, a male rabbit with all these eggs. I picture him hiding them uneasily because of the quirky association. Christians have linked the secretive egg thing to the idea of hunting for Christ's hidden tomb. More likely, I suspect, it's simply our very human, universal love of puzzles and secrets that fuels the traditional Easter egg hunt, a tradition that keeps morphing, most recently as geocaching.

The combo of secrecy and food, though, remains something quite timeless. The relationship is rife with notions of exclusivity and social power or class, as in, I know or have something you don't, poor you. The secret to making coffee properly, say, as was the case when the drink started moving out of Ethiopia, across the Arabian Peninsula and into Europe some thousand years ago. Or when your cousin absolutely refuses to share his secret for the turkey stuffing everyone loves.

I actually have one of those secret recipes, from a restaurant I worked at in San Diego a hundred years ago. Called Rasputin's, it was a glittery sort of place with brocaded booths that whispered secrecy, a place that doubled as a disco complete with spinning glitterball at night. These were Saturday Night Fever days.

An audacious, over-dressed woman of a certain age who claimed to be the daughter of Rasputin himself visited one afternoon, having arranged a free lunch for herself and her crazy entourage, which was so large it shut the place down. The highlight: the ornate snuffbox she whipped out after lunch, the first time I'd ever witnessed one actually being used. It was filled with an interesting white powder one of the more seasoned waiters had to explain to me — her little secret.

Don't ask me why, but that ridiculous place affecting some sort of fin de siècle Russian air served a terrific quiche Lorraine, which, if I remember right, Madame Rasputin and several of her hangers-on ordered. It was one of my favourites, too, and when I left that restaurant for bigger, more Canadian pastures I begged the chef, a wiry little Welshman who couldn't have been more than five feet tall, for the recipe. He finally relented. Chef's secret is now mine, on a beautifully stained piece of paper.

In the '50s and '60s, housewives were besotted with magazines like Family Circle, Gourmet and Better Homes and Gardens for insider secrets on how to serve the best Easter ham, the best cocktail party, the best kids' birthday cake ever.

About the same time all things "French" and "Continental" were the best-kept secrets in town. Julia Child to the rescue — one of the best and biggest busters of food secrets in decades. Her signature first volume of Mastering the Art of French Cooking was published in 1961 and the middle-class, English-speaking housewife never looked back.

Julia unmasked brioche and crème fraîche and a perfect génoise — the building block for French classics like petit fours and what she called a "very well behaved cake." That is, as long as you "stop folding as soon as the last speck of flour has disappeared." Another of her classics, Baking with Julia, has an entire section devoted to "Taking the Mystique Out of Meringue."

Today, we seek out tweets from "foodies" and "celebrities" for tips, only they're more likely "secrets" about where to eat out rather than classic or exotic recipes to be made at home.

It's often left to literary food writers and historical anthropologists like Visser or just plain great writers like Bill Bryson to uncover sought-after kitchen secrets. Bryson's At Home: A Short History of Private Life, for instance, has a revealing chapter on the scullery (the small kitchen for washing up) and the larder (food storage area), including secrets for polishing silver with lard and keeping the servants themselves "invisible."

Sometimes the signature secrets of commercial brands are so well kept the release of same can be a flashpoint. The Chicago Tribune last year caused a mini-uproar when it published the recipe, including the 11 secret herbs and spices, for Colonel Sanders' finger-lickin' good Kentucky Fried Chicken. A few years before, Coke was the big reveal when Time published the recipe, the post-cocaine recipe, that is, including the secret 7x flavour for the syrup.

Cookbooks and the like based on commercial ventures also expose food mysteries. Chefs in Pique's own Chef's Choice: A Whistler Cookbook offer so many recipes for dishes you enjoy in Pemberton and Whistler eateries you no longer have to long for their secrets.

And hats off to White Spot and Kerry Gold for The White Spot Cookbook, a fun read that takes us behind the scenes of this nearly century-old B.C. icon, including tons of recipes. You can make yourself White Spot's signature meatloaf, fish & chips, a peanut butter, bacon & jalapeno burger (one of their Burger Guest Stars), and more. But there's one exception. That famous Triple O sauce is still a well-kept secret.

Glenda Bartosh is an award-winning journalist who loves secrets.