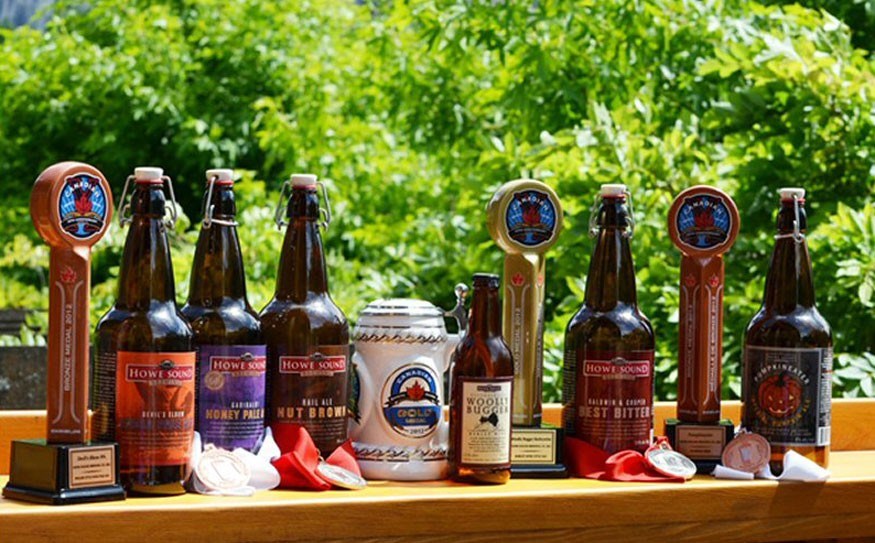 With a name like Woolly Bugger Barley Wine, it just has to be a winner.

The brewpub and inn came away with a total of seven medals from the two competitions.

Wooly Bugger Barley Wine was awarded a gold medal at the Canadian competition.

The brewery's barley wine is described by HSB as a rich, malty barley wine-style ale and it is named for one of the most popular ties used by anglers. The extra strong ale clocks in at 11 per cent alcohol by volume and the limited release brew was bottled in 342 ml glass containers.

"While not a huge fan of barley wine, and having not yet tasted one that really floats my boat, the Howe Sound Woolly Bugger blew me away," writes Kamran Ahmed of the blog called Beer and Whisky Digest.

His colleague, Tristan Perry, wrote: "Without a doubt, Howe Sound Brewing's Woolly Bugger is one of the best barley wines I've had to date."

Brewery Manager Paul Wilson went to the awards ceremony in Montreal and gushed afterwards about how competitive it is in the microbrewery world.

"The level of competition north and south of the border has skyrocketed in the last few years. The tastes and creative spirit of brewing is changing with sours, barrel aged beers and unique artisan flavors becoming more mainstream," says Wilson.

The North American Brewers Awards were held in Idaho Falls this year and HSB brought home four medals from that competition.

From the competition in Idaho, two silver medals and two bronze medals were brought back across the border.

"We feel it's important to compete in both Canadian and American events as we distribute in several Canadian provinces as well as several states in the U.S.," Wilson says.

The brewery's Pumpkineater is, no surprise here, a seasonal ale. It is a brewed with barley, fresh roasted pumpkin, hops, cloves, cinnamon, nutmeg and star anise. A very limited amount of this brew is produced each fall.

The Garibaldi Honey Pale Ale unites the Sea to Sky corridor by making all-natural Lillooet honey the star ingredient. The label on the bottle pays tribute to Garibaldi, the man and the mountain. Mount Garibaldi was named for Italian hero Guiseppe Garibaldi.

The other three winning beers are nods to the first people to climb the Grand Wall of the Stawamus Chief (Baldwin and Cooper), a section of the Elaho River (Devil's Elbow) and region's strong historic connection to the rail industry (Rail Ale).

HSB is the little business that could and has.

It opened its doors at the south end of Cleveland Avenue in 1996 with a pub, a restaurant, meeting space, 20 guest rooms and the brewery.

John Mitchell, the man described by many as the grandfather of microbrewing in Canada, helped get the brewery up and running.

In the time since Dave Fenn and his early partner Stephen Shard launched their new business in 1996, the brewery has scooped up almost 40 medals from the CBA and the NABA.

The brewery is pumping out 26 ales and lagers that are being distributed to places around B.C., across the border into Washington State, Alberta and soon Ontario will start drinking HSB product.

Draft beer from HSB will start flowing in Washington State in September as well.

The little business that could is now looking for additional space to expand its brewing operations as the brewery is pushing the limits of its capacity in the current location.