Tasty tidbits gleaned in these interesting times
May 23, 2020 8:00 AM By: Glenda Bartosh 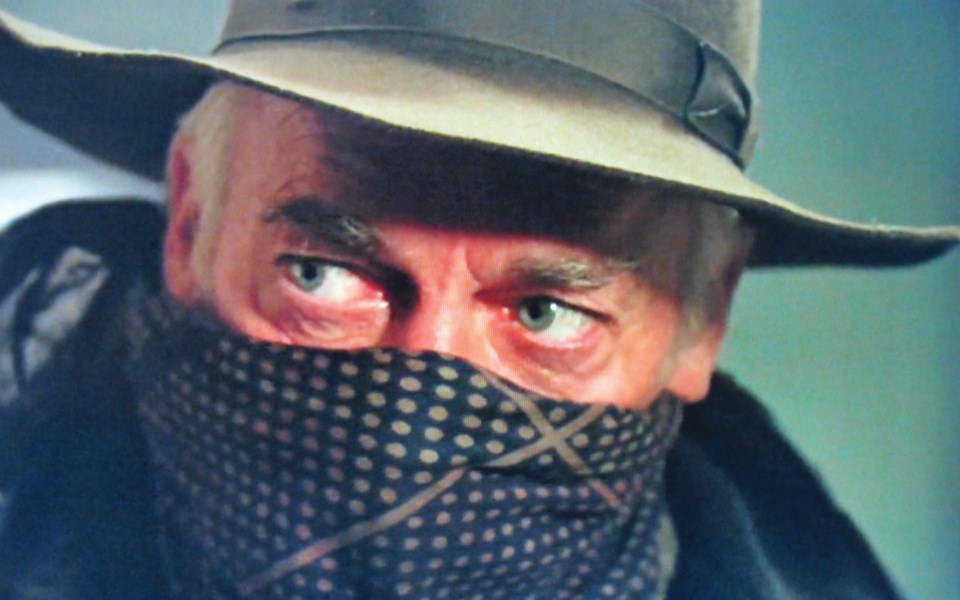 FOXING AROUND Richard Farnsworth, the impressive star of Philip Borsos' 1982 award-winning gem, The Grey Fox , proved that wearing a mask, no matter what your age, definitely has its plusses. The Borsos Competition for Best Canadian Feature is a keystone of the Whistler Film Festival. Screenshot

It struck me the other day that I've learned some pretty far-out things while staying in. They cover the gamut, but essentially stem from two thankfully complementary factors: my nerdy curiosity combined with all this time on our hands.

For instance, it's hard to imagine a day before lockdown when I would have taken the time to really dig into the etymology of "pyrrhic"—and I mean dig beyond a dictionary. Turns out it's from the Ancient Greek king, Pyrrhus, whose tendency to be one of the strongest opponents to the long arms of Ancient Rome created all kinds of unacceptable heavy losses for him. Ergo "Pyrrhic victory," which traditionally used the cap "P" in honour of old king Pyrrhus of Epirus.

As for my nerdy curiosity, it's triggered many a fun turn in life, and these days nicely supersedes that, A) I'm not "The Domestic Type" (just ask dear hubby) and, B) I ain't no foodie. In fact, the term makes me cringe, something that will come as no surprise to you if you've been reading this column for the past 19 years.

So 'tis with great surprise I've found myself avoiding all kinds of domestic Pyrrhic victories while staying home, literally stumbling onto quiet little gems filled with both surprise and delight, and putting the lie to my initial fears that I would suffer many a heavy loss from being bored out of my home-based gourd.

1. It really is cool to wear a mask (see Richard Farnsworth, above). Well, we've all known that for years, we've just kind of forgotten it.

2. It's totally fun to plant a lemon seed in a tin can you've punched a pattern of holes into the bottom of using different sized nails so it looks like a spiral staircase to heaven.

3. It's totally possible to legally make a cake so loaded with chocolate, sugar and caffeine you get high on it. (Thank you, Ruth Reichl, for your very insane and very New York Last-Minute Chocolate Cake recipe; perfect during any lockdown—and beyond.)

4. When your melted chocolate turns into a weird blob (see No. 3) it's seized, and, yes, you can unseize it, which is actually quite a lot of messy fun.

5. Those ancient diaper pins with the yellow plastic safety clasps, which normally would secure my passport holder inside my waistband while tromping around some place like northern Thailand (don't think I'll be using them for anything like that anytime soon), can creatively secure a poorly designed kitchen hand towel to a towel rack.

Since I'm no expert on sourdough bread despite recent domestic explorations, ask Paula Lamming over at Purebread or Eileen Keenan up at Birken House Bakery just what the average length of a sourdough loaf might be. But you've gotta admit this is one very cool metric that the Yukon Health and Wellness Department came up with. They also say it's about the same as staying two huskies apart (tail to tail), or the length of your average caribou, antlers included. Oh, to see such wit embedded in public directives around these here parts. The Grey Fox (alias Bill Miner) would approve.

7. Yes, those "large" eggs really are smaller. I thought they were, so thank you Naomi Powell at the Vancouver Sun for your enlightening piece on how the collapse of the tourism and hospitality sectors along with the closure of restaurants and more have pushed eggs normally bound for the commercial supply chain into the consumer one. Ergo smaller "large" eggs in your carton.

I can't wait for a rethink of the entire food supply chain after this whole thing settles, so we can collectively figure out how to avoid all the tragic waste that happens all the time but has now been horribly exacerbated and brought into the public spotlight. No one wishes a pandemic, ever, but we won't suffer such Pyrrhic victories over this one if we create better paths forward.

8. When you really are a non-domestic type and don't feel like baking but crave a piece of cake, try making my recent invention, cake-porridge. My mom recently passed along a tasty, easy recipe from an old neighbour in Edmonton (thanks to the late Anita Bazelwick!). I haven't quite gotten around to it, but it uses a block of dates and lots of walnuts. Since those were sitting idly on the counter one morning, I grabbed some, added them to my favourite Sunny Boy porridge and, boy, what a fab invention that was. My best porridge pal, the late but great Bob Eldridge of Pemberton, would approve.

9. You really can make one small carton of homous last for four meals. It reminds me of something my dad said about eating in the navy in the Second World War: "They told us to always leave the table a bit hungry." Makes for leaner, meaner fighters.

10. We really can entertain ourselves without our pals and loved ones, although we miss them dearly.

11. Maybe we can't stick together, but I just learned how to stick food together. Just go down to the beach and get some kelp, well, red kelp, actually, the source of carrageenans used to thicken everything from yogurt to sauces. But kelp, like so many other taken-for-granted things, is actually way more useful than that. More on that later.

Glenda Bartosh is an award-winning journalist who's still digging to learn what monatomic gold is.