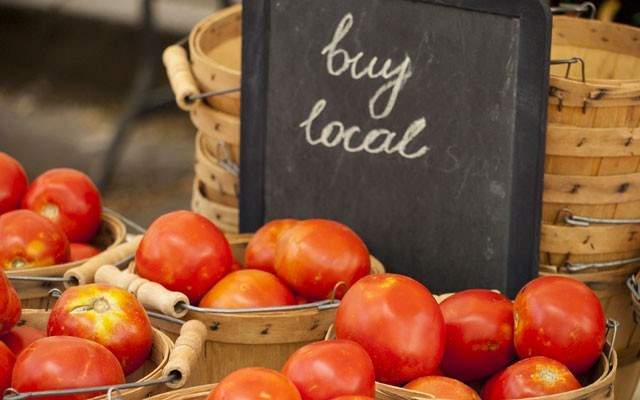 A survey conducted recently tells us great things about our thoughts on food and our food spending habits.

NRG Research Group and Peak Communicators teamed up to ask people across Canada about our thoughts on food production, pricing and purchasing. The survey found that British Columbians value locally produced food.

The surveyors reported that 85 per cent of the people questioned in B.C. indicated local production of fruit, vegetables, meats and dairy is important to them. Locally sourced fruit, vegetables, meats and dairy proved to be far more important to most of the people surveyed than other factors like low price and fair-trade status.

This will come as delightful news for farmers in Pemberton.

Lesley Duncan, a research manager with the NRG Research Group in Vancouver, says the pattern generated by the results suggests we prefer to give our money to individuals and small businesses rather than larger corporations.

"Given the choice, consumers are looking for local food at a good price," says Duncan. "There is a willingness to pay more for attributes that are considered important to shoppers, but in the best possible world local food wouldn't cost more."

The survey companies found an interesting divide when it comes to pricing. Shoppers over the age of 45 tend to be less concerned about price. The price of food, on the other hand, is a higher priority for consumers under the age of 45.

When Chris Quinlan, the manager of the Whistler Farmers Market, saw the results from the survey he quickly concluded the information would be valuable for his Whistler market vendours. The survey results got him thinking about the number of Sea to Sky residents who are looking for, and regularly consume local produce.

Whistler market vendors from beyond Lions Bay and Lytton pay a premium to sell their produce at the market in Whistler.

"The people that are consistently frequenting our market that are looking for the organic produce and are spending the time talking to the producers, price is not as big an issue for them," he says. "It's really what the culture of markets are about, that regional food culture."

When Quinlan put some thought into the difference between Sea to Sky food shoppers and the folks who live south of Lions Bay, he insists if the survey drilled down into the corridor it would find that Sea to Sky residents are keener about local produce than residents of the city to the south of us.

"Local is the driving factor," he says. "The organic side of it, it's another segment and I think that within our corridor it's larger than you would find it outside our corridor."

One piece of evidence he points to is the marketing being done at the large chain grocery stores in the corridor. He says some of the outlets are buying produce from B.C. farmers and heavily promoting the fact that it is local produce.

"They have the farmers' market branding on everything," Quinlan says of the tactics being used by stores like Nesters and Save-on-Foods. "They're kind of stealing our thunder a little bit. They're trying to drive people to that brand of locally produced products. They're smart."

He doesn't mind that because some of chain grocery stores sponsor the provincial market association and the stores buy a huge amount of regional products, which keeps farmers in business.