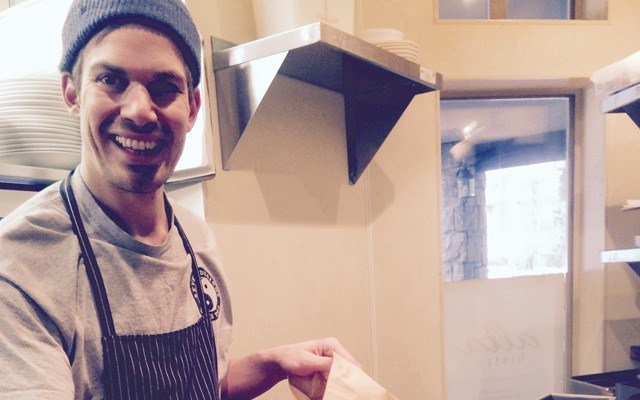 The cat is officially out of the bag: Ed Tatton bakes a damn good loaf of bread.

What started out as a something of a hobby in between shifts at Alta Bistro has blossomed into a burgeoning side business for the British sous chef.

"I wanted to start making my own naturally leavened sourdoughs, so that means we don't use any commercial yeast," Tatton said. "It's three ingredients: flour, water and salt."

When Tatton first started at the modern French bistro a few years back, the bread was brought in from bakeries in the area. But with Alta Bistro's unwavering commitment to sourcing local, organic ingredients, Tatton decided it was high time to get back into one of his passions. The loaves were such a hit at the restaurant that people started asking where they could buy it for themselves.

"At that point, I did a bit of research and I saw there was nowhere to buy locally made (natural sourdough) in Whistler," Tatton recalled. "I saw a bit of a gap in the market, and thought, 'How do I want to approach this?' First of all, I wanted to do it all-organic, and also keep it as local as possible."

Word quickly started to spread, and almost two months after launching the project, called BReD, Tatton is pumping out close to 50 loaves a week for locals in the know.

The baking process is a painstaking one, and the time and care Tatton puts into each loaf is undeniable (trust me, I had the good fortune of sampling a slice and will never badmouth whole wheat again). It begins with the all-important starter — "It's almost like a child; you have to look after it and make sure it's at the right temperature," Tatton explained. That culture goes into the leaven sponge before being added into the dough, which is mixed and left to rise for 18 hours. All in all, a three-day process once bake time is factored in.

Tatton is intent on trying out new loaves, and the direct link he has to his clientele — customers order through the BReD Facebook page and pick up at the restaurant — means he gets immediate feedback on his creations.

"It's been really nice to have that sort of face-to-face contact and to do something for the community. It started out as just friends and friends of friends coming, but now I'm seeing new faces," he said. "I am selling out every week."

Some of Tatton's loaves so far have included the aforementioned whole-wheat sourdough, rye and toasted flax seed, sprouted buckwheat with toasted oat groats and sprouted spelt and poppy seed.

"Instead of adding flavouring to it, I'm really passionate about allowing the natural grains be the star of the show and be the forefront of the flavour," said Tatton. What's more, is because his bread is rich in bacteria and uses only all-natural, organic flour and ancient grains, it's perfect for those with sensitivities to gluten.

"I've read studies before where scientists have said that nine out of 10 people who say they're gluten-intolerant don't even realize they're able to eat sourdough because it's so low in gluten," he added. "It doesn't normally flare up, make them tired or have these side effects they're used to when they eat pasta or other things like that."

For now, Tatton is content with maintaining his small-scale operation and building the brand in the community, although he does have his sights set on the long term.

"My dream would be to have a small bread shop," he said. "I'd keep it just bread pretty much, with maybe a couple small, to-go breakfast items. But it'll all be naturally leavened, it will all be organic, and then possibly (feature) a small craft beer section or something like that."

For those interested, the loaves cost $7 and can be ordered by sending Tatton a message through the BReD Facebook page (www. facebook.com/EdsBReD). Orders must be in by Tuesdays at 6 p.m. to pick up at Alta Bistro between 8 a.m. and 11 a.m. on Thursdays with your payment in-hand.