The currant, not The Current 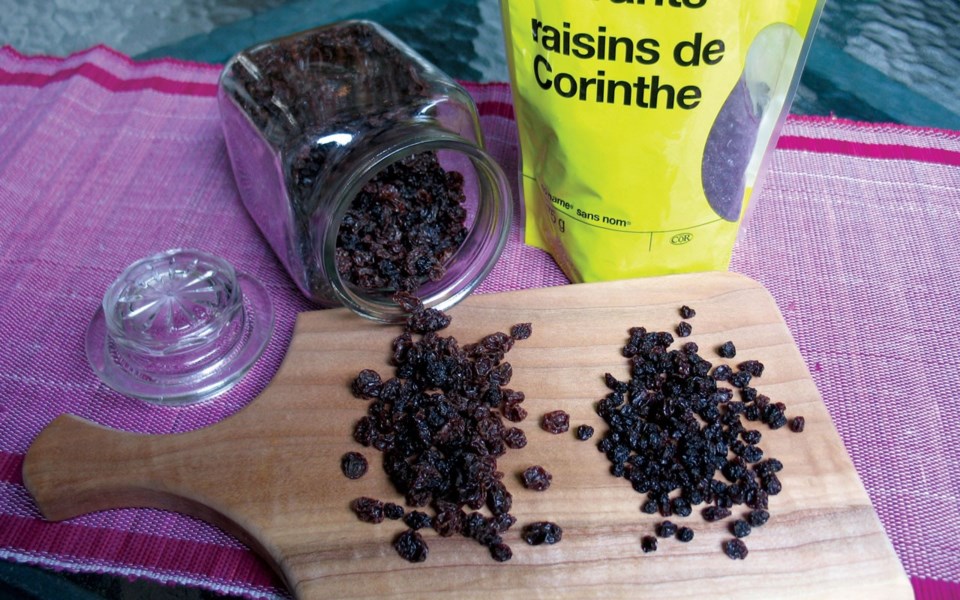 CURRaNT CONDITIONS Tasty little currants are nutritional powerhouses. In this case, size might matter: Taste tests reveal that the organic ones (left), which are bigger, plumper and more colourful, are definitely tastier, too. PHOTO by Glenda Bartosh

I was on about currants the other day with one of my longest-time Whistler pals, Anita Webster. The ones you eat, to be clear. Not electrical ones, not river ones, not ones of affairs or otherwise—something hard to distinguish when the word is spoken, not written. (I always feel badly for people learning English, currently or otherwise.)

Anita and I worked the pre-digital trenches and plywood paste-up benches of the now-defunct Whistler Question light-years ago when the office was stationed above what's now Southside Diner. In those days, Dave Kirk's Whistler Village Sports was downstairs, rather than vinyl booths and the best hangover-soothing brunches in town.

During our "currant" exchange, Anita recalled that in the hallowed halls of CBC Radio, where, after a stint at Carleton University for journalism she went on to work, someone sent out a reminder when what eventually became their signature current affairs show started: It was The Current, not The Currant. Good ol' radio.

I laughed at the image of a dark, shrivelled berry holding sway at CBC. But here 'tis indeed The Currant—not The Current—getting airtime for good reason, including how healthy they are for you, and how un-currant-like most currants really are.

First, this whole currant thing started when I felt like I wasn't getting enough iron as I kick more and more meat out of my diet, and Anita, one of the longest-reigning vegetarians I know, is a good sounding board. Less meat means less iron, and I'd been intuitively craving the pumpkin seeds, the coconut, the spinach, the dried apricots—all of which contain pretty good iron for non-meat sources.

I was also craving currants, or to be more accurate, the amazing red lentil and currant salad Anita brought to our house one day, and has since become a family favourite. Turns out, currants are also a pretty good iron source (half a cup provides about an eighth of your daily iron), but red lentils are even better—a single cup delivers more than a third of your daily requirements.

During my latest salad-making venture, though, I ran out of currants. Hubby to the rescue, dashing out for a bag of currants (see photo, above). But wait, what was that on the classic yellow No Name bag? (No, they didn't pay for this plug; No Frills is simply our closest grocery store.)

Raisins de Corinthe? And a product of Greece, when I know Canada grows all kinds of currants—wild, domesticated; red, black and more. Now that was an eye-opener, so off I went, investigating the mighty currant, and here's what I can tell you...

First, it's true: The currants you buy for holiday baking, snacking or otherwise are indeed the dried fruit of a seedless black grape cultivar known as Vitis vinifera "Black Corinth." (Vitis vinifera is the Latin name of the common grapevine.) So all the so-called currants we buy are really dried grapes, or raisins!

Phoenicians and Armenians started the raisin trade with Greeks and Romans in ancient times. Today, Greece is home to about 70 per cent of all raisins de Corinthe (in Anglo-French), so named for Corinth, where raisin exports originated. "Zante currant" is another common name: "Zanta" is the Greek Island they were later exported from; "currant" is derived from the Greek city, Corinth.

As for those lovely, tart red currants like my grandad grew in Edmonton and made into delicious red currant jelly by slinging the fruit into a white cotton sugar sack dangling from a broomstick balanced between two chairs, the ruby-red juice drip, dripping out for days—they're from a woody shrub in the genus Ribes. Likewise the black currants native to northern Europe and Asia that we love in our Ribena, black currant jellies, and crème de cassis. These currants are never dried. Nor are the four varieties of wild currants that grow in the Pacific Northwest—all edible, although the flavour is somewhat dubious. We also have a wild black gooseberry plant that's part of the Ribes family.

As for those lovely, tart Greek currants, I mean raisins, run out and grab some for Anita's excellent salad, below. They're so nutritious—high in vitamins and minerals besides iron, and proven to have preventive effects against cancer and diabetes—that they're a key part of the healthy Mediterranean diet. We still prefer the organic ones we normally buy (the flavour is fuller and fruitier), but a bag of any type will do anytime.

For dressing, whisk together:

Wash lentils. Cook in boiling water 4 to 6 minutes, or until just tender. (Test after 2 minutes). Rinse and drain well. Combine with dressing. Let sit overnight in the fridge. At least 2 hours before serving, add currants, capers and onion to lentils to blend flavours. Note: We prefer only about half the dressing. Store the other half in your fridge for a delicious ready-made dressing.

Glenda Bartosh is an award-winning journalist who loves her currants.