We were drying off from a quick poached swim in my neighbour's pool, when my four-year-old eyed their slackline, stretched at about three feet off the ground, between two trees. It's a rock climbers' version of the tightrope.
Apr 4, 2018 6:00 PM By: Lisa Richardson 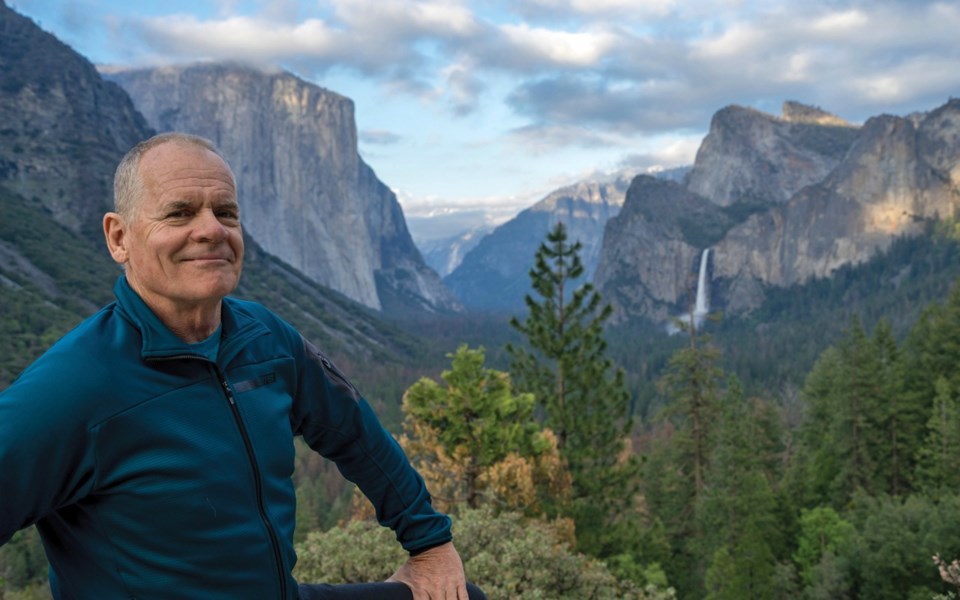 top of the world Renowned rock climber and author John Long will be speaking at the World Ski and Snowboard Festival's MULTIPLICITY event on Tuesday, April 10. PHOTO submitted

We were drying off from a quick poached swim in my neighbour's pool, when my four-year-old eyed their slackline, stretched at about three feet off the ground, between two trees. It's a rock climbers' version of the tightrope. The boy immediately picked up the ski poles lying beside it, and stepped onto the inch-wide webbing.

I expected him to get pinged off like a cartoon character in a rubber band slingshot, but he steadied himself and walked along the tightrope as if it were nothing.

The balance, the wobble, the glee, emboldened me to try it.

I tested the webbing gingerly with my foot, leg high-stepped up to the slackline, waiting for it to stop vibrating so I could put my weight on it, but it just thrummed frantically, more erratically, menacing me with the idea that I was going to somehow break my nose. I felt like I'd get shot off like popping corn if I weighted it any more.

Husband was back in the pool and yelled his advice from the sidelines: "You've got to commit."

I'm 42. Married 22 years. Have a four-year-old. Those things require commitment, more than any of the other regrettable work "commitments" I so diligently dedicated years to, that kept me from funerals or celebrations or going to bed at a reasonable hour, more even than the adventures that put me on top of cliffs or thrutch-worming up off-width chimneys or thigh deep in icy cold river water with my mountain bike over my shoulder.

I know what the word means.

I put my entire weight onto my leg. The vibrating tension-line was suddenly still. It calmed, yielding under my full weight, and, with a creak of the sun-dried webbing and a slackening in the line, my foot was supported.

I suddenly understood what John Long had meant.

John Long taught me a lot of things about climbing when I was in my twenties—our bookshelf was filled with his How to Climb books. His magazine columns on the glory days of the Stonemasters sang us to Yosemite, where we walked amidst the dust and grime of Camp 4 like acolytes, and stared up at the big walls like awe-struck ants.

Twenty years later, Long wrote Yosemite in the Fifties—the kind of coffee-table book that wordlessly advises house-guests, yes, I too have lived out of a van, yes, I too had a near nervous breakdown on a big wall and climbed through emotional collapse into my place in the tribe. In the book, Long tapped into the voice of God to tell timeless stories and to pull us all in close to the fire.

But it was when we actually spoke for a review I wrote of the book for Mountain Life Annual, that I got my moment with the grandmaster, and in that half-hour interview, I heard him say: you don't have to wait to be given permission.

His exact words were: "The torch is there for someone to grab."

"No one passed it to me. I just grabbed it. There it is. Grab it and run with it," said Long.

As I pushed past the vibration of the slackline, his words came back to me, like a kind of cosmic instruction.

Nobody passes you the torch, said the teacher.

Nobody holds the line still, or clears the way, or empties the road, or fills the auditorium, or hangs the paintings for you. Nobody climbs the crux move for you. Nobody makes things fair. Nobody divides things into perfectly even portions and writes your name on one.

You say, OK, this is me, let's step up to this experience. And everything surrenders to the weight of that willingness, to your daunted outrageous improbable wobbly gleeful wholeheartedness.

You cannot be half-hearted about edgework, or life work, said the voice that rumbled down the phone line, out of his book, out of my imagined pastiche of all the things a good teacher, a wise elder, could tell you.

You can't be half-hearted about marriage, raising kids, climbing, creative work, remaking the world or protecting wild spaces, because you will be bounced off before you have a chance to find the deep, exhilarating, steadying peace of being in the zone.

That zone is something anyone can access. As Long said, "You just have to seek it out."

And if you're lucky, there's someone in your corner reminding you, when things feel most improbable and wildly teetering, to just commit.

Long will be speaking at the World Ski and Snowboard Fetival's MULTIPLICITY event on Tuesday, April 10.