I'm having lunch with a friend when she confesses, "This climate change thing is really starting to worry me. My kids, you know? And it's so big. And these powerful people are making crazy decisions.
Jul 29, 2019 9:00 AM By: Lisa Richardson 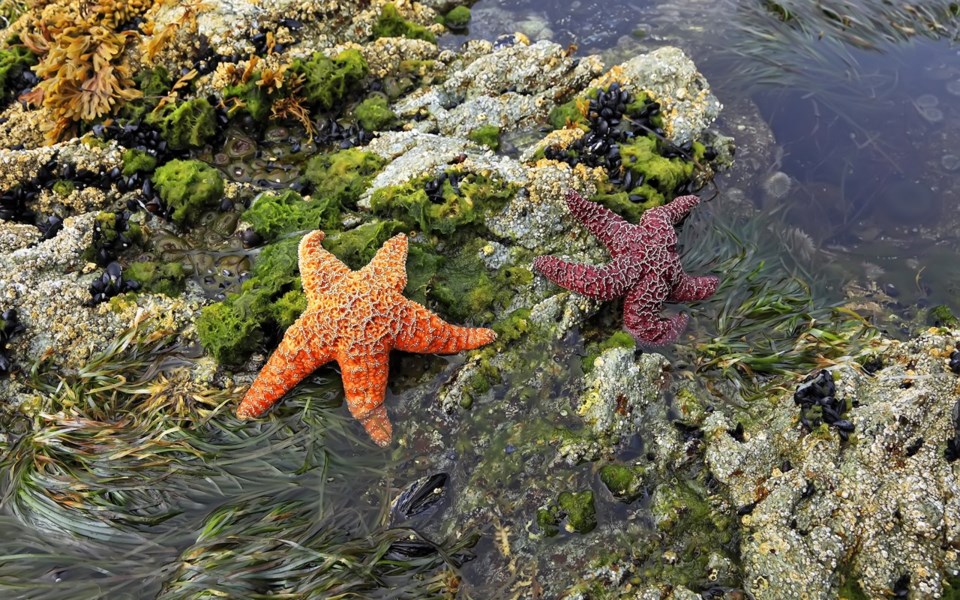 LESSON OF THE STARFISH Hold fast to what is true and worry a lot less about what other people think, because even the smallest act, done with clear intentions, has repercussions throughout the web of life. <a href="http://Www.shutterstock.com">Www.shutterstock.com</a>

I'm having lunch with a friend when she confesses, "This climate change thing is really starting to worry me. My kids, you know? And it's so big. And these powerful people are making crazy decisions. What can I possibly do?"

I have the instant urge to grab her by the arm and yell: starfish, starfish, starfish, but I'm trying to present as someone well grounded in reality, so I nod empathetically and say instead: I hear you. It's sleep-stealing stuff. Me too.

I bought myself a pack of Kim Krans' Wild Within Oracle cards in the spring. (Because I signed up for Pemberton's Natalie Rousseau's 13 Moons program in an effort to attune to the rhythms of the seasons and of nature and even, possibly, my own cycle and its mystical I-am-a-walking-talking-lunar-calendar-and-that's-kind-of-mindblowing-when-you-think-about-it aspects, and she recommended tarot but that seemed a step too witchy, and the oracle cards had a dragon on the cover, my kid being a friend to the dragon realm, and I'm trying to counterbalance my hyper-rational highly-productive self by exploring what it looks like to be more intuitive, and if I say this all fast enough you might not really follow it all and come to the inevitable conclusion that I've gone a bit cray-cray. Anyway.)

To commemorate my birthday recently, I posted a selfie, scrutizined the wrinkles in the mirror, and pulled an Oracle card from my new deck. Not a fortune, so much as an energy to tap into for the year. I felt a bit stupid doing it and a lot sheepish, but I can't deny the craving for ritual and Something-More that is peeking out from under the bed these days. I hid away, and made sure no one was around, and I worried that I was doing it all wrong, shuffling with the taboo hand somehow undermining an entire process that I'm not even sure I give credence to, but I cut and restacked the deck and pulled a card with a late-breaking burst of anticipation. What wild energy might guide me through the next year of my life?

I flipped the card over, secretly hoping to have drawn the dragon.

The face of the card was a starfish.

Are you freaking kidding me? My spirit animal for the year isn't even warm-blooded? Does a starfish actually have a brain?

The deck of cards came with a little guidebook, so I dutifully opened the page, disappointment furrowing my brow, wondering if it would be bad luck to throw the card back and cast again, and I learned that while it's beautiful and thrilling to be around a starfish, (OK, well, that's kind of nice), the starfish is often tangled up in its own desire to please others.

Crippled by vanity and shallowness? Come on. Anyone who knows how much time I spend doing my hair every day (none) can back me up here: vanity is not one of my prevailing deadly sins.

Still, I sat with it, trying to push my discomfort and disappointment gently to the side, as if moving through a beaded curtain, to peer into the room beyond. Starfish, what have you got for me?

And the starfish whispered into that quiet place of leaning in: you don't have to be so pleasing to anyone, or worry so much how this appears.

Star + fish. Humble little beach-dweller, reflection of the infinite cosmos. Too small to do much on your own, but never alone. In the rockpools or the night sky, one among many, millions, gazillions, stretching beyond sight, illuminating.

Starfish, as it turned out, had quite a lot to say.

Deep ecologist and the author of The Great Turning, Joanna Macy, has guided thousands of people through their despair at these times—the changing climate, the wave of species losses, the litany of grief-burdens. In a story she has shared often, she recounts a 12th-century prophecy that was told to her by her Tibetan teacher. This long-ago story foretells of a time when barbarians rule the world, and threaten all of us with their fragile bloated egos and weapons of mass destruction.

Resistance operatives, who would counter the despair and damage, are called Shambhala warriors, and their training develops proficiency in two weapons, which they wield up and down the corridors of power, undercover, unannounced. The weapons are compassion and "insight into the radical interdependence of all phenomena."

The story insists that both are needed: compassion to push you past your paralyzing fear, out into the world, into action, tempered with insight into the mutual belonging of everything, the understanding that "we are so interwoven throughout the web of life that the smallest act, with clear intentions, has clear repercussions throughout that web that we can barely see."

Together these two, compassion and wisdom, "can sustain us as agents of wholesome change. They are gifts for us to claim now in the healing of our world."

And so that was the message of the starfish: don't worry if it sounds crazy. These are crazy times, and there's crazier stuff being spouted every day by the leaders of the free world. Care more about what counts and less about what people think. Hold fast to what is true. And reflect, as best you can, the infinite beauty of the cosmos. Invite as many others into the starfish collective as you can, and remind each other when doubt and despair loom that we are interwoven in the web, and even the smallest acts have repercussions far behind the reach of our small brains and little swimming holes. Small, we may be, but far-reaching as the stars. And not alone. Not alone at all.