Shucking competition and 'Bloody Caesar Battle' closes out Cornucopia this weekend
Nov 15, 2019 4:00 AM By: Brandon Barrett 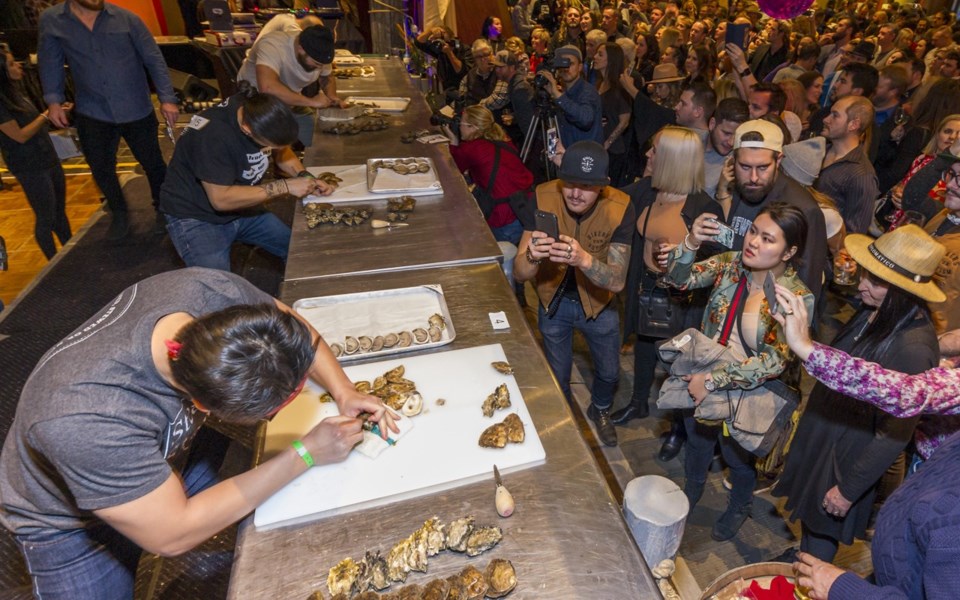 A few years ago, the organizers of the World Oyster Invitational & Bloody Caesar Battle ran into a problem: Shuckers from around the world weren't as keen to compete in the competition as they had once been.

You can blame Eamon Clark for that. The perennial Canadian champion and in-house shucker at Rodney's Oyster House (which Clark's dad owns) in Toronto went a perfect 3-0 in each of the three oyster invitationals he took part in. Turns out, Clark's fellow shuckers didn't exactly appreciate his winning ways. "Those guys are a bunch of wusses," he said with a hearty laugh. "I never got good enough by worrying about who was in the competition."

These days, Clark has taken a behind-the-scenes role at the competition, which is spearheaded by Bearfoot Bistro. He has helped round out the field of 20 invitees, who are coming from as far away as Japan, Denmark and across North America. Competitors will be timed shucking 30 oysters, with the fastest time earning the $5,000 top prize.

Clark, who has competed in shucking competitions around the world, said Whistler's invitational has grown in size and stature over the years, partly because it offers the most level playing field.

"The reason why this competition has evolved to its fullest is because it deals with three different species of oysters," he explained, referring to the Pacific gigis oyster, the Eastern Virginica oyster, and the European edulis oyster that each shucker is required to work with. "You take all three of those, along with people from those three regions and it really becomes the most competitive and fair competition, because usually the best oyster opener will win. So many of these competitions around the world that you go to only use a certain species of oyster."

Along with having a laser focus and exceptional hand-eye coordination, Clark said they look for shuckers who can have a good time onstage.

"You want somebody who is diverse in shucking different types of oysters so that they can be competitive in this situation, but you also want people who are going to go out there and put on a show and make it fun for the people observing," he said.

Of course, it's not just the shuckers who get to enjoy their handiwork. Since the event's inception nine years ago, Sawmill Bay Shellfish Company has provided Pacific oysters—more than 10,000 a year—for the scores of attendees who indulge in one of the most decadent events on the Whistler calendar.

"It's really satisfying to see so many people enjoying our oysters," said Sawmill Bay's Steve Pocock, who added that the real draw for him over the years has been the event's charitable focus. This year, net proceeds from the invitational will go to the Whistler Blackcomb Foundation to support upgrades to the Whistler Health Care Centre.

"That's the main driver for me," he said. "We've supported some really good causes over the years, from cancer research at the BC Children's Hospital to mental health last year, and that's what keeps me really keen to be still doing it and to carry on doing it."

The event has transformed over the years as it's grown from just a handful of competitors shucking in the confines of Bearfoot Bistro, to now being the closing event of Whistler Cornucopia, with hundreds expected to take in the festivities at the conference centre.

"We've noticed over the years that there is a huge interest in oysters. It's something that guests really enjoy and it's an event now that is bigger than it's ever been," said Marc Des Rosiers, marketing manager for Bearfoot Bistro. "We've established ourselves as one of the social events of Cornucopoia, and for Bearfoot Bistro, we consider this as one of our signature events throughout the year."

The drink component of the oyster invitational has become a bigger selling point over the years, as Bearfoot has incorporated a bloody Caesar battle, which is bigger than it has ever been, with 10 different spirits on offer. Mixologists will be tasked with creating the most innovative Caesar possible with their respective spirit, which includes the standard Caesar companion, vodka, along with gin, rum, sake and more. The top winner will earn $1,000.

All the Caesar creations will be available for tasting at the event, along with wine from 24 different wineries and beer from three breweries.

The World Oyster Invitational & Bloody Caesar Battle is schedule from 3 to 7 p.m. on Sunday, Nov. 17 at the Whistler Conference Centre. Tickets are available at whistlercornucopia.com.